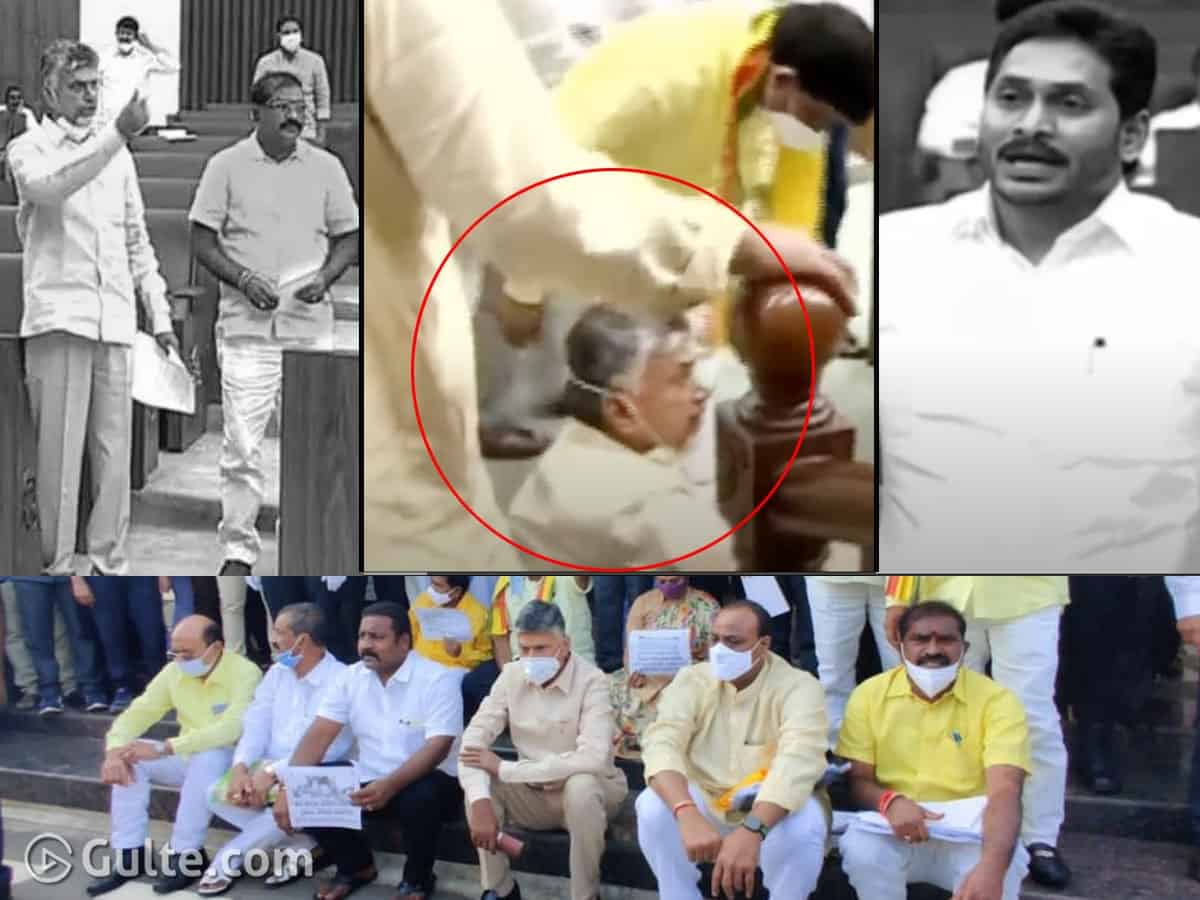 The first day of the five-day Andhra Pradesh Assembly Winter Session witnessed ruckus and several heated moments. The highlight of the day was Opposition leader Chandrababu Naidu who sat on the floor of the house. After he was denied mike to speak, Naidu took a serious objection to it and zoomed into Speaker’s podium and sat in front of the podium. An Opposition leader going to podium and sitting on the floor of the house has not happened before. It is first of its kind. And Naidu’s action invoked reaction from CM YS Jagan and other ruling party leaders.

The issue began when TDP’s Nimmala Ramanaidu questioned the government over flood relief for the the damages incurred due to recent Cyclone Nivar. CM Jagan has responded to it and stated that officials would estimate losses by Dec 15 and the compensation would be paid by Dec 31st. Not happy with CM’s reply, Chandrababu Naidu had expressed his wish to speak on the issue. While he had urged the Speaker to give him a chance to speak, the Opposition leader was denied. This irked Naidu who sat on protest and he was joined by his fellow leaders. This led to the suspension of 13 MLAs.

Earlier in the day, AP Assembly had passed Panchayat Raj Amendment Bill and Opposition TDP had staged walk out of the house. The Bill was passed without any discussion. CM Jagan had reasoned that the Bill was already debated and discussed at length earlier and sent to the Legislative Council earlier. CM Jagan said that Panchayat Raj Bill is a revolutionary and reforming bill. He said the bill is aimed at bringing a change in the Panchayat system. As the Bill passed without any discussion, this had not gone down well with the Opposition TDP who had objected the move and demanded the government to reconsider the bill. However, the government did not consider the Opposition’s request leading to their walk out. After the session resumed, TDP leaders alleged that the house started late because of CM Jagan’s “late arrival”. TDP asked the Speaker to ensure such incidents are not repeated and such precedents are not set. This was objected by ruling party leaders. Minister Kanna Babu clarified that the delay in the restarting the house has nothing to do with CM Jagan. He said it was delayed because of the TDP leaders dharna outside the house.

CM Jagan criticized TDP leaders for frequent disruptions in the house. He said neither Lok Sabha is convened nor Telangana Assembly is convened due to Covid-19 pandemic. He said AP has convened state Assembly to pass the key bills and to discuss the issues of people. He also said that the farmers of the state are eagerly waiting to hear a statement from their ‘beloved’ CM on their problems. On the whole, the first day of the five-day Assembly winter session in AP turned into a war zone with both ruling and opposition MLAs indulged into a slug fest and allegations and counter-allegations.