T’wood Meeting With CM Jagan: Balayya Invited, But He May Skip 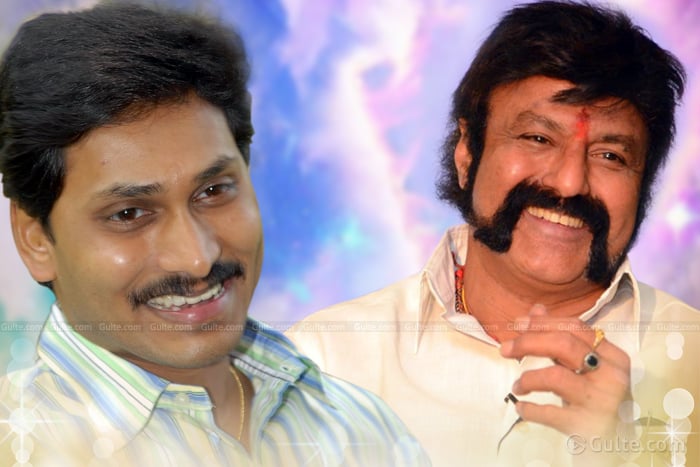 Ever since Balayya and Chiru row erupted after Balayya was not informed about the meeting with Telangana CM KCR and he expressed his dissent openly, all eyes were on whether Balayya would attend a meeting with AP CM YS Jagan Reddy, his political arch rival, or not.

Interestingly, the big wigs of Telugu film industry who are leading it and taking up its issues to CMs of Telugu states have invited Balakrishna for the meeting with AP CM YS Jagan that is scheduled to take place on June 9th at 3 PM in Amaravati. Producer C Kalyan confirmed that he had personally spoken to Balayya and invited Balayya for the same. Kalayn said Balayya had also expressed his wish to attend the meeting but cited his pre-arranged personal works as the reason for his absence.

Balayya is turning 60 on this June 10th and there have been arrangements for a grand Puja ceremony on 10th since early morning at his residence in Jubilee Hills. Since Balayya is a strong believer of God and does Pujas, he is said to be occupied with these works. According to C Kalyan, Balayya confirmed that he may not attend Tollywood’s meeting with AP CM Jagan due to his 60th birthday work on 10th June.

C Kalyan said that the objective of the meeting is to thank AP CM Jagan for his recent GO waiving off the fees for film shootings in AP. He said the meeting will further discuss how to develop the film industry and what would the industry need from AP state government.

Reiterating that there are no groups and no differences among Telugu film industry, Kalyan maintained that they are all one. He said Chiranjeevi and others who attend the meeting with CM Jagan would brief the media soon after meeting CM Jagan on June 9th.