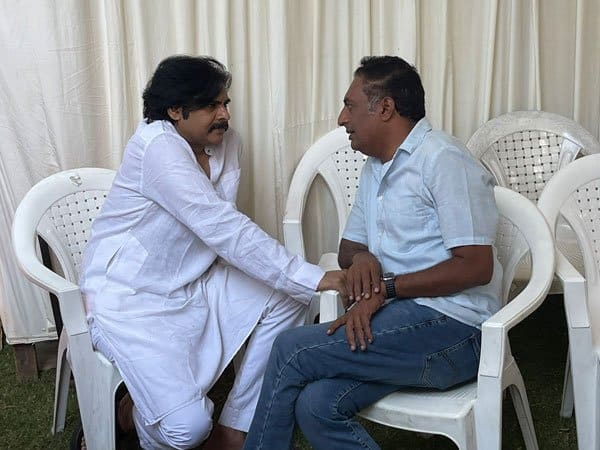 Today morning, Powerstar Pawan Kalyan graced the opening ceremony of senior hero Arjun’s directional venture, which features Vishwasen and Arjun’s daughter Aishwarya as main leads. At the muhurat event, what caught the attention of many is the banter that took place between Pawan Kalyan and versatile actor Prakash Raj.

Busiest actors, Pawan Kalyan and Prakash Raj happen to be good friends since ‘Badri’ days, and right now both are trying to make it big in politics big time. During the MAA election, Prakash Raj even claimed that he has the support of Mega family including Pawan Kalyan. After some recent political developments, it is being heard that Prakash Raj will be joining TRS Party and will contest from the party ticket in the upcoming general election. In the wake of these happenings, what would have these two spoke to each other became an interesting buzz now.
While both stood by the sidelines of the event for some time, Pawan Kalyan was seen asking Prakash to sit down, and their chat went on in an intense manner for some time. It looks like Prakash and Pawan have discussed politics only, and the former might have explained what he’s going to do in the near future. Some say that maybe Prakash might have offered Pawan to mediate a pact with TRS in Telangana or so.
However, some say that it is just a simple discussion and the two spoke about many things from ranging from films, family and regarding Film Industry strike as well.