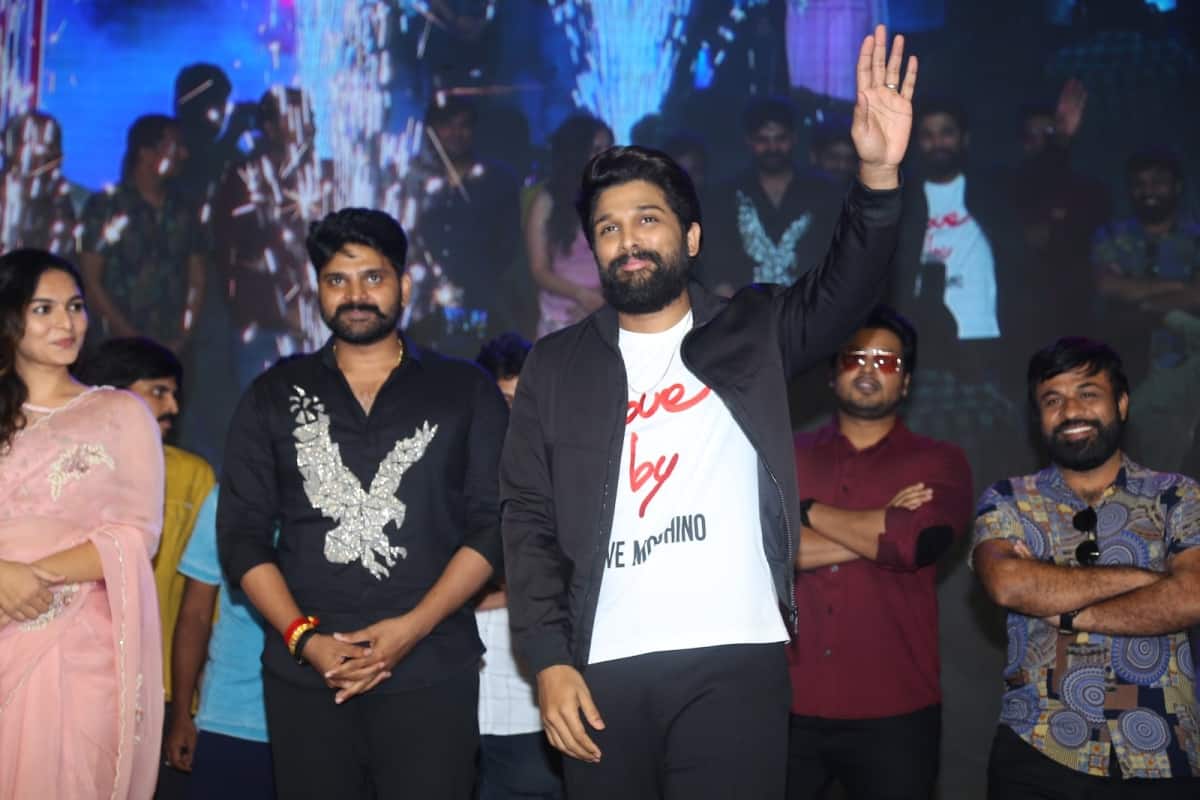 Sree Vishnu’s ambitious project Alluri will be gracing the cinemas on 23rd of this month. The team celebrated the film’s pre-release event grandly and Icon Star Allu Arjun made it more special by attending the event as a chief guest.

Director Pradeep Varma said, “The film has now got more reach with Allu Arjun’s presence. I wrote this story based on one line- police is not a person, but it’s a system. You’ll see how a honest police system works in the movie. Alluri is a fictional biopic. Sree Vishnu shows 4 different variations. He’s strained for one and half years for the film.”

Sree Vishnu said, “I believed in Alluri’s story, when I first heard the story five years ago. Pradeep Varma waited 5 years for me, which is a great thing. I hope, I gave my best for the film. We have seen many police stories. Alluri shows the 20 years life journey of a police officer. Although it’s a fictional character, all the incidents in the movie are real.

Bekkem Venugopal gave me first opportunity with Prema Ishq Kaadhal. Bunny garu called me when he was busy with Race Gurram. I couldn’t believe my luck then. I will never forget that day and I strictly follow what he advised that day. He suggested me to be cautious in story selection. He told me to do movies that have strong content. He also promised me to produce, if I come up with good stories. He told me that he’s always there for me.

When I was not getting offers and many rejected me, Bunny gave me a role in S/O Satyamurthy. I was recognized in several places like Sabarimala, Kutch etc. because of S/O Satyamurthy. I then started using the letters AA in my characters in all the movies, except for Alluri. But we’ve invited him for the event.

Single screen audience will enjoy the first half, wherein the second half will connect more to multiplex audience. But the last 30 minutes will move everybody. You’ll salute police, whenever you see them, after watching this movie.”

Allu Arjun said, “I usually say, everyone has fans, but I have an army. My best wishes to debut director Pradeep Varma. I wish Kayadu all the best. I knew producer Bekkem Venugopal since Prema Ishq Kaadhal. I wish him all the best. Last and the most important, Sree Vishnu is my favourite person.

Sree Vishnu did differently in Prema Ishq Kaadhal which had 3 heroes. Since then, I’ve been following all his movies. He delivered hits as well as flops, but there is always novelty in his movies. He’ll have that respect, irrespective of result of his movies. I like him and I have a great respect for him as well. I hope to see him reach next level.

Alluri is coming on 23rd and I wish it will get huge support from the audience. I have soft corner for Sree Vishnu. Although I didn’t want to come out for any movie promotional events, as I’m busy with Pushpa works, I came here for him.

Fortunately, films with good and unique stories are doing wonders at box office. Audience don’t care whether it’s a small film or big film. All they care about is the content. It’s a good trend actually.”