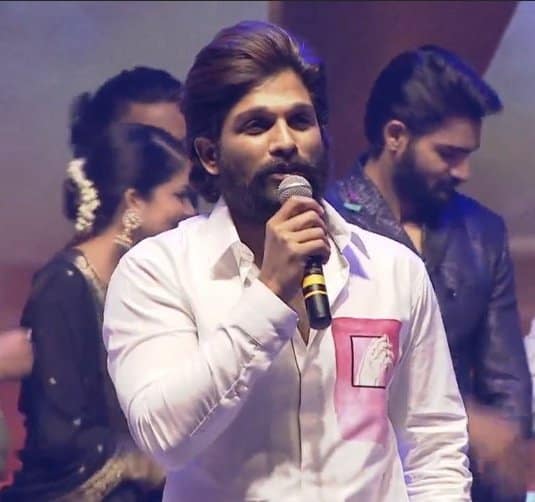 Stylish Star Allu Arjun has been the cynosure of all eyes at Chavu Kaburu Challaga pre-release function. It was a feast for fans to catch Allu Arjun who is high on energy throughout the event. Allu Arjun’s energetic speech has further raised the spirits of the fans and raised the expectations bar on Pushpa, his most-anticipated film with Sukumar that is on the floors.

Allu Arjun started of his energetic speech saying, “Chavu Kaburu Challaga Cheppali. Pushpa Kaburu Last Lo Cheppali.” This got a thunderous response from fans who hooked to his speech till the end with the excitement.

Allu Arjun heaped praises on his friend and producer Bunny Vasu. “First I’d like to talk about Bunny Vasu. He loves me so much that he renamed himself as Bunny Vasu. What I’m today is because of my father and Bunny Vasu. In fact, Vasu’s contribution is more. Vasu and I’ve been traveling for past 18 years – since my debut film Gangotri. His choice of scripts and films are always great. He has a good taste. He produced films like 100% Love, Geetha Govindam, Bhale Bhale Magadivoy. Whenever he chooses a film, the subject of the film would be interesting. When Vasu had come to me saying that he has heard a very interesting story, it has surprised me. He said he was a bit worried as he had not introduced a first-time director under Geetha Arts banner before. But Vasu was very confident of him and his story.”

Bunny thanked his ‘Baava’ Navdeep for sourcing the story. He said Geetha Arts would never forget Navdeep’s help for sourcing such a good story and would repay him.

Allu Arjun, “I can say only one word about Pushpa. Thaggede Le.” As soon as Bunny said it, #ThaggedeLe kept trending along with #Pushpa and #ChavuKaburuChallaga. AA die-hard fans were on cloud nine with Bunny assuring that the film would be a notch higher than the expectations. They started hailing him as Iconic Mass Star and said Pushpa would replace Stylish Star with ‘Iconic’ Mass Star.

Meanwhile, Allu Arjun also heaped praises on Chavu Kaburu Challaga. He said he has watched the film and it is very well done. He is all praise for debut director Koushik and his maturity at the very tender age of 26. Allu Arjun said Basthi Balaraju (Kartikeya) would touch the hearts. He said he is mighty impressed with Kartikeya’s performance. He said he felt bad that he couldn’t deliver performance with such maturity at such young age. He did very well. His genuine intention and hard work would pay off. He said Aamani is making his comeback with Chavu Kaburu Challaga. He said she delivered a great performance. He thanked every actor and technician worked for CKC. Bunny signed off his energetic speech by saying “Thaggede Le”.