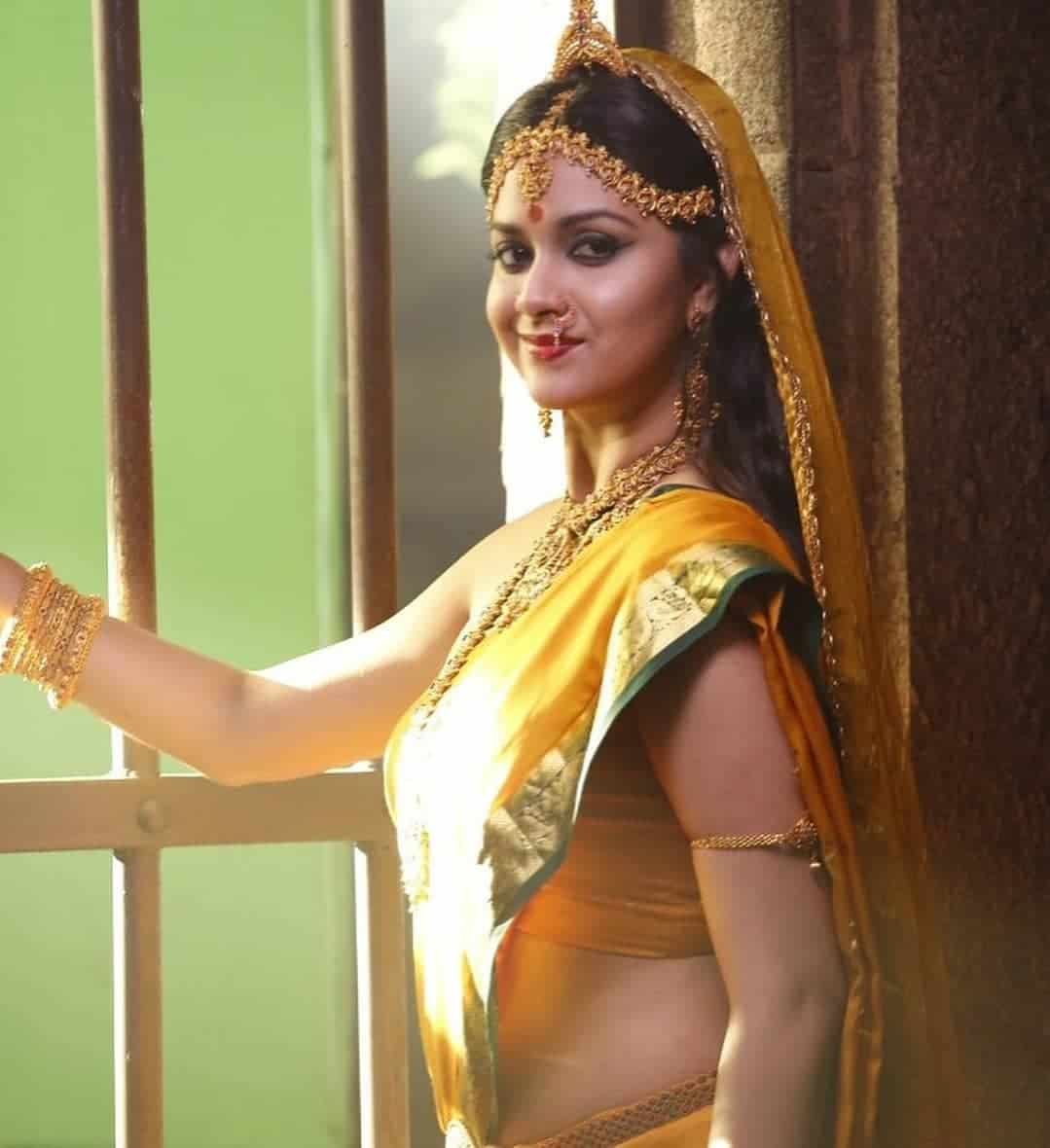 Malayalam Superstar Mohanlal, aka Lalettan starrer magnum opus ‘Marakkar: Arabikadalinte Simham’ is a long-awaited flick that fans are immensely excited for the release. Earlier the makers have unveiled the first character poster from the movie where versatile actress Keerthy Suresh awed audience with her Malayali style of dressing.

The actress once again left us spellbound with her gorgeous avatar from this epic historical war film. Keerthy will essay the role of Aarcha and she donned a yellow silk saree with a green zari border, looking like a queen. The actress wore heavy kemp jewellery, sporting an attractive grin to the cameras. She also wore chaniya choli on her head with a tiny golden crown.

Keerthy’s attractive red bindi brings in a powerful look. She looks magnificent in the new getup and indeed keeps us gushing for more such stills of her much-anticipated character. The actress also had to learn Veena for her character Aarcha who is trained in classical music. Her character has a romantic relationship with Chinali / Chiang Juvan played by Chinese actor Jay J. Jakkrit.

Today’s Keerthy’s stunning couple of pictures on the internet are going viral and Marakkar is all about the story of Kunjali Marakkar IV, the naval commander of the Zamorin of Calicut, known for defending the Malabar Coast against the Portuguese invasion. The film is directed by veteran filmmaker Priyadarshan.

The film consists of stellar cast  Manju Warrier, Suniel Shetty, Keerthi Suresh, Arjun Sarja, Suhasini, Nedumudi Venu, Innocent, Mukesh, Pranav Mohanlal, and Kalyani Priyadarshan. The screenplay was co-written by Ani Sasi. The film was produced by Aashirvad Cinemas with Moonshot Entertainments and Confident Group as co-producers. With a budget of ₹100 crores, Marakkar: Arabikadalinte Simham is the most expensive Malayalam film ever made. The film is scheduled for theatrical release on 12 August 2021.