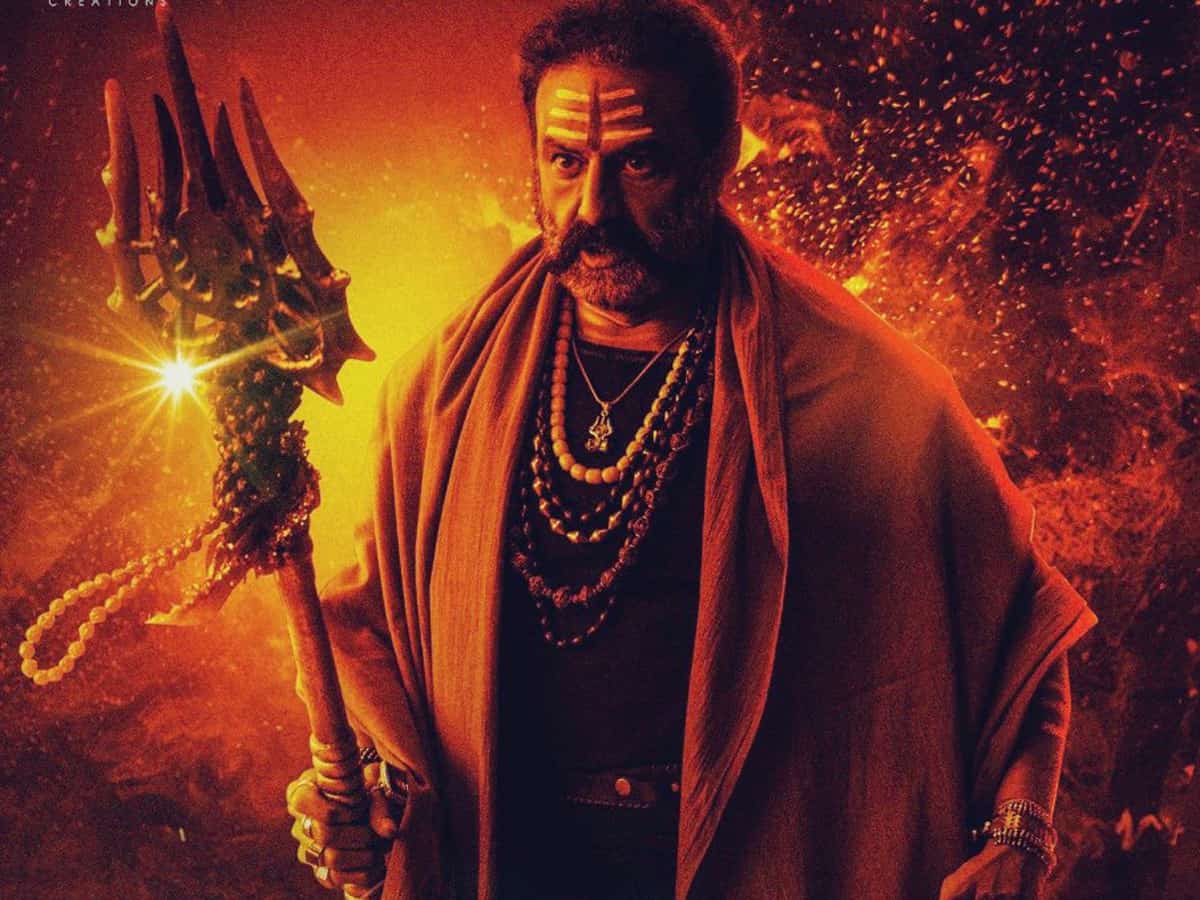 Nandamuri Balakrishna and Boyapati Sreenu’s combination has become a hit sentiment to Balayya’s fans with the previous two movies of the combo turning blockbusters. Simha and Legend were massive hits, and here comes the duo yet again with Akhanda. The trailer appeared powerful with Balayya in Akhanda look and locking horns with powerful villains. The movie hit the screens today and that too with huge openings all over. Let us walk through the review now.

Gajendra (Nitin Mehta) takes over Maharudra Peetham in Karnataka to become its head and conduct his illegal activities using his influence as Maharudra Peethadhipati. His partner, Varada Rajulu (Srikanth) a ruthless baddie owns a mine with which he starts polluting the surroundings with his mining mafia and Uranium extraction.

Murali Krishna (Balakrishna), a farmer and a social reformer in Anantapur falls in love with District collector Saranya (Pragya Jaiswal) and they both get married. Murali Krishna learns about Varadarajulu’s mafia and also that the mining waste is the reason for the death of many in his area. Murali confronts him but goes behind bars in an unfortunate scenario and his family falls in trouble due to Varadarajulu. Meanwhile, Murali’s long-lost twin Akhanda Rudra Sikander Ghora (Balakrishna) comes to rescue Murali’s little daughter. What separated Murali and Akhanda? How Akhanda saves all and what is he up to? The remaining story answers these questions.

Balakrishna is usual as Murali Krishna, but he’s shown powerful as Akhanda. Balakrishna appears as a juggernaut and unstoppable in the role of Akhanda. But the elevation scenes and the stunt scenes go beyond the limit. Most of them have the goons literally flying in the air after Balayya delivers a kick or punch. Murali Sharma’s role is elevated in the first half, and to everybody’s surprise, he does not have a single dialogue in the second half. Balayya as Akhanda looks powerful and it is a treat to fans.

Pragya Jaiswal has a full-length role as Murali Krishna’s wife and she is alright. Even she did not get to utter a dialogue in the second half, where Akhanda takes over.

Poorna aka Shamna Kasim appears as a government official who suffers badly for trying to put baddies behind the bars. Nitin Mehta is just like any other Bollywood villain and he is not any special. Srikanth looked ruthless and he can get more rugged baddie roles after this. Balayya and Srikanth’s confrontation and action scenes are just okay. Jagapathi Babu will be seen in a small role that is just limited to elevating Akhanda.

Boyapati Sreenu did not leave his formula for his movies with Balayya. He might have thought it as a success mantra to have Balakrishna in the dual role. He came up with it yet again in Akhanda too. The first half will have a jovial yet powerful Balayya and when he gets into trouble, the second one comes out even more powerful to save them all. So, Balayya knows the drill and he did everything by the Boyapati’s book.

Among the songs, Jai Balayya is colorful and may impress the fans and masses. Akhanda song is also fine. The background music is good. The cinematography is good. Editing is fine. Some dialogues are good, while some go overboard.

Most of the fight scenes are prolonged. Also, it is high time that the stunts with goons getting crushed to the pulp or flying in the air needs a change. In many scenes, it is just blood, dust, and bodies all over.

Boyapati Sreenu must be under a lot of pressure to deliver a hattrick with Balayya that too after his disastrous Vinaya Vidheya Rama. He stuck to his formula of two Balayyas, a big family, two or three villains, elevation dialogues, and extreme action scenes.

The story of a bad guy’s mining mafia obstructed by the protagonist finally the good winning over evil is as old as mountains. Boyapati goes with the same story, except that he shows Balayya as agora like no other director ever did.

The movie begins with the establishment of the villain’s role and then Balayya’s entry. From there it goes mostly on a predictable note and gives us a feeling that we watched it already elsewhere.

The first half of the movie has unwanted elevation dialogues and scenes one after the other. The love story between Balayya and Pragya Jaiswal is completely boring while there are even boring episodes like ‘Kallu’ drinking and others. There were many boring scenes where Balayya will be seen lecturing people without missing the rhyming words.

Balayya (Murali Sharma) getting arrested for a bomb blast and staying silent since then appears illogical. Though it is the director’s plan to put his calm in the second half to elevate Akhanda, it could be justified. Somehow the same Balayya comes out of jail for the climax fight scene.

The sincere officer who arrests Balayya accusing his possible hand in the blast listens to Akhanda’s preachings even though the latter makes a pile of dead bodies. The NIA officer stays along but fails to establish a connection of bomb blast to mining mafia goons, which makes no sense.

There are some cliched and over-dramatic scenes like the people giving away their lives to save the protagonist’s family, a central minister praising Balayya like a fan, and many more.

One more drawback for Akhanda is its run time. The first half appears dragged with songs and too many boring episodes, while the second half has prolonged stunt scenes.

Having said that, Akhanda is a Boyapati-Balayya formulaic commercial film that offers no surprises or great twists. Balayya’s Akhanda look and dialogues in certain scenes with apt background score are sure to give goosebumps to his fans. Finally, Akhanda remains a complete mass movie in Boyapati-Balayya template.