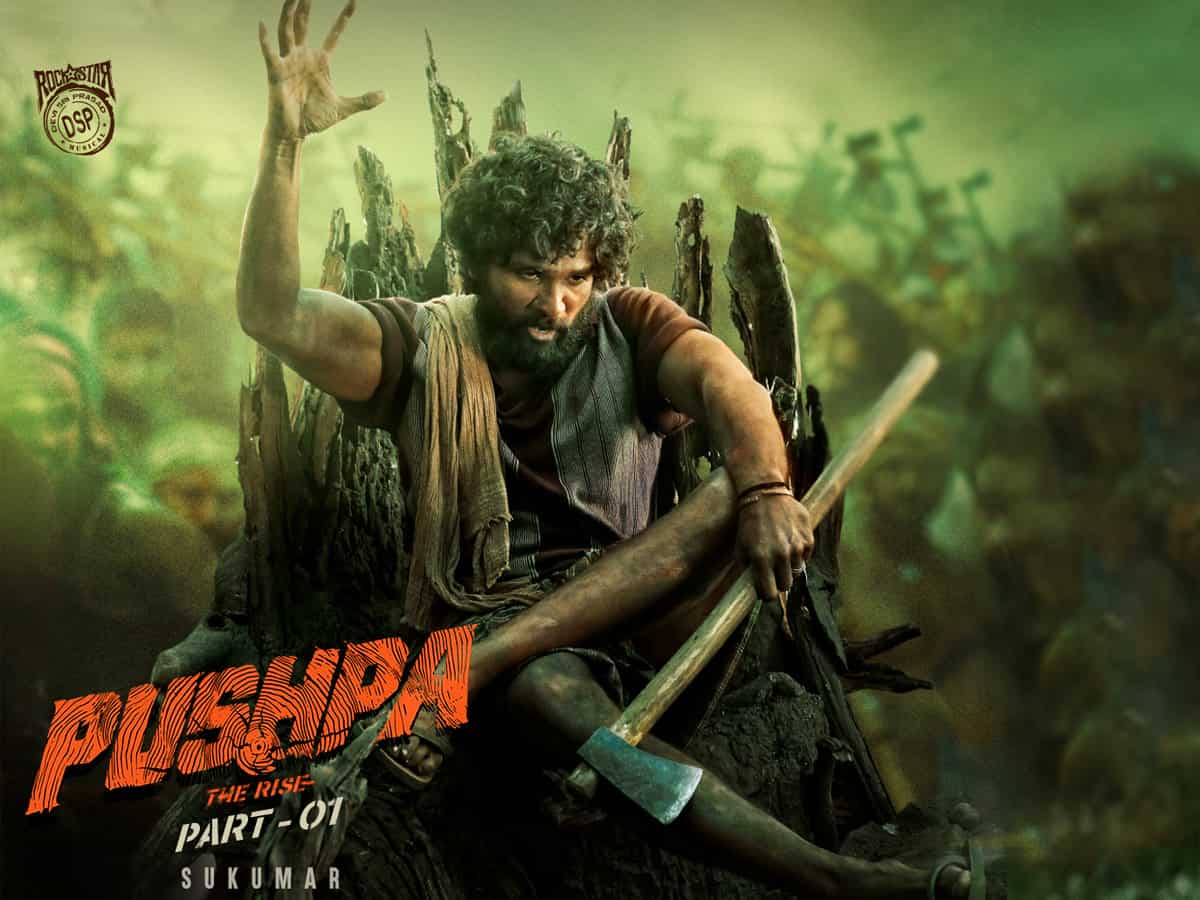 Allu Arjun never shied away from experimenting with looks or with the stories. Joining forces with his favorite director Sukumar for the third time, Allu Arjun is coming with his Pushpa – The Rise today to hit the screens. From the first look till the trailer, Pushpa has looks that are rustic and different, the scale that is large, and the characters that promised intrigue.

With many expectations and the release in five languages, the Pushpa is expected to become a landmark film for Allu Arjun. Pushpa is opening with terrific bookings and it is sure to continue for the weekend.

Well, let us see if Pushpa did meet the expectations and the hype it had around. Let’s walk through the review here to know if Pushpa is really a ‘thaggede le’ or not…

Pushpa Raj (Allu Arjun), a fearless and reckless laborer enters the business of red sander smuggling in Seshachalam forests. His work for Konda Reddy Brothers (Ajay Ghosh, Dhanunjay, and Co) impresses them and he becomes a partner with them within a very short time.

Pushpa falls in love with Srivalli (Rashmika Mandanna) while he parallelly marks his presence in the smuggling circuit. On his way to emerge as a don in red sander smuggling, Pushpa locks his horns with Mangalam Srinu (Sunil), a ruthless smuggling syndicate head.

How Pushpa takes over the syndicate of the red sander smuggling kingdom and how he deals with Mangalam Srinu, Kondareddy brothers, police and others form the story of Pushpa: The Rise.

Allu Arjun owns and completely carries the movie on his shoulders. Allu Arjun’s accent and attitude as Pushpa remain the highlight of the film. His body language and mannerisms throughout the film mark a strong impact on the audience. His presence literally blurs all others in the frame. Allu Arjun’s complete make-over with the first look surprised us, but him living in the character as Pushpa Raj simply amazes us.

Sunil as Managalam Srinu looks like a perfect baddie, but his role loses spark later on. His mannerisms and dialect work well for a few scenes. Anasuya as his wife Dhakshayani is alright and she has not got many scenes.

Ajay Ghosh appears in a different look and he impresses with his performance. Dhanunjay as Jolly Reddy is fine in his role as a womanizer. Rao Ramesh appears just in two or three scenes and he is fine.

Jagadeesh Bhandari who played the role of sidekick Keshava makes an impressive appearance in Pushpa. He gets a lengthy role and he did great in it.

Rashmika Mandanna is fine as Srivalli. Her role is very much limited to just love track and she is alright in it.

Fahadh Faasil appears for a short time in the end only to give us an intro of what is going to happen in part 2: The Rule. Fahadh is just alright and his presence as the enemy of Pushpa does not make much impact. Be it his look or his role, he does not look as serious and bad as he is tried to be shown as.

Pushpa is a film that is made in a rustic backdrop that feels is kept intact with the colors and cinematography. The forest shots, fights, and songs too were shot to match the plot.

From the songs, Dakko Dakko Meka is completely shot in the jungle and there is nothing much new in it other than what we watched on the lyrical video. Srivalli song is a melody and his slipper dance step brings a smile every time in it. Ey Bidda is a complete mass song. O Antava Oo Antava song is hot and this is the hottest appearance of Samantha. The background music sounds non-sync and ends up as a drawback.

The editing is fine and the screenplay is good. The run time bothers us during the last half an hour, that too after Fahadh Faasil enters. Also, a few scenes in the love track in the first half could have been cut short.

Pushpa: The Rise is the story of a laborer rising from rags to riches with his guts and dare. The director Sukumar who always shows a difference right from the story to making went with the standard format of a protagonist rising to power with mostly predictable scenes.

With mostly predictable ideas of the protagonist in smuggling, obvious love track, and weak villain hierarchy, Allu Arjun as Pushpa pushes the movie to a better level with his performance and dialogues. His fearless body language and Chittoor accent were so perfect he made the ordinary scenes interesting. The forest fight with blindfolded Pushpa, was pictured very well with the mix of slow motion and regular shots.

Srivalli and Pushpa’s love track often slows the movie down until something with the smuggling happens. The audience expects never seen ideas of smuggling from Sukumar, while the director chose simple old techniques, which is a small letdown.

The rise of Pushpa is shown in a few simple steps as it highlights the complete downfall of existing kingpins in the smuggling syndicate, which looks a predictable with known narrative. Few scenes like Pushpa bypassing the established big dons like Mangalam Srinu and Konda Reddy brothers are not very convincing.

With the audience having watched many gangster dramas recently, the scenes highlighting Pushpa’s challenges and how he overcomes them could have been made away from the regular template.

Sunil’s character as Mangalam Srinu makes a good start with an intriguing intro, but his presence and power take a big fall just after the next two scenes. The Rise of Pushpa is saturated at one point when the villain pyramid collapses, but just for the second part introduction, the director forces Bhanwar Singh Shekhawat (Faahadh Faasil).

The episode of Ajay looks forced where the stepbrother often tries to humiliate Pushpa with the ‘surname’, which is later used for Fahadh Faasil to trigger his rivalry with Pushpa.

The run time of 179 minutes does not really bother us until the last 30 minutes of the movie, where Faahadh comes in. The story is dragged for his elevation as bad police and the confrontation scenes with Pushpa are utmost boring. The logic of the director to ignite a rivalry between Pushpa and the new big baddie is too silly. That’s a hint of war coming with egos between Pushpa and Shekhawat.

Apart from the poor reason for the rivalry between Pushpa and Shekhawat, the appearance of Fahadh did not look frightful, instead, he looked weak much in the confrontation scene itself.

Like from the famous gangster series Mirzapur, there are residual characters that are left in Pushpa The Rise which is expected to make a big joint force against Pushpa in the second part: The Rule. The characters that are left helpless but waiting for vengeance are Bhanwar Shekhawat, Mangalam Srinu, Dhakshayani, Jolly Reddy, Ajay, and Taskforce DSP Govindappa.

To conclude, Pushpa: The Rise is a formula-based gangster drama with predictable scenes and flow. The only thing that makes it an interesting watch is Allu Arjun as Pushpa. There are a lot of thug life and taggede le moments, but they alone can’t make it a complete movie as it is depending on characterization itself. It is just Pushpa’s rise without any surprise in it.

Bottom line: Neither Flower Nor Fire