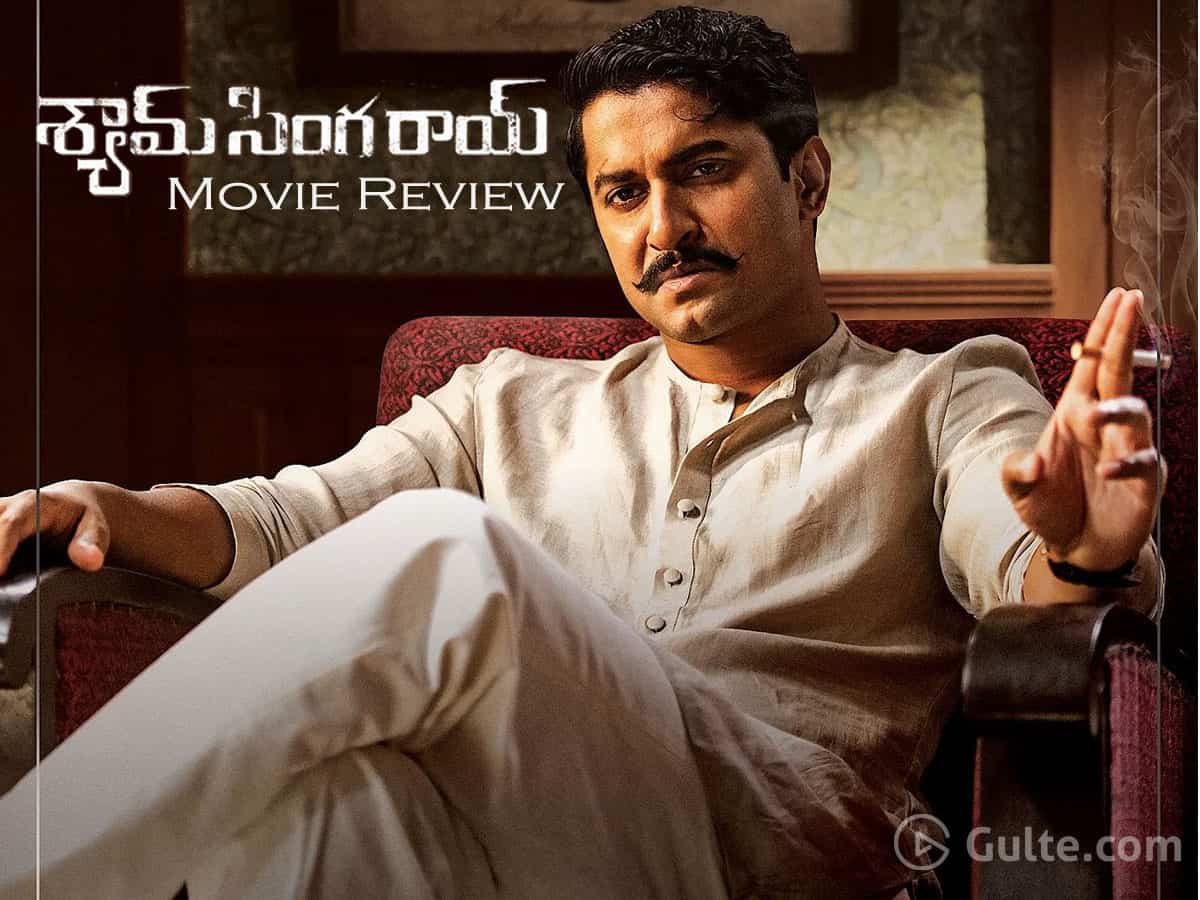 Natural star Nani has not visited us in theaters in last two years, as two films of him released on OTT. None of them were able to score big, but this time he is super confident with Shyam Singha Roy which hit the screens today. The trailer is intriguing with some hints of two stories in different timelines, but there seems to be a lot more. Well, here is the review of Shyam Singha Roy and let us walk right into it.

A film director aspirant Vasudev (Nani) makes a shortfilm with Keerthi (Krithi Shetty) to prove his skills and then scores a big success with a feature film. While he is still in the success hangover, he gets arrested for allegedly copying the story of his movie from a Begali-Telugu writer Shyam Singha Roy’s (Nani) book. Shyam Singha Roy is a writer back before five decades and a Devadasi Maitreyi aka Rosie (Sai Pallavi) was his wife. How is Vasudev able to write Shyam’s writings without even seeing or knowing them? What is the link between Shyam Singha Roy and Vasudev? All these questions will find answers in the rest of the movie.

Nani is a great performer. Actually it is a cake walk for him to act as Vasudev. It is just one of those roles as a young chap, charming and sharp, which he has done many a time. But he performed exceptionally well during the scenes where he slips into the past life from Vasu’s to that of Shyam’s. Another point that definitely needs a mention is that Nani has come out of that ‘family’ boundary for Shyam Singha Roy.

Krithi Shetty has done for the role she was given and she looked beautiful. Her role is limited to the first half and she did decent job.

Sai Pallavi gets a meaty role in the movie and needless to say, she excelled in it. Sai Pallavi will be seen as a devadasi and her dances with expressions during the Navarathri episodes are a treat to watch. Dance is her forte and she gives the best in it here. She did well with her role throughout second half.

Madonna Sebastian performs well in her role as a lawyer. Jishhu Sen Gupta, Manish Wadhwa, Rahul Ravindran, Abhinav Gomatam, Murli Sharma, Ravindran and others are fine in their respective roles.

Shyam Singha Roy is a two timeline drama that should show the contrast in between and it did. The director and cinematography team took good care to show the period scenes to match the time and nativity. Shyam Singha Roy scenes of Calcutta and Kalikapur were shot well.

The technical and artistic brilliance deserve an applause for the scenes with Sai Pallavi’s dances in the temple and also on the river bank. Some poetic scenes in Shyam and Maitreyi story have arresting visuals.

The two songs by the legend late Sirivennela, Pranavalaya and Sirivennela remain the highlights. The ‘Sirivennela’ song is soothing and the background music from it will be greeting us all through the second half. Mickey J Meyer scores his best with songs and background music.

Cinematography is top notch and so are the production values. Screenplay is perfect.

Shyam Singha Roy is an emotional love drama with supernatural elements included. The concept is new and the director Rahul Sankrityan blended it with some apt scenes. One may not be able to anticipate the poetic film making from the director of Taxiwala.

The reincarnation setting is not new, but relating it with proper elements is commendable. The clinical hypnosis episode where Nani starts going back withing his own life but sliding swiftly into his past life is shown interesting part.

Shyam Singha Roy is shown as an aggressive social reformer and a rebel poet who starts his revolt against fuedal system in his village. The director brings up some similarities between Vasudev and Shyam Singha Roy characters with few unique glimpses. They include Vasu’s book shelf having the famous Bengali film maker Satyajit Ray’s book on film making, Akali Rajyam’s 125th day poster that had a huge influence from writer Sri Sri, the posters of Bob Marley, Mani Ratnam, 12 Angry Men and many such.

The director’s screenplay amazes us when he connects Vasu’s short film Varnam to the entire supernatural reincarnation to prove it something more than just a superstition. Also he emphasised a point that Shyam Singha Roy and Maitreyi cannot have children, to rule out the possible blood relation to Vasudev and hence highlight the reincarnation point. A clever move indeed.

The episodes between Shyam Singha Roy and Maitreyi are very poetic. The dialogues and action scenes where Nani liberates Maitreyi from the cruel God-man’s temple-prison, are well executed. The particular dialogues of ‘Stree antene Garbhagudi..’ goes well and the warning ending with ‘khobordar’ sound intense.

The director also wanted his hero Shyam Singha Roy to fight against many social issues back in 1970s and he also touches the concept of honor killing, along with devadasi system and untouchability. There are few particular frames like Shyam Singha Roy getting a letter from revolutionary writer Sri Sri back then, that catch our attention and that are worth a mention.

Though the story of Shyam Singha Roy is with reincarnation element, the court scenes where the lawyer brings up some old reincarnation references appeared a bit cliche. The court taking up a copy right infringement case as a priority is a bit out of ordinary and the judge ordering a lie detector test in the same case is too much of cinematic liberty. The case was not established properly, and how it grabbed the national media attention was also not shown.

The rise of Shyam Singha Roy appears hurried, as it was shown in just a few glimpses in the song. Some parts in the second half are predictable and lengthier, but the emotional visuals between Shyam and Maitreyi balances it. The climax twist is completely new, but is sure to give a mixed feel. We have to see how it is accepted by the audience. The lack of commercial elements also becomes a drawback for Shyam Singha Roy.

Overall, Shyam Singha Roy is a classy drama that has emotional connect, reincarnation thrill and other interesting assets that can enthrall its target audiences, while it has its own setbacks.