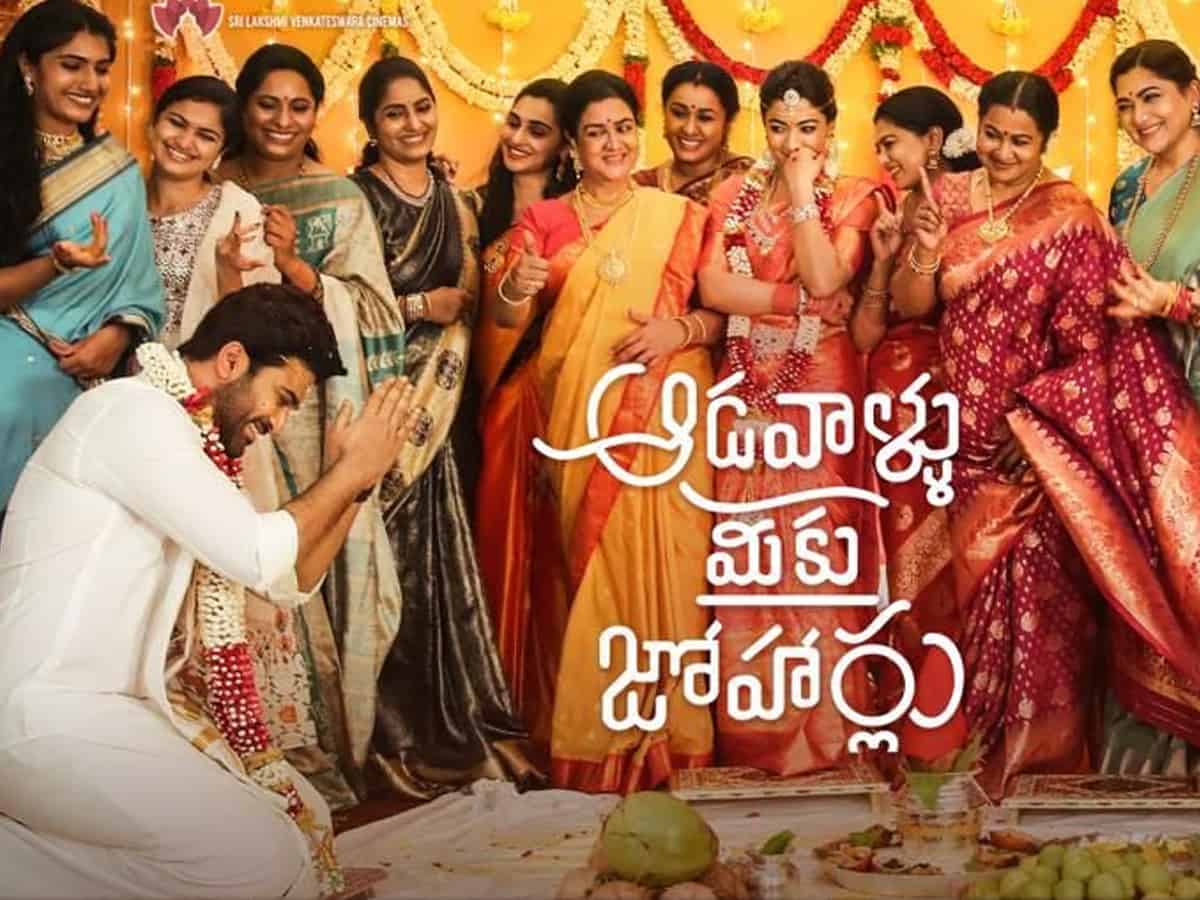 Sharwanand had been waiting for a proper hit for the last four years and now he has come with Adavallu Meeku Joharlu in Kishore Thirumala’s direction. Kishore Thirumala of Nenu Sailaja and Chitralahari fame chose a women-based story this time and the title itself speaks the same. With promising actors like Sharwanand and Rashmika Mandanna in the lead, and very talented supporting actors like Radhika, Urvashi, Khushboo, and others, Adavallu Meeku Joharlu released today in theaters. Here is the review and let us see how it is.

Chiranjeevi (Sharwanand) is the only boy in a joint family. His mother Adi Lakshmi (Radhika) and her sisters Urvashi, Sathya, and others pamper him like their own son. Chiranjeevi desperately wants to get married but the women in the family reject all the matches, as they want the best. Chiru meets Aadhya and falls in love, but this time, the problem is from her mother Vakula (Khushboo). What is the problem and how does Chiranjeevi overcomes all the hurdles to marry Aadhya forms the story

Sharwanand is a fine actor and he performs well as a pampered yet responsible young man of the whole family. He is almost in every frame of the movie and he carries the film on his shoulder mostly. His hard work and timing could have been justified if the story had more sense and depth.

Rashmika Mandanna is fine as Aadhya. She has got nothing much to perform in the movie and we do not see many dialogues for her too.

Senior actors Radhika, Khushboo, and Urvashi did what is needed for their roles as written by the director. Vennela Kishore, Sathya, and Pradeep Singh Rawat comedy works in parts.

Brahmanandam appears in a minuscule role and his comedy is completely stale.

Adavallu Meeku Joharlu has got a famous star cast with a weak storyline and narration.

Devi Sri Prasad’s songs and the background music is ordinary.

Cinematography, screenplay, and editing are fine. Few frames are very beautiful with Rajahmundry and Godavari locales.

Adavallu Meeku Joharlu raised curiosity among the family audience and particularly women who expected it to be a woman-centric strong subject in an entertaining way, but it came out as yet another routine story with dull narration.

The story is all about a young man caught between the women in the family, his love interest and her mother, and how he survives all the struggles. It is a thin storyline that could not be helped with the talented actors filled in it. First things first, with the senior actors in the family, like Radhika, Urvashi, there is a scope for a lot of family fun and comedy, but the director preferred to keep them more on the emotional side and lacks intensity. The director gives a head-up while he establishes the characters that the men will be mostly in the background just for the sake of existence.

On the other end, is Rashmika’s mother Khushboo who plays a strong lady and entrepreneur with her own set of rules against men. Well, we have seen many men-hating characters earlier, but here, Vakula’s reasons lack depth. In a way to build more of a women-power, Jhansi who appears as Khusboo’s right hand was given a loudmouth and she appears more frustrated than a strong and reasonable lady.

The first half of Adavallu Meeku Joharlu goes a bit slow. The second half of the story mainly focuses on elevating how gem of a man Sharwanand is. For that, the director chose a weak sub-story of solving a problem of love-marriage and it ends in a rather uninteresting narration.

Also, the discussion between the ladies of Sharwanand’s family and Khusboo after the latter gets to know the truth lacks intensity. It sounds more melodramatic and less logical. The belief Khushboo really stands for is not shown strong and the way she gets convinced towards Sharwanand’s conduct is equally weak. While the first half is busy establishing the characters, the second half goes forced with back and forth scenes.

There are some good dialogues here and there, but they could be more engaging and worthy with a stronger story.

Coming to comedy, Sathya and Pradeep Rawat’s single-liners slightly works. Vennela Kishore’s comedy tries to bring few laughs. There were some viral songs and lines like ‘twada Kutta tommy’ and ‘manike mage hithe’ song that were used to generate fun, and they were fine. The only comedy that really works here is Urvashi asking for the return of the tiffin box between serious scenes. Most of us could relate to it for sure.

Having said that, Adavallu Meeku Joharlu is an okay-watch movie with a lot of talented actors in it. More comedy and better songs and music could have made it an interesting watch though.