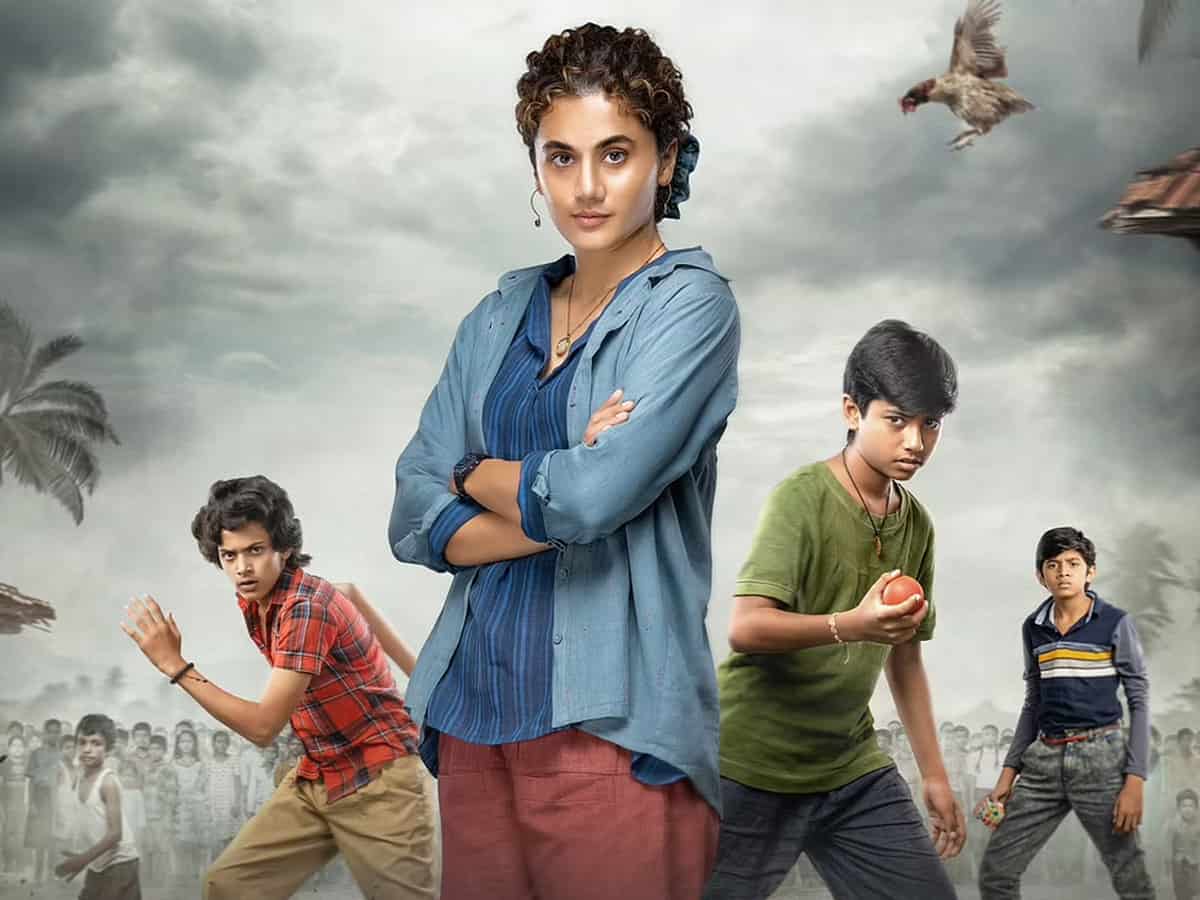 From being a glamor doll in many South films to becoming picky for story-centric movies in Bollywood, Taapsee proved herself as a talented performer. While the reason for her not doing so many Telugu films these days is known only to her, Taapsee came back to visit the audience here with Mishan Impossible.

Taapsee revealed that she had to pick this film because ‘small films’ ironically have a big heart. Rather than going for yet another career helping movie, Taapsee says she did Mishan Impossible, which is good for the craft. Well, apart from the reasons why Taapsee acted in Mishan Impossible, the trailer is interesting and so are the kids in it. Directed by Agent Sai Srinivas Athreya’s director Swaroop RSJ, Mishan Impossible gained more momentum. The movie hit the screens today and let us walk into the review.

Three kids Raghupathi (Harsh Roshan), Raghava (Bhanu Prakash), and Rajaram (Jayatheerta Molugu) are not good at studies but are aspiring filmmakers like RGV, KBC winner, and a cricketer respectively. While the dream of becoming what they wanted to stay the same, they all decide to catch the notorious don Dawood Ibrahim and bag the huge reward on him. Sailaja (Taapsee) is an investigative journalist and activist, on her mission to catch Ram Shetty (Hareesh Paredi) a child trafficker redhanded. How Raghupathi, Raghava, and Rajaram bump into Sailaja and what they all do together is what ‘Mishan Impossible is all about.

All three child artists did excellently well and they lead the whole movie. Taapsee is seen in a supporting but very much limited role and she did fine. The story has a lot of missing logic and forced scenes that push the performers like Taapsee and even the kids to do nothing to help the film.

Other actors Rishab Shetty, Suhaas, Sandeep Raj, and others appear in small roles. Hareesh Paredi appears as a baddie and he is alright. Satyam Rajesh and others are fine in their respective roles.

Mishan Impossible is a movie with a simple plot and the three kids driving it. The background music is fine by Mark Robin. The screenplay and editing are good. There are many boring scenes but the crisp run time gives relief. The production values are good, but the weak script fails to match up to them.

Mishan Impossible takes off as a plan of three kids, who are determined to catch a big shot criminal Dawood Ibrahim, and the incidents in their lives thereafter. The paths of the kids and the activist Taapsee cross and that is when she decides to do a major operation with their help.

Though the story starts on a serious note of child -trafficking issue, the gear shift to the funny lives of the three kids. Though the three boys did well in their part, their characters were not established properly.

The director’s attempt to show the kids’ ignorance and innocence in most of the scenes appear forced, though it works in some. The frauds they pull to collect money in the village are upright silly and in fact ‘impossible’ for their age. Their ignorance is like a guest role here as they can pull some big-time frauds with ease but did not know that ‘Mumbai’ is the same as ‘Bombay. There were many such silly and illogical scenes where the director went to extremes to bring out the dumb comedy from the unintelligent.

Taapsee’s role is limited to very few scenes. She is more of a supporting character for the impossible mission of the three kids. At least her role could have been serious and it was completely boring overall. Just bringing Taapsee aboard does not help it all. Giving a proper and a bit lengthy role with a thicker plot could have made ‘Mishan Impossible’ a bit more plausible.

The always-wrong answers from Raghava fail to bring laughs, neither does the cricket stuff from Rajaram. The life ambitions of the three kids and their passion for the same were never really shown properly, not they were used in the mission they were part of.

Coming to the villain Ram Shetty, the simple question of why such a big bad businessman directly handles all the ground-level stuff of child trafficking, troubles our minds. This episode of the villain sticks out big when it comes to illogical points in Mishan Impossible.

There were some parts that worked due to the innocence of the kids, and the short run time of just around two hours made it not-tough to watch the rest. Having said that, the three kids have done their job pretty well and they could have easily pulled off a better story than this. Their potential was wasted and so was Taapsee’s with a poor story. This is definitely not the film that we expect from the director of Agent Sai Srinivasa Athreya.