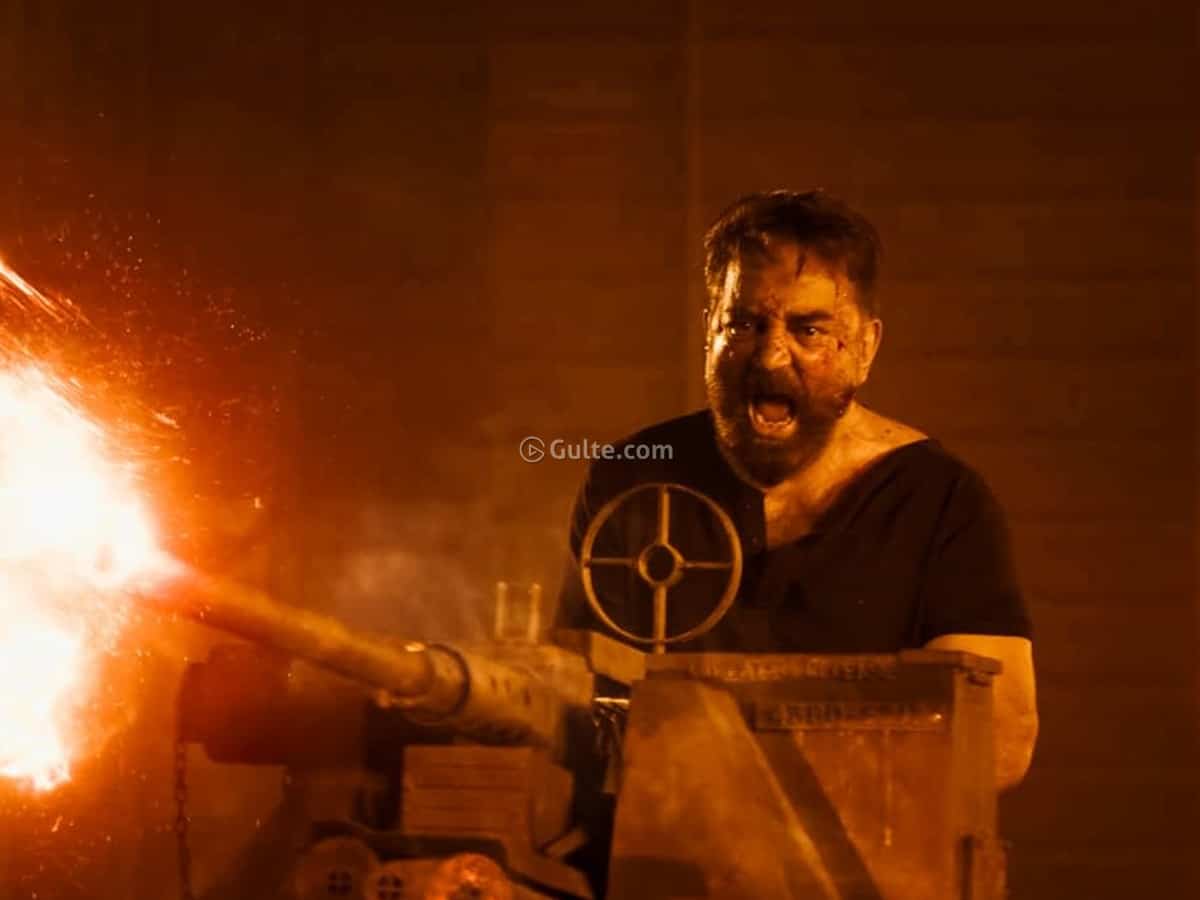 Director Lokesh Kanagaraj is known for his films like Khaidi and Master. He has teamed up with Kamal Haasan for a multi-starrer action thriller. The film’s huge cast and the trailer have raised curiosity. Without further due, let’s find out what Vikram is in store for us.

Santhanam (Vijay Sethupathi) is after his two missing containers with raw cocaine that’s worth 2 Lakh Crore, which is enough to run a parallel government in the state. He doesn’t spare anyone who is linked to it. He kills NCB officer Prabhanjan (Kalidas Jayaram) and his adopted father Kannan (Kamal Haasan) as part of it. Who is Agent Vikram? How is he connected to the mission? How does he finish Santhanam? This is the crux of the story.

Vikram unleashes top and flawless performances from its stellar cast. Kamal Haasan, Vijay Sethupathi, Fahadh Faasil are three gems of actors who delivered outstanding performances on screen. All of them have breathed life into their characters and shoulder the film in their respective ways. Kalidas Jayaram, Narain, Gayathri Shankar and Arjun Das were seen in good supporting roles. Suriya made a stunning presence at the end. Every character in the film has an important role to play in the story and take it forward. Lokesh has used the best out of all the cast.

Filmmaker Lokesh Kanagaraj has a command over his craft – writing and direction. He excelled in his craft in Vikram. He got the best technical team who ably supported him. Cinematography (Girish Gangadharan) and background score are top notch. Anirudh Ravichander elevates the scenes with his BGM score. KGF fame action choreographer duo Anbariv proved their mettle yet again. The film is loaded with high-octane action sequences. Screenplay and editing (Philomin Raj) are damn good. The shots and cuts are sharp and impactful. Camera movement is fluid and adds to the narrative. The twists are predictable though.

Telugu audiences are quite familiar with multi-starrer films. But Vikram is poles apart. It is a quintessential multi-starrer film that sets a new benchmark in this segment. We only get to see the characters instead of the actors and their rich legacy. Kamal Haasan, Vijay Sethupati and Fahadh Faasil are the best suited for their roles who thoroughly shoulder this action thriller.

The personal conflict of the protagonist and the society conflict (drug menace) both converge. This is what worked perfectly for Vikram. Lokesh Kanagaraj proved he is a brilliant filmmaker. He imbibed the emotion of father & son and how a grandfather is trying to protect his grandson, his only heir. This story is narrated in a gripping manner. The flow of the narration isn’t obstructed at all. There are no songs in the film. Vikram’s treatment is similar to that of Lokesh’s previous film Khaidi. But Vikram’s story and scale are entirely large, different. Vikram scores well in the first half. The mystery element in the first half is thoroughly maintained.

The first half runs heavily on Fahadh Faasil and Vijay Sethupathi where Kamal takes a backseat. This may be a slight disappointment to Kamal’s fans who miss Kamal. But it is like teasing a child with chocolate/ice-cream before offering a platter. The interval-twist is terrific and sets up the tone. In the second-half, Vikram aka Kannan (Kamal shows) his Vishwaroopam and he is joined by Amar (Fahadh) in fight against Santhanam (Vijay Sethupathi). The film is not flawless. It has some predictable scenes, twists.

The pace of the film works in the first half. But the film loses the pace a bit in the second half, which is a turn off. The loaded action scenes and Anirudhi’s terrific background score are the saving grace. The film is loaded with action scenes. Every action episode is designed differently to engage the audience. If you’re an action lover, it is a buffet action treat from Lokesh and Kamal. Be it the jail scene or the pre-climax fight, or even the fight of an aged maid (Agent Tina) who fights goons, each episode stands out in its own way. But the over the top action scenes put off. The action part is overdone, quite literally. The director’s fascination for guns is seen throughout. The analogy of Lion, Jungle sums up the story of Vikram and the struggle had gone through before his comeback. But Vikram’s pain and struggle should had been established well.

Overall, Lokesh Kanagaraj has delivered an outright action thriller with an ensemble cast that deserves big cinematic experience in theatres. Watch it if you’re action lover. Else, skip it.