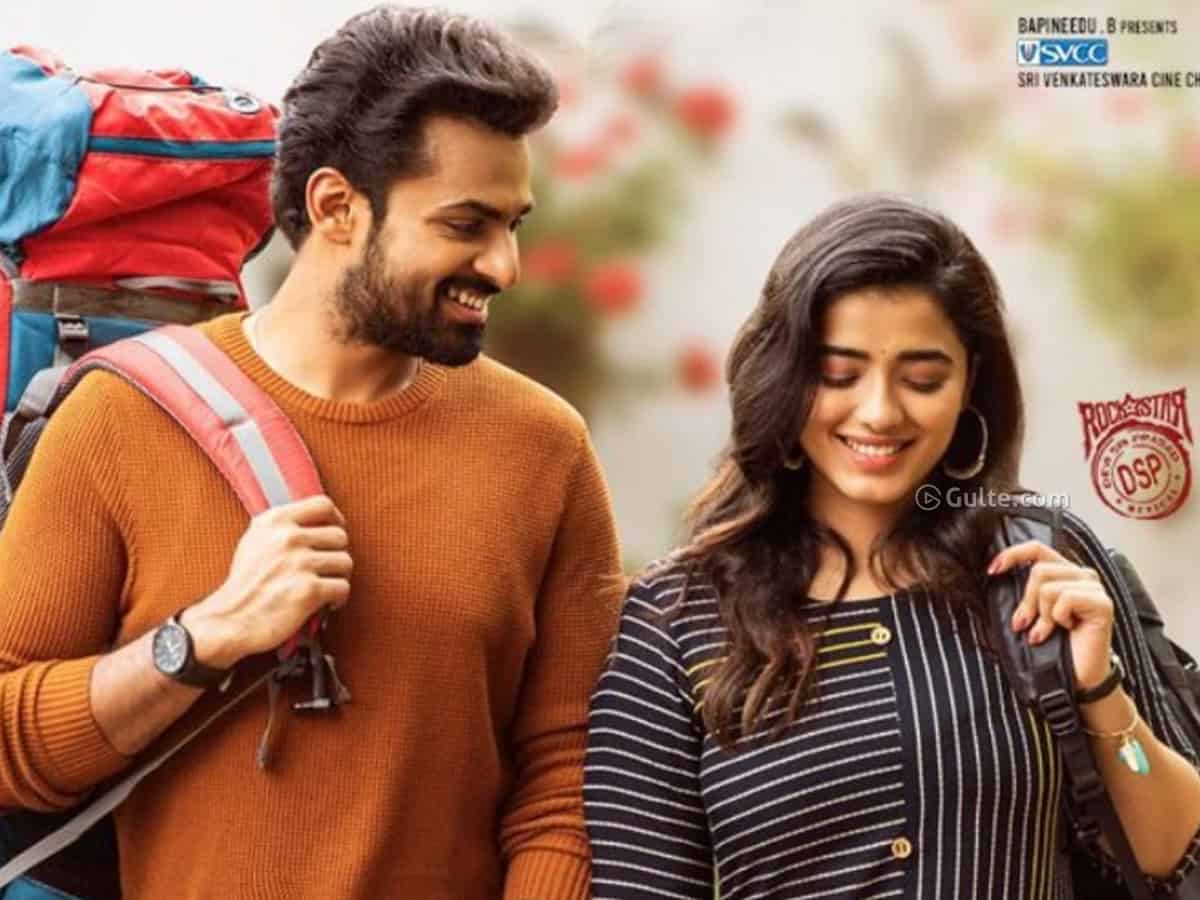 Vaisshnav Tej made a blockbuster debut with Uppena. His next Kondapolam with critically acclaimed director Krish was a disappointment. He teamed up with a Gireesayya for a romantic drama Ranga Ranga Vaibhavanga. Will he make a comeback and overcome the previous failure? Let’s find out.

Set in Vizag, Rishi (Vaisshnav) and Radha (Ketika) are childhood sweethearts who are born on the same day. Their parents Ramu are close friends and stay right next to each other which makes both Rishi, Radha gel well. They are very affectionate to each other in school until one incident makes them separate. Ego plays spoilsport. Rishi and Radha won’t talk to each other, but their love for one another only grows. How do they unite? However, their happiness won’t last long due to a major setback. What is the setback that crashes Rishi and Radha’s world? How Radha’s brother Arjun (Naveen Chandra) is connected to this? Rest of the film is how the differences and misunderstandings are resolved.

Vaisshnav gets the very weak role Rishi where he is confined to imitation of his uncles Chiranjeevi, Pawan Kalyan, and references to their songs, dialogues and films. The role he chose never let him shine. He needs to improve when it comes to expressions. Ketika as Radha is passable. She has nothing much to offer, other than doing some romantic scenes, offering glamour treats and wooing Rishi. She, however, gets ample screen presence in this weakly-written film. Naresh and Prabhu are just wasted. Naveen Chandra does over-acting at certain portions, probably because the director wanted to. Naga Babu’s guest appearance lands suddenly and abruptly whenever required. Subba Raju is reduced to a comedy villain. Comedian Satya’s comedy episode is absurd. None of the actors leave a mark.

Take stories from multiple films of the late 90s and early 2000s and rehash them and stitch them, we get Ranga Ranga Vaibhavanga. Director Gireesayya does the same thing. Neither story, nor screenplay nor treatment, nothing works. Lazy writing, predictable scenes, senseless humour, unimpressive dialogues is what Ranga Ranga has. Devi Sri Prasad’s music underscores. Songs fail to engage. Even picturisation isn’t good. Nothing works for Ranga Ranga.

Right from the opening scene, Ranga Ranga amuses us to the core. It is full of nostalgia. Several old films about friendship & love come alive in our memories. Many familiar scenes flash in our minds. It is very evident that Ranga Ranga is full of rehash of many old films. It has nothing new to offer. Young director Gireesayya plays the guessing game with the audience and tries to test the memory and knowledge of cinema. One could not help but recall films like Nuvvu Leka Nenu Lenu, Sontham and et al. And there are many references to Pawan Kalyan and Chiru’s songs, mannerisms. But none of them fail to entertain even the hardcore fans.

The problem with Ranga Ranga is it is highly predictable. None of the scenes have any impact. Pre-interval episode where Radha calls Rishi when she was in danger gives minor relief in the whole film. It was slightly better compared to the routine scenes. The medical camp sequence post second-half where Comedian Satya is made bakara and gets beaten-up adds to the woes. The humour was so bad and loud. It reminds us of Sreenu Vaitla’s slapping scenes. Each and every scene in the film is either inspired or lifted from several popular films. Another major problem is the film has no major villain which needs to be addressed well. Only misunderstandings is the conflict. That is totally mishandled.

At one point of this tiresome film, many wonder what made Vaisshnav choose such a bad script. In fact, they also doubt whether there was a script for Ranga Ranga in the first-place? Music is another big letdown. Is this Devi Sri Prasad’s music? Everytime a song comes, one looks at each other in the theatre. Some of them stare at their mobiles and some even walk out from the nearest exit.

The pace of the film is very slow. The story doesn’t move forward. It is on a predictable note. The conflict of girl’s brother vs boyfriend is as old as hills and rocks. It even recalls how Puri made the very same conflict engaging in Badri. Gireesayya just lost it and got everything wrong in the Ranga Ranga. Actors are made helpless.

The climax scene which is supposed to be emotional and make everyone unite also fails miserably due to ineffectiveness. Clearly, the direction is bad which made this weak film even worse. Overall, Ranga Ranga Vaibhavanga has nothing much to offer. There is nothing grand, only bland.

Bottom-line: Nothing Grand, Only Bland!