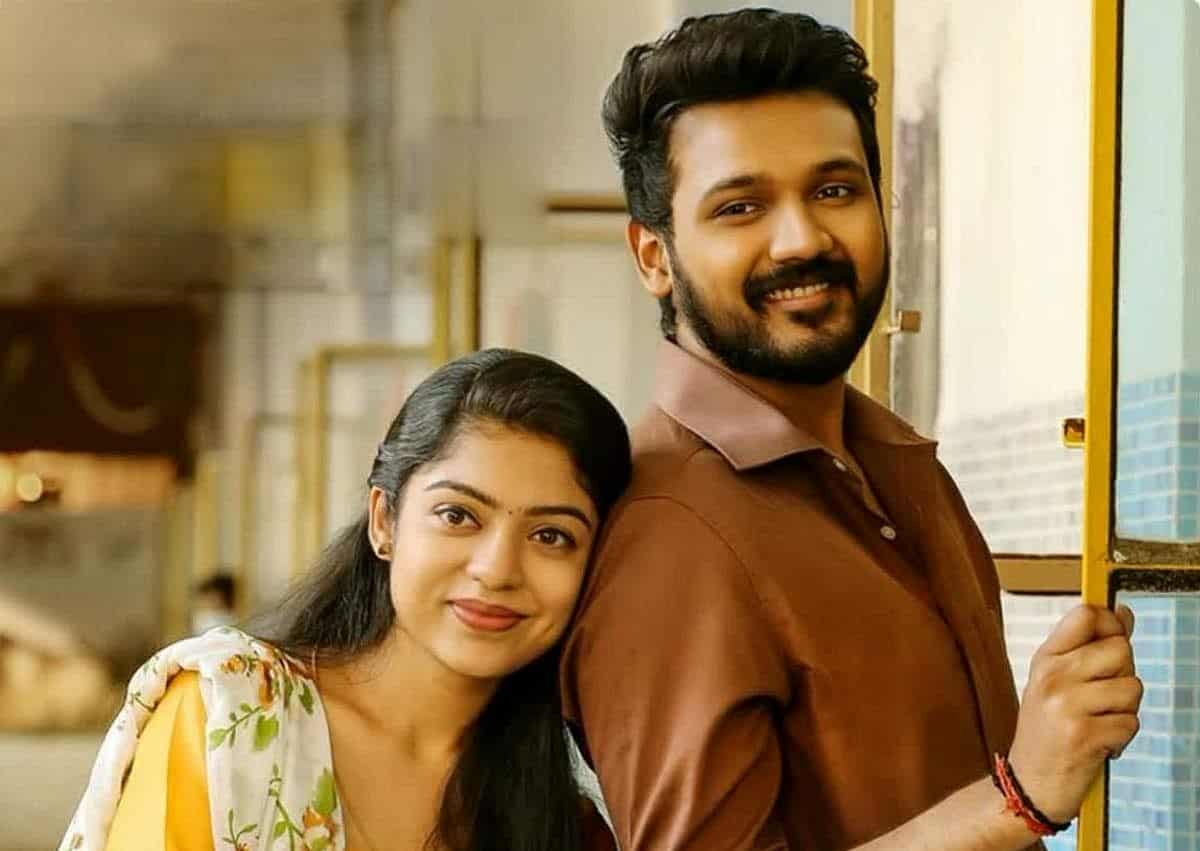 Dasara turned interesting with the clash of three films at the marquee. Swathimuthyam, featuring newcomer Bellamkonda Ganesh and Varsha Bollamma in the lead roles, raised many eyeballs by clashing with the biggies – Chiranjeevi’s Godfather and Nagarjuna’s The Ghost. Despite locking horns with star-studded films, the makers of Swathimuthyam put on a brave face and expressed their confidence. Let’s check out whether they get it right or not.

Balamurali (Bellamkonda Ganesh) is a normal, innocent guy who obeys his father (Rao Ramesh). His parents are hunting for the bride and he meets Bhagya Lakshmi (Varhsa Bollamma) at a coffee shop and instantly falls for her. She too reciprocates. However, Balamurali’s past haunts. The mistake he made in the past comes back biting and turns his world upside down. When his wedding with his love Bhagya was all set, it got cancelled on the D-day for the same reason. What was Balamurali’s problem that spoiled his wedding and how he overcame the obstacles.

Newcomer Bellamkonda Ganesh managed to perform well that is aptly required for the character where he plays an innocent guy. Varsha Bollamma has got a meaty role which has scope to perform. She did pull off the role. Varsha succeeded in holding the emotions.

Goparaju Ramana and Rao Ramesh characters are the highlights of the film. They took the film to the next level with their banter, mannerisms. Naresh adds to them in crucial scenes with his subtle yet humorous performance. No where, the characters have gone overboard while delivering comedy scenes which is why they are memorable even after one walk out of theatres. Vennela Kishore plays Bala’s friend who is a doctor. It is not the usual Vennela Kishore character of rib-tickling comedy. Kishore has got a slightly serious character yet carrying subtle humour. It is a challenging role for Kishore who gave his best. Pranathi and Surekha Vani got limited roles yet they shine in them.

Subba Raju as an envious boss appeals. Divya Sripada is alright. Harsha Vardhan is good for the role. All the characters have significance with the story and help them take it forward. The Godavari slang of the characters worked well. It resembles where the film is set up. Director Lakshman K Krishna got the best out of the film’s cast with impressive performances.

First of all, kudos to writer and director Lakshman K Krishna for choosing a sensitive point and weaving a nice humour and drama around it. No where he deviated from the subject and underlying emotion is carried throughout. Dialogues are neatly written giving depth into the characters and their emotions. Writing and direction are two strong scoring points for Swathimuthyam. Mahati Swara Sagar’s music is decent and worked in the film’s favour. While the songs are passable, the background score is impressive. Cinematography is average. Naveen Nooli’s editing is a plus. Short run-time is an advantage for this romantic comedy laced with emotion and drama.

Swathimuthyam is the underdog of Dasara season. Debutant hero (Bellamkonda Ganesh) and debutant director (Lakshman K Krishna) have arrived with a good concept film which is executed well. No doubt, the film’s premise is based on sperm donation which reminds us of films like Vicky Donor. However, the makers have just taken a leaf out of that and weaved a strong story and imbibed humour, drama. The biggest challenge was to make it suit the Telugu nativity where director Lakshman succeeded. Kakinada is brought alive as all the actors speak with Godavari slang flawlessly.

The film starts with hiccups of Balamurali’s wedding trails. He works in the electricity department who uses an ordinary bike. Each every minute detail indicates the character’s world and atmosphere around their day-to-day life. The lead actors Balamurali and Bhagya Lakshmi meet in a coffee shop and the cupid strikes. The initial scenes are just passable as they’re fillers. Director took some time to settle down initially. As the film progresses, the director gets a grip over the characters and dives into the story. The first half is passable with the twist revealed in the pre-interval portions. As soon as the problem of Balamurali is out, the real film begins. The conflict worked well.

Believability is very important. Usually, when such sensitive issues are dealt with, high-level privacy is maintained. Surprisingly, the makers have taken some cinematic liberties here. And this helped them to generate drama and humour. The comedy and emotions are in the right proportions. They are well balanced throughout the film which makes one sit through the whole film comfortably. It won’t bore anywhere. The film’s strength lies in the love story of the lead actors as well as their respective family bondings which act as strong emotion.

The second half is what worked for Swathimuthyam. There are scenes where the lead actors bond with an infant baby. They’re shown very well. It makes everyone connect to it and drive the story forward. The pre-climax portions are good and convincing. Though the film ended on a happy and predictable note, it carries out the interest till the end. The writing, direction, dialogues and cast performances all worked in tandem. Background music adds to the list. Overall, the film makes for a decent watch this festive season. It has got family elements, humour and subtle drama with neatly-driven emotions. Go for it. You won’t be disappointed.