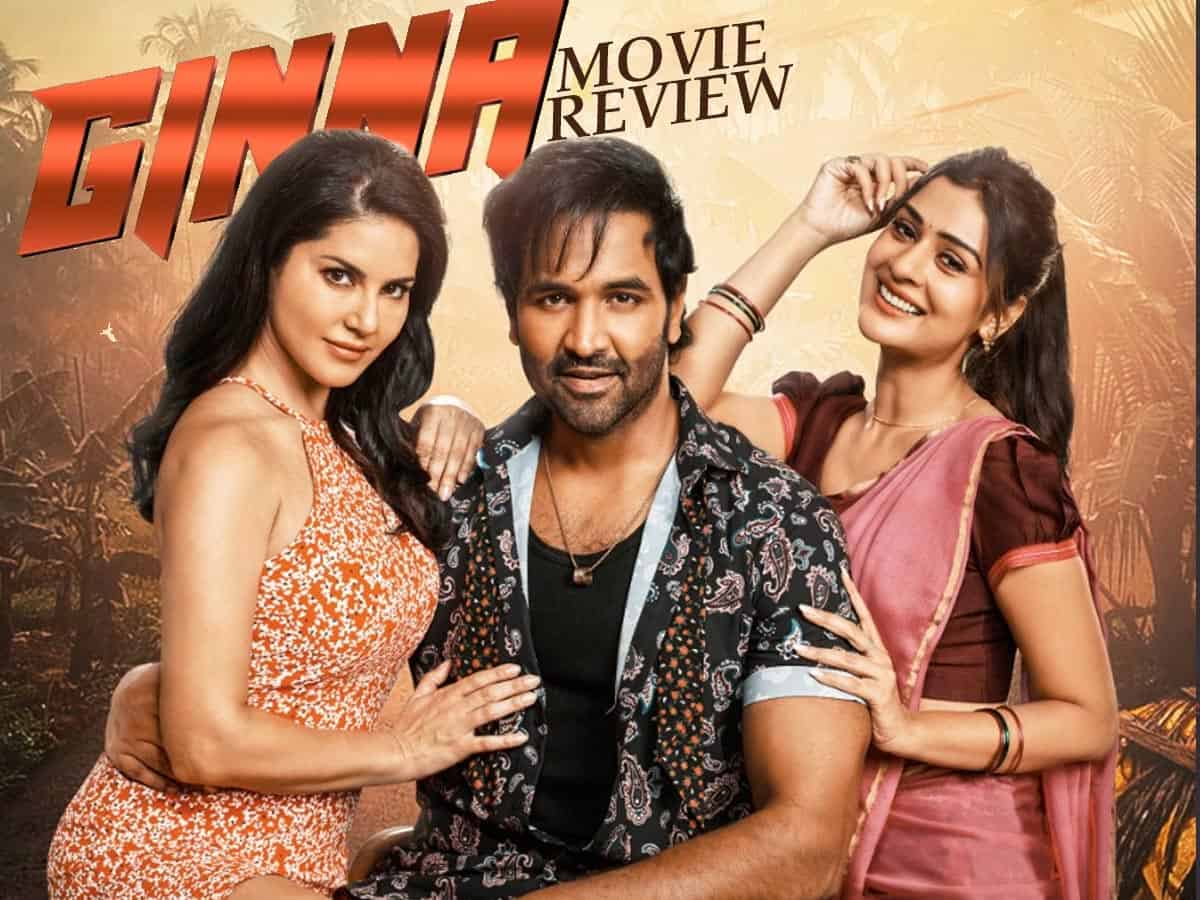 Vishnu Manchu hasn’t had a success since Denikaina Ready. The Dhee actor teams up with Kona Venkat for a comic caper ‘Ginna’ helmed by debutante Eeshaan Suryaah. Will Vishnu score success with the film and break the jinx. Without further due, let’s check out.

Plot: Gali Nageswara Rao alias Ginna (Vishnu) runs a tenthouse that runs into losses since it’s jinxed. Ginna has to repay his debts to avoid marrying the lender’s sister. He is in love with childhood friend Swathi (Payal Rajput). Return of their other childhood friend Renuka (Sunny Leone) from the US changes the equations. Who’s Renuka and what’s her motto? Will Ginna marry Renuka or Swathi?

Vishnu Manchu as Ginna delivers what is expected from him. It is a tailor-made role for Vishnu who does act with ease. He shines in the comic scenes. His combination scenes with Payal and Sunny are good. Romantic scenes are also enticing. Payal is good as village belle Swathi. She has good screen presence, but her role has limited scope to do fireworks. Sunny takes the centrestage as the film revolves around her character. She does justice for her role. Comedian Saddam Hussein as Pandu evokes laughs. He is good as the hero’s friend. Vennela Kishore and Chammak Chandra’s comedy also worked. Divi Vadthya is the surprise element in the film. Comedian Sunil is seen in a blink-and-miss cameo. Sathyam Rajesh is also confined to a brief role. The film has a slew of actors including Raghubabu, Naresh, Suresh, Gautam Raju, Annapurnamma.

Story and screenplay of Ginna has the scope to work well with the masses. It is indeed formulaic but it very much serves the purpose. The commercial aspects and out-and-out humour. First-time director Suryaah did his job well. Nowhere in the film did it look like a first-time directorial. Anup Rubens music elevates the scenes. Songs are good with a nice dose of glamour. They are placed well. The run-time is short and doesn’t bore the viewers.

Some Portions In Second-Half

Comedy is Vishnu’s forte. He has delivered Dhee and Denikaina Ready in the past. After a longtime, he finally got into what he is good at. He doesn’t disappoint. Thanks to the story and screenplay which did the magic. The treatment is hilarious without deviating from the story. The comedy elements have worked well. Dialogues are well-written and youth centric. They tickle the funnybones of audiences.

The story of Ginna is set in Rangampet village near Tirupati. It goes on a familiar path, but it takes off well. The initial scenes are refreshing. It establishes the characters and the atmosphere preparing us for what the film is going to be. But it is the pre-interval twist that totally changes the course of the film. It sustains the curiosity over the film well. Screenplay of the film penned by Mohan Babu has indeed worked for Ginna.

Plot-wise, Ginna has close resemblance with Chandramukhi. But the horror element from Chandramukhi is replaced with the crime thriller giving a psychological trauma spin. It was a smart move and it worked in Ginna’s favour. The treatment of the film is what turned totally in the film’s flavour. The early second-half has some routine portions, but they are overshadowed by the following scenes that dive into the story. Barring some predictable scenes, Ginna has its moments that appeal. Songs are good. Friendship song sung by Vishnu’s daughters Ariaana and Viviana is emotionally touching.

Go without any expectations, the film will surely surprise you and entertain you. Vishnu is back to the form and he breaks the jinx with Ginna. It’s a time-pass entertainer.