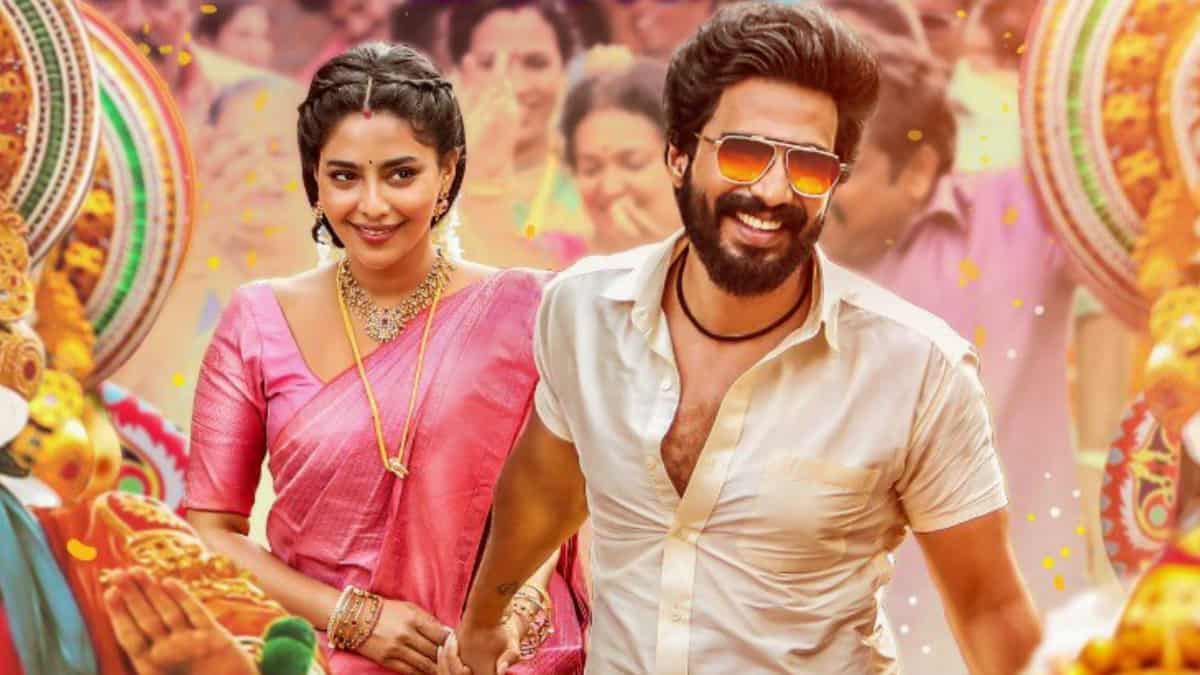 Vishnu Vishal’s Ratsasan turned out to be a career-changing film. It is remade in Telugu with Bellamkonda Sreenivas as Rakshasudu and scored decent success. Vishnu Vishal is leaving no stone unturned to make his mark in Telugu and expand his base. His last film FIR had failed to deliver. He is now back with Matti Kusthi. Let’s see whether he is successful this time or not.

Veera (Vishnu Vishal), a happy-go-lucky village guy, who lost both his parents but has properties and his uncle. Veera wants to marry a girl who is less educated than him and who has lengthy hair. However, he ends up marrying Keerthi (Aishwarya Lekshmi) who is more educated with short hair. That’s not all. Keerthi is a wrestling champion. When Veera finds out the truth after marriage, situations go worse and lead to break-up. How Veera and Keerthi get together forms the crux of the story.

Kudos to Vishnu Vishal for accepting a role that has equal scope for female lead. In fact, the female lead dominates the male lead in some portions. Yet, he surrenders to the script and makes it happen. This is where the film doesn’t get spoiled. Vishnu Vishal did a fine job as an actor. His acting as a helpless husband evokes laughs. He has to improve in action scenes though. Aishwarya Lekshmi walks away with the laurels with her award-winning performance. She excelled in the action scenes, especially Kusthi fight portions. It needs guts to do such a challenging role and she pulled it off with ease. Actor Shatru gets a cliched male coach role who is a spoiled brat. Ajay is alright. But gets sidelined. He gets an incomplete character which is okay. Kaali Venkat as an advocate, who is afraid of his own wife, shines. Karunas gets noticed as Veera’s uncle. He did bag a noteworthy role and he did justice to it. Hareesh Peradi as Veera’s coach is fine who aids the story in crucial transformation. Overall, performances in Matti Kusthi gets thumbs up.

The concept of Matti Kusthi is where the strength lies in. Writer and director Chella Ayyavu deserves applause for the concept and weaving funny scenes around. It has its own shortcomings though. Justin Prabhakaran’s background score is compelling. However, some songs lack Telugu nativity and feels like Tamil songs.

Matti Kusthi’s title might sound like an oora mass film. But in reality, it isn’t a massy film. It deals with the beautiful emotions of husband and wife placed against the kusthi backdrop. The concept of the film is what scores. Writer and director Chella Ayyavu did a splendid work as he penned some novel comedy scenes. The film has both scenic humour as well as dialogue humour. The pre-interval scenes where the facts get exposed are especially hilarious. Aishwarya Lekshmi and Vishnu Vishal breathe life into their respective characters and carry the film on their shoulders. The husband and wife emotional scenes tug at heartstrings. This is where director Ayyavu succeeded as the husband-wife track is what drives the film forward. But it is not a flawless film. It has its own limitations and shortcomings.

Like any Telugu-dubbed Tamil films, clearly Matti Kusthi (Gatta Kusthi in Tamil), this too has nativity issues. This film feels like it still has the Tamil flavour which put off some audiences. The makers have also taken cinematic liberties of getting trained for Kusthi in 15 days, beating a professional coach, et al. His idea of fighting his champion-wife isn’t convincing enough. Director Ayyavu picked up the point of male domination and male chauvinism and dealt with it nicely. It is not easy to balance the commercial elements and also give a strong message. The serious subject of male ego is dealt humorously. Some initial scenes are fresh and get the room in splits.

The film’s ultimate climax feels jarringly rushed. There is a hasty expeditiousness in wrapping up the climax fight sequence and the following hospital scene. Though the happy ending is pretty predictable, it could have been written in a better and convincing way. Overall, Matti Kusthi has its moments. It is not a bad film. It is watchable. Watch it for a fun experience along with a solid message. It won’t disappoint. Good to watch it with families too.