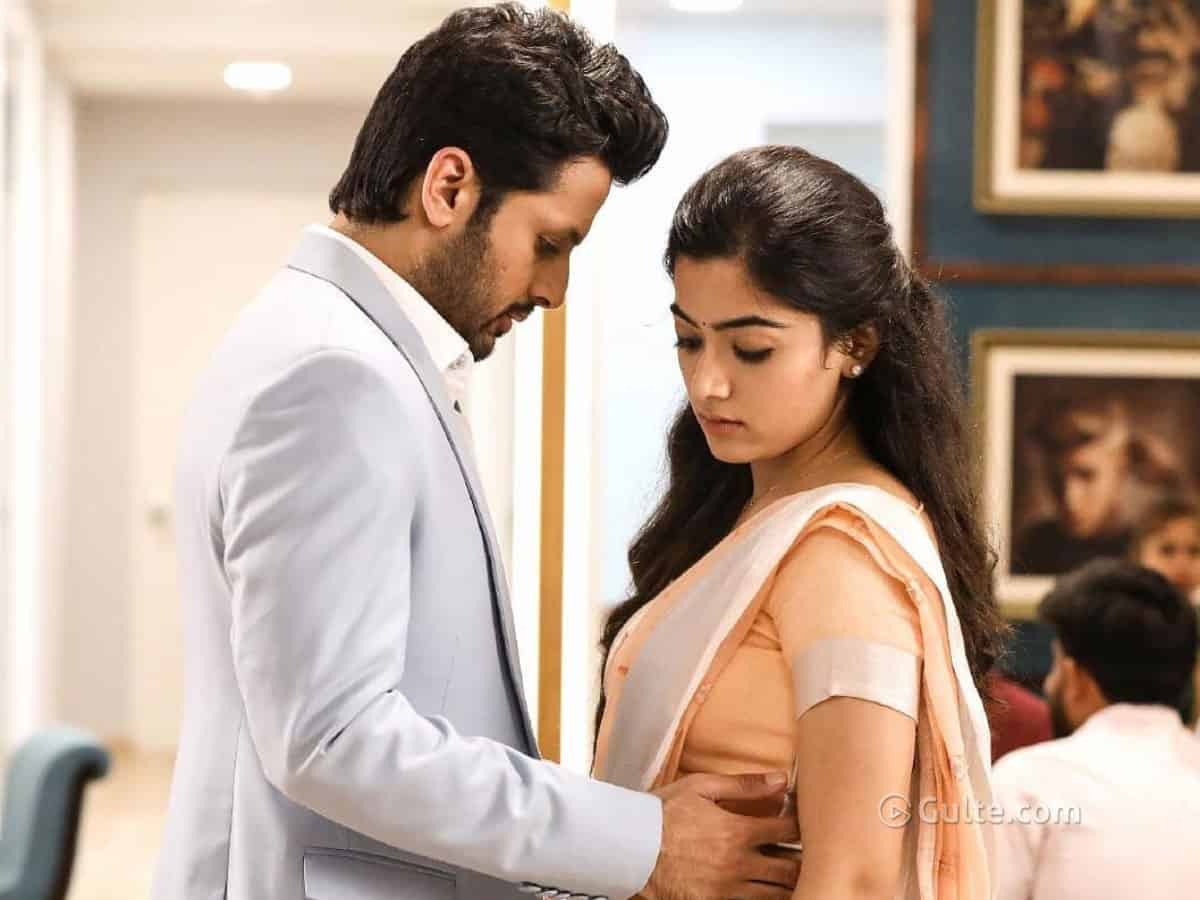 Nithin has taken a big break after a hat-trick of flops at the box office and trusted in Chalo director Venky Kudumula for Bheeshma. It is an out and out commercial entertainer with some genuinely funny moments and a well drafted template that has the potential to click with the masses.

Bheeshma (Nithin) is a single guy, who is desperately searching for a girl to settle down in life. He falls in love with a lady (Rashmika) who runs an organic store. But her dad doesn’t approve him as he doesn’t have a proper job. But her father gets to know that there is a lot that he doesn’t know about Bheeshma.

Nithin enjoyed himself playing a proper Telugu Cinema hero’s role. He looked confident in action scenes and is at ease in the romantic scenes with Rashmika. He did a fine job on a whole. Rashmika gets a decent role despite Bheeshma being a regular commercial entertainer. She is an asset to the film. Jisshu Sen Gupta is suave as a sophisticated villain. His screen presence is very impressive. Ananth Nag is okay as the person that preaches organic farming. Vennela Kishore and Raghu Babu offer plenty of laughs. Naresh, Sampath Raj and Brahmaji are good in supporting roles.

Venky Kudumula’s script is not as refreshing as his debut film, but he made sure to have all the commercial elements that pleases the entertainment seeking audience. He is good at creating humorous characters and sequences, which worked in Bheeshma’s favour. Venky handled the commercial template like a pro. He has made a minimum guarantee entertainer in spite of few flaws in the script.

Mahati’s music is one of the selling points for Bheeshma. Three songs were already a hit with music lovers. Songs are visually appealing too. Background score is alright. Editing is crisp. Cinematography is good and the production design is almost on par with big budget films. It has grand visuals as the producer didn’t compromise on quality.

Bheeshma is a regular commercial potboiler that makes sure to have elements that cater to all sections of audience. It starts off like a romantic comedy with a single and desperate guy who hits on every girl that he come across. But there is another subplot where the director talks about the importance of organic farming. This subplot becomes the main plot once the protagonist also stands in support of organic farming.

Even the villain angle is linked to this organic farming thing, which pushes the romance angle aside, thus bringing action to the forefront. Director makes sure to keep the film engaging with some well-written and neatly packaged commercial scenes. Comedy is sprinkled all over so that the organic farming stuff doesn’t seem boring. First half is passable albeit some routine stuff here and there. It ends with a bang with a nice intermission block.

Second half starts in an unexpected way and is breezy until Whattey Beauty song. Climax is a regular one but is done alright. Crisp editing works in the movie’s favour. However, director should have tried to establish an emotional connect. He doesn’t go that way despite having a plot that has scope for it. He played it safe by retaining the fun tone throughout.

Besides a good-looking lead pair, Bheeshma has good songs and comedy scenes that make it a paisa-vasool entertainer. It is a fun film that has many things in its favour to work at the box office.