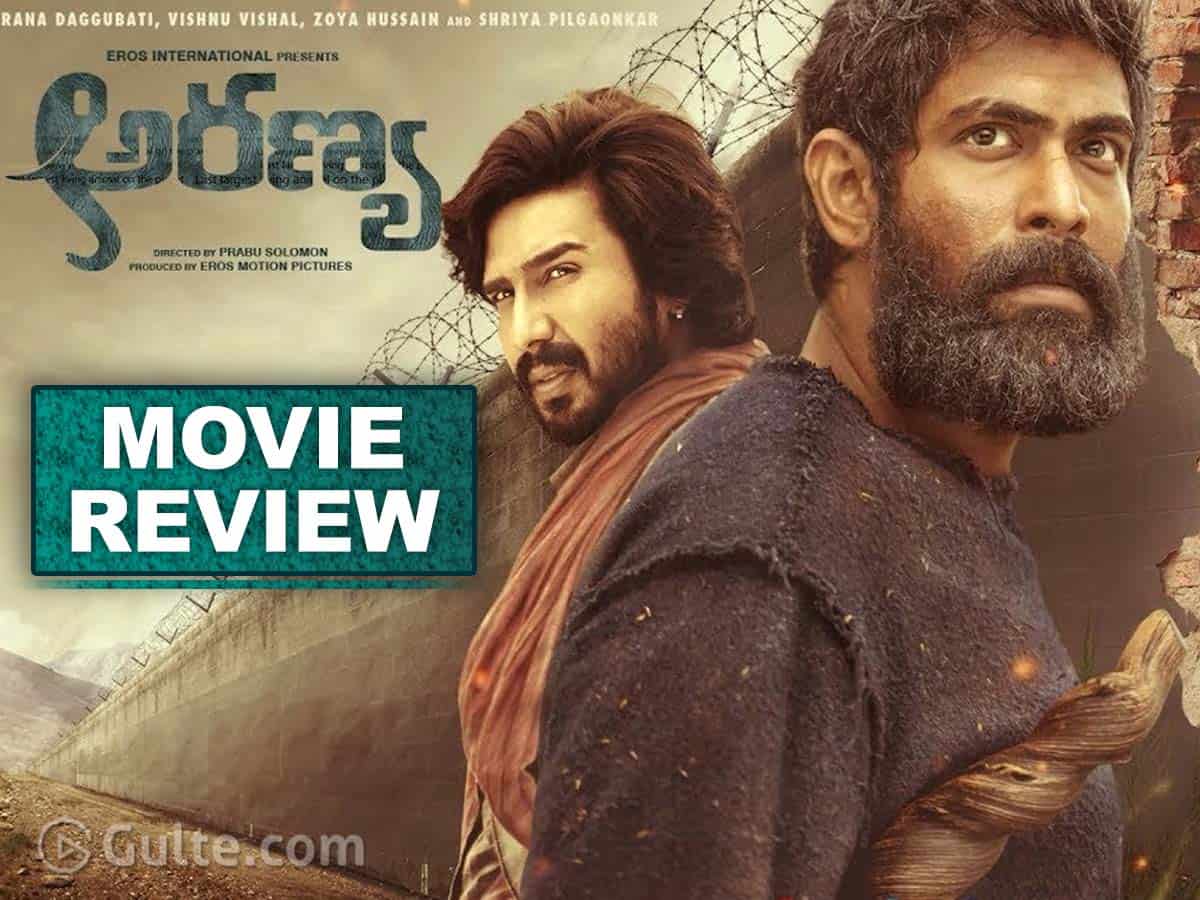 Rana Daggubati’s Aranya has caught all the attention given the Jungle backdrop. It is widely promoted as an elephant story but what ends up is a political drama. Does Aranya thrill? Does it keep audiences hooked? Head out to our review to know.

Narendra Bhupati aka Aranya (Rana Daggubati), the ‘Forest Man Of India’, empathises for the elephants in the forest in Visakhapatnam whom he befriended from his childhood when a real-estate group backed by Minister Kanakamedala Raja Gopalam (Anant Mahadevan) poses major threat to their natural habitat. It was the minister’s dream project to build a township and he chose a reserve forest area. As the wall is built around the project that blocks the way of elephants and their access to water bodies, Aranya fights against the system. Will Aranya succeed?

The film scores in terms of the technical aspects. Be it Ashok Kumar’s brilliant camera work or the flawless sound mixing by Oscar-Award winner Rasool Pookuty or the rich production design, Aranya scores on these points. Whereas it struggles with its weak writing which is throughout predictable and flat. Prabhu Solomon’s direction is a big let down. Yet his attention to minute detail works well in favour of the film. He has successfully recreated the forest atmosphere. But the messy political drama puts us off. Whenever the narrative moves away from the forest, the film turns routine and boring.

Rana’s performance is stupendous in author-backed role Aranya. He deserves a pat on the back for his guts to choose an elderly role even sporting white hairs. But none of the other characters in the film are developed on par with Aranya. Antagonist Anant Mahadevan played a typecast political baddie and his dream of township isn’t established well. The sincere journalist (Shriya Pilgaonker) tries to support Aranya but can’t really help just like the spectators. Singa (Vishnu Vishal), a mahout who takes care of his elephant Chitti, and naxalite (Zoya Hussain) got roles that distract from the story. Their love track is unconvincing and fails to connect. Even Raghu Babu’s artificial comedy fails to crack up.

Stories like Aranya are rare which one can’t come across every Friday. Given this, it has ample scope to make it deliver. But auteur Prabhu Solomon gets confused himself and confuses the audience in narrating the tale of a Forest Man. The human-wildlife conflict is a good point but that is not what the director highlights as he gets lost in the political drama that dominates throughout. He has scenes scattered all over. For instance, where does the Delhi episode lead to is not shown. Also, the contempt case against the real-estate firm is left midway not telling what has happened.

Police and government officials are shown in poor light and protecting the minister even when he breaks the law. This was shown in an unconvincing manner. Media rushes to the forest everytime. No questions please. Why does the minister visit Aranya in the prison and provoke him only to get caught by him by his neck? All these give us a sense that the film is a collage of bits and pieces which are joined arbitrarily. Even the Vishnu Vishal and naxalite lady’s characters ended incomplete. The entire naxalite layer has no significance and one wonders how it is relevant to the story. The elephant’s part should be developed more to care for. Director focuses on the protagonist and often distracts from the plot point. The court-room sequence also doesn’t turn out as expected.

While the first-half holds some curiosity on what comes next, the second half of the film where the narrative goes haywire. There are too many loose-ends and umpteen questions that are left unanswered. Several logics were missed which should not be the case when telling a story based on true incidents. The climax is pointless and just a half-cooked attempt to end the story. Neither it thrills nor it engages.

Appealing visuals, attention to minute details in forest, terrific background music, flawless sound mixing are the saving grace. On the whole, Aranya could be a better attempt provided it is written well. The intention of saving the environment is unarguably good, but that is not addressed well. Aranya leaves you wanting for more and better.