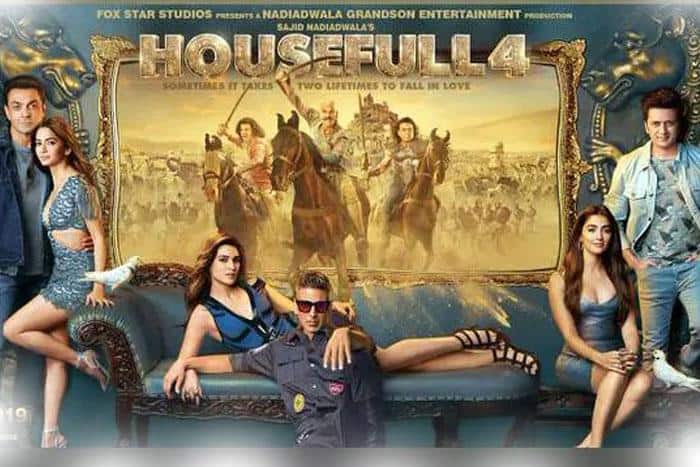 Housefull 4 is the best example for what they say ‘too many cooks spoil the broth’. Just look at how many people were involved in writing screenplay for it. Farhad Samji has taken over the direction reins from Sajid Khan after the latter faced ‘Me Too’ allegations. We can’t say who is the luckiest among the two. But the unluckiest has to be Farhad Samji, who will now be remembered for being credited as the director for this epic disaster.

Critics were always against Housefull series, but the movies had done well as they appealed to common audience. But Housefull 4 takes its audience for granted and offers them stale jokes and gags. Housefull 4 has an interesting premise, but it is turned into a mess because of outlandish writing and unimaginative direction. Even its talented star cast couldn’t save it from ending up as a disaster. Only this movie could make the super talented Nawazuddin Siddique look like a clueless clown.

Housefull 4 is the story of three couples and how destiny helps them reunite after 600 years. Three brothers (Akshay, Bobby and Deshmukh) plots a plan to get married to wealthy sisters trio (Sanon, Karbhanda and Pooja ) and they go to Sitamghad for their destination wedding. They come to know that they were reincarnated again after 600 years and are going to be hitched with wrong persons. A comedy of errors begin. Reincarnation has been the favorite theme of Indian filmmakers from decades, but none have made a comedy with this setup. Housefull 4 makers might have seen potential in this idea to set the cash registers ringing. It could have certainly clicked if there is some effort put into the writing.

Housefull 4 never raises above the mediocre mark at any point. Beginning of the film has some laughs and it seems okay until the flashback begins. This flashback portion has to be the ace for Housefull 4, but it falls flat on its face because of its crass humor and jokes that never land. Everything seems forced and even the ever reliable Akshay Kumar has been reduced to a prop in some scenes. Thanks to its tacky visual effects, the visual experience becomes even torrid to sit through. The final portions are better compared to the flashback episode, but it will need a lot of patience and strength to survive until that point. Given the previous films in this franchise, one wouldn’t have too many expectations on this one. Especially after watching that ridiculous trailer. But Housefull 4 manages to disappoint even after our expectations were set to bare minimum.

Akshay Kumar is good in parts. In fact, he has the most fleshed out character among all and he comes good with his impeccable comedy timing in some scenes. Riteish is a fine actor and he manages to click. Bobby is so-so. Among the female leads, Kriti Sanon gets a better role compared to Pooja and the other Kriti. Rana Daggubati is good in the final portions. Chunky Panday and Jhonny Lever’s over the top comedy makes you cringe in your seats. The less said the better about the remaining characters. Music is pretty average. Background score is very loud. Cinematography is good. Visual effects are unimpressive. Editing is clumsy. The film is made on a very high budget, which is evident in its grand visuals.

Director Farhad seems to be lost at times not knowing where to take this and we cannot blame him for it. He has been assigned the job as a replacement director and for that matter even Sajid Khan wouldn’t have been able to get away with this one. It is better to stay away from the theaters playing Housefull 4 as it will spoil the festival mood and make you regret the decision of watching it despite the warning signs.