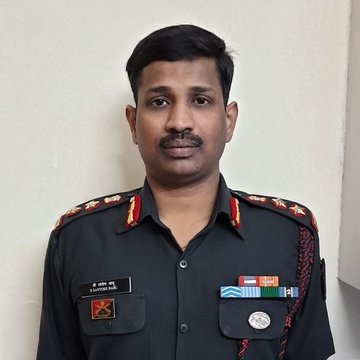 Late Colonel Santosh Babu had spoken last to his father B Upender, a retired bank manager, on Sunday i.e June 14 over a brief call before attaining martyrdom the following night. Santosh Babu, who was the Commanding Officer of 16 Bihar regiment, was martyred at the LAC during a skirmish with Chinese troops on Monday night.

He said his son had bravely fought terrorists at the border and sacrificed his life for the nation. Upender, who was bereaved by his son’s death, said, “It’s a privilege to die for the nation. I’m proud of my son.”

Santosh was the only son to Upender and his wife. In the 15-year-career, Santosh had received a commendation from the army-chief after he had fought terrorists earlier in Kupwara in Kashmir.

Santosh’s father B Upender, 61, was retired as a chief manager in SBI. Despite knowing the dangers involved, it was father Upender who had encouraged his son to join Indian Army. In fact, Upender had expected that one day he would hear such news.

“I was always aware that one day I could hear what I heard today, and I was mentally prepared for it. Everyone dies but it is a privilege to die for the nation and I’m proud of my son,” Upender, father of Santosh, was quoted as saying by the Times of India.

Upender had joined his son Santosh at Sainik School at Korukonda in Andhra Pradesh and later Santosh had got a job in Indian Army and dedicated his life to serve the nation.

Colonel Santosh’s last words with his father when he had spoken to him on June 14th about the ongoing skirmishes with China were, “You should not ask me that.” Santosh had told his worrying parents on Sunday. When his father had asked about the tense situation at the border, Santosh’s reply was, “I am not supposed to tell you anything. We can talk when I am back with you.” And these were Santosh’s last words with his father. Col Santosh had also told his father that there was a lot of difference between the on ground situation and what one was hearing from news channels.

Not many knew that Col Santosh who was working in 16 Bihar regiment got transferred to Hyderabad. But due to lockdown, Santosh got stuck in Ladakh for the past 3 months. In between, he had attained martyrdom. This is the story of Col. Santosh Babu who along with 19 other Army men were martyred in a violent face-off with Chinese troops. Let’s salute the brave men and their bereaved families who sacrificed for the nation.