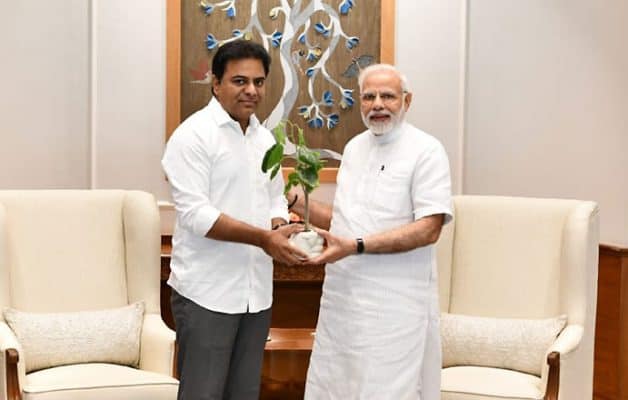 In recent times, one of the biggest jibes Prime Minister Narendra Modi has taken at the TRS party and Telangana politics is that both CM KCR and his son, MInister KTR are resorting to dynasty politics in the state. The Prime Minister urged the citizens to teach a big lesson to those who are indulging in ‘pariwarwadi’ politics. What has KTR to say about this anyway?

Responding to these remarks in an interview, KTR asked Modi to talk about the likes of Jyothiraditya Scindia, Piyush Goyal, Anurag Thakur and other big BJP leaders right now who happen to be the brand ambassadors of dynasty politics. Not only they are products of nepotism, but the minister charged that those BJP leaders keep changing parties from Congress to BJP and much more. However, he made one important remark that serves as a befitting reply to Modi’s remark.

“All said and done, family connection or dynasty thing will help you get a ticket, and I’m not denying it. But then it is Sricilla people’s mandate that made me an MLA four times in a row. Who are you to question the people’s mandate now? Though we don’t like Modi, we have to accept him as a Prime Minister because it is the people’s mandate. And the same applies to me as well, which Modi needs to understand” said KTR, in a chat.

Well, KTR has a point, whether it is YS Jagan or Nara Lokesh, only if they get people’s mandate they will be making a splash, or else family charm won’t help.