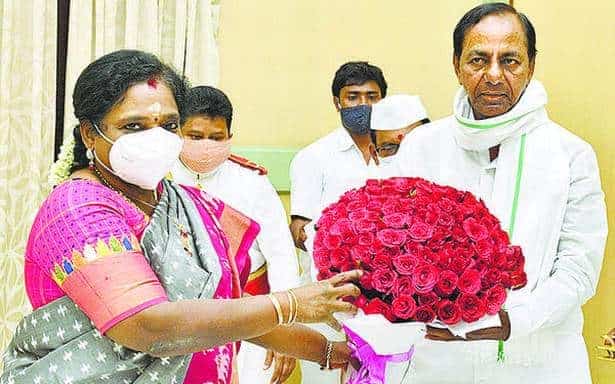 Yet again Telangana CM KCR skipped the dinner gathering called by Telangana Governor Tamilisai Soundararajan on the eve of Independence Day. Apparently Telangana CMO sources confirmed Raj Bhavan that CM KCR would attend the ‘At Home’ event and he would be at the Governor’s residence at 6:55 PM.

Telangana Governor Tamilsai Soundararajan who was at Puducherry on I-Day, rushed to Hyderabad with CM KCR confirming his attendance. At 6 PM, Governor Tamilisai landed in Hyderabad and reached Raj Bhavan.

Media reports say that Governor Tamilisai was deeply hurt by this attitude of CM KCR. “Governor was in Puducherry and only after getting confirmation that KCR would attend the event, she changed her plans and landed in Hyderabad. But KCR avoided the event, claimed the media.

During the swearing ceremony of High Court CJ Ujjal Bhuyan in June, KCR cordially met Governor Tamilisai. It was the first meeting after a year and half and political observers thought the gap between KCR and Tamilisai has been reduced but the latest incident says that it is still wide and would further widen.