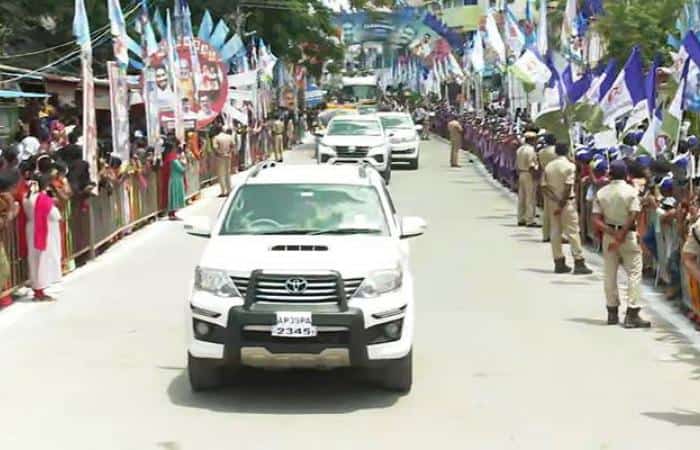 Chief Minister Jagan Mohan Reddy’s visit to various places in the state is wrought with inconvenience to the public. Wherever he goes, roads are closed, schools are shut, traffic is diverted and a curfew-like situation prevails in the place. All these measures are being taken for the CM’s safety, say police.

Yesterday, Jagan was in Tirupati to offer silk robes to Lord Venkateswara marking the commencement of Srivari Brahmotsavam. The police enforced bandh in the entire city not letting people stir out of their houses for several hours. Business establishments, several organisations and even small temples were forced to remain with their shutters and doors closed as long as the CM was in the town. Commuters faced a lot of trouble due to traffic diversion as the Srinivasa Setu works are still underway.

YCP flags, banners, arches and huge cutouts replaced the flexis and electrical cutouts of Lord Balaji, whose Brahmotsavams were being celebrated. Many TDP leaders were taken into preventive custody. The opposition leaders criticized the YCP government for spoiling the spiritual ambience in the city. It is like Jaganotsavam and not Brahmotsavam, pointed out a TDP leader.

Last week, the CM was in Kuppam to inaugurate the third tranche of Cheyutha scheme and people in the entire town were put to inconvenience with even the roads being dug up for putting up barricades and fencing. The authorities declared holiday for educational institutions and the police were deployed on bandobust duties, making it appear as though curfew was being implemented. School buses were also taken away by the police to mobilise the people to the venue of the CM’s public meeting.

In April this year, a family was left stranded in Ongole after the police took away a private SUV in which they were travelling, along with the driver, saying they require it for the CM’s convoy. The police did not heed to the family’s plea that they were on a pilgrimage and that they have children. The police said that they were helpless and just can ‘sorry’. The family had to spend the entire night in the RTC bus station in Ongole.

At that time, Jagan ordered an inquiry into the incident and even reprimanded the officials for putting the public to inconvenience for his sake. He even warned them of strict action if such incidents repeated. However, officials seem to be not caring a hoot to his orders and continue to harass the public in the name of the CM.

The officials cannot act on their own. If the CM gives strict orders, they have to abide by it. It could be that Jagan himself is behind all this prohibition and bandhs during his visit, said the TDP leaders.

Why are the police not letting people move? On one hand, Jagan and his party men say people are immensely happy with the YCP government’s welfare schemes and governance. In that case, why should Jagan fear people? Why should he avoid the public? If they are allowed to move on the roads, they may even congratulate him for his efficient administration, said a TDP leader sarcastically.

After being voted to power, Jagan’s government even made an administrative sanction of Rs 1.89 crore for providing helipad facility at his residence in Tadepalli to commute to the Assembly from his house just to avoid inconvenience to the public.

Now, is he not causing inconvenience to the public in other places? He never walks his talk but claims to be a leader who follows the principle of ‘Maata Tappadu, Madama Tippadu,” ridiculed senior leaders of the opposition parties.