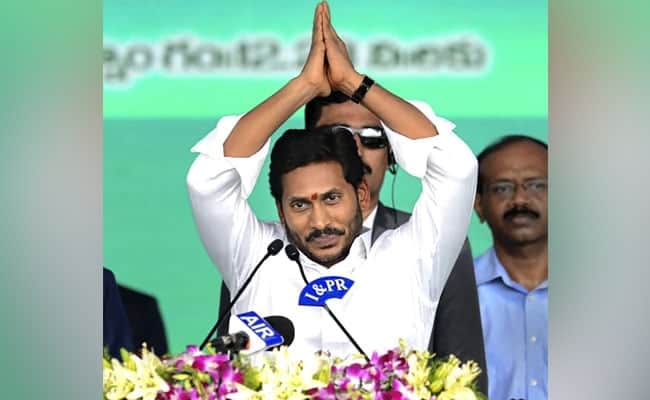 In the recent past AP CM YS Jagan is leaving no opportunity to criticise TDP chief Chandrababu Naidu given any occasion. The other day at West Godavari district, CM Jagan termed TDP as Telugu Boothula Party and today the scene repeated at Narasannapeta of Srikakulam district.

At YSR Jagananna Saswatha Bhoo-Hakku Mariyu Bhoo-Raksha scheme event, CM Jagan aimed at the TDP chief and the government program has turned into a political event. “Politics is all about accountability and those who lack this, are always hungry for power and the hunger for it is never ending.

“An individual having complete authority over his land is a right while people who don’t have such a right are called land grabbers,” said Jagan indirectly taking pot-shots at TDP chief. “Chandrababu grabs political party by backstabbing,” added Jagan.

Jagan stated that the land owners are MGR, NTR and Jagan, giving himself a compliment and drew a big comparison. “Such people have floated their own political parties and formed governments on their own. Whereas there are cheaters and backstabbers. Are you (people) ready to give one more opportunity to grabbers?” asked CM Jagan and urged the people to bless and support his YCP government. Jagan called that there is absolutely no need for the Chandrababu’s leadership and it’s time to say ‘Bye-Bye’ to Babu and send him home.

These comments from CM Jagan come in the light of TDP chief Chandrababu making a big statement on his political retirement. Last week at road rallies in Kurnool, Chandrababu added that the state has gone backwards and if TDP is voted to power, he would revive the growth and bring back the investments which AP needs desperately. Else it would be his last election, stated the TDP supremo.

Nevertheless Chandrababu’s political retirement comments have raked up a huge uproar and have become talk of AP politics. Did Jagan sense a change in people’s mood and is aiming at Chandrababu frequently?