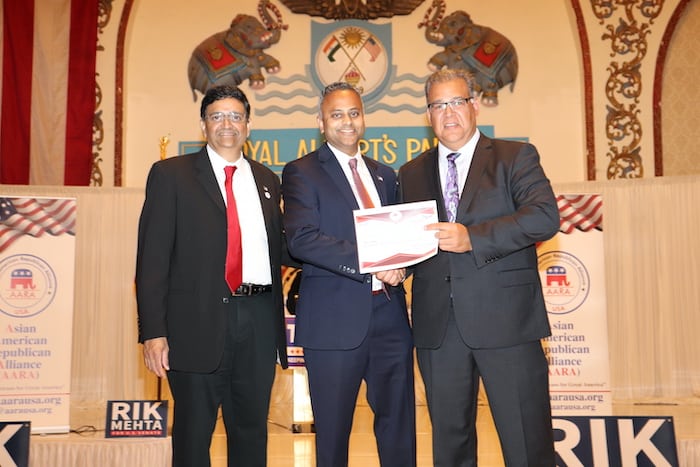 The Asian American Republican Alliance had a grand launch with an inaugural dinner featuring Candidate for US Senate Rik Mehta on September 30th 2020 at Royal Albert Palace in NJ.

AARA Chairman Sridhar Chillara spoke of the importance of being involved in the political process for Asian Americans was especially emphasized and the fact the Republican Party has actually been more receptive of Asian Americans such as Nikki Haley, Bobby Jindal and now Rik Mehta in New Jersey.

Asian Americans, He spoke about how the numbers can make a difference in a state like New Jersey towards tilting it away from being a solid Blue state. Mr. Chillara invited Asian Americans to stop shying away from the political process and register to vote and to join the Republican Party which closely aligns towards the traditional conservative values of many Asian Americans.

NJGOP Chairman Doug Steinhardt assured his support to all Republican Candidates up and down the ballot with special emphasis on the Congressional seats they hope to flip this year in New Jersey.

MCRO Chairwoman Lucille Panos talked of how she was once a democrat and has now walked away once she realized what the Democrat party really stood for.

Dr Dhaduk gave a rousing speech on how Democrats are encouraging the creation of a welfare state and tearing down traditional American values such as hard work and self-reliance.

Other speakers included Gautam Patel who rendered Hindi poetry on the demolition of democracy and liberty by the Democrats.

Jesal Amin and Brajesh singh who are respectively campaigning to be mayors in East Brunswick and Piscataway made their campaign pitches.

AARA NJ State President and Somerset County GOP 2nd Vice-Chair Ravi Kolla spoke about supporting all Republican candidates and party affiliation forms and voter registration forms and thanked all the supporters of the event. Finally a vote of thanks was given by AARA NJ State Director and Middlesex Country chair for AARA, Dharmesh Patel.

The event was compered by Nimish Patel and Samir Rawal. For people who want to join or know more about Asian American Republican Alliance (AARA), please visit the website at www.aarausa.org or email at info@aarausa.org.