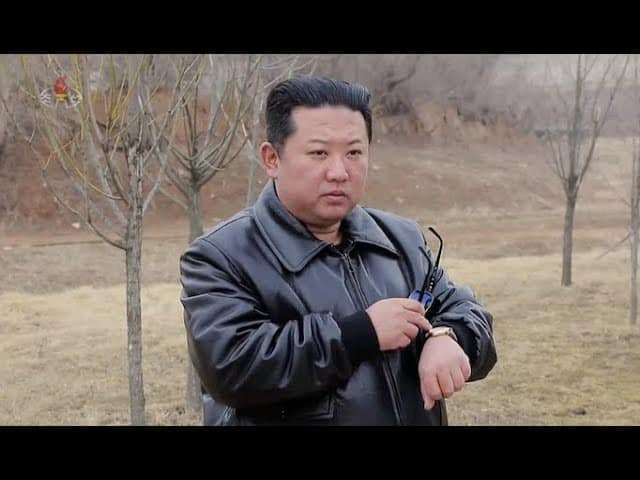 The Supreme leader of North Korea, Kim Jong-Un surprised everyone a few months ago with his drastic weight loss transformation. Today, in a new video by the state media, he is seen making a cinematic entry clad in a plush leather jacket and sunglasses. North Korean state media announced the launch of Pyongyang’s largest-ever intercontinental ballistic missile with an attempt at old-school Hollywood flair on Friday.

North Korea’s Hwasong-14 has a potential range of 8,000km – although some studies suggested it could travel as far as 10,000km if fired on a maximum trajectory. This would give Pyongyang its first truly intercontinental ballistic missile, capable of reaching New York. Its Hwasong-15 missile is believed to have a range of 13,000km, putting all of the continental US in its sights.

The video shows Kim Jong Un walking in a stylish manner, flanked by generals. The group prepares to fire the giant Hwasong-17 missile — Pyongyang’s first ICBM test since 2017. With the slow-motion visuals and suspenseful music, while the camera angle looks dramatic, netizens are in utter surprise. A scene where two generals and Kim check their watches and prompt soldiers to move the enormous missile into position by whipping sunglasses is beyond imagination.

Moreover, a dramatic countdown scene with zooming and high dynamic ranges during the launch shows soldiers shouting “fire!”. Cheong Seong-chang of the Center for North Korea Studies at the Sejong Institute said the style of the video shows Pyongyang’s increasing confidence in its military capabilities. “They have gained confidence in their military power to the point where they feel comfortable making it into a movie and enjoying it,” he said.

For the unversed, North Korea introduced a new law in 2021 that sought to stamp out any kind of foreign influence, punishing anyone caught with foreign films or clothing. Meanwhile, this missile launch on Thursday was called a “breach of the suspension of intercontinental ballistic missile launches promised by Chairman Kim Jong Un to the international community,” South Korea’s President Moon Jae-in said in a statement. “It poses a serious threat to the Korean peninsula, the region and the international community,” Moon said, adding that it was a “clear violation” of UN Security Council resolutions.