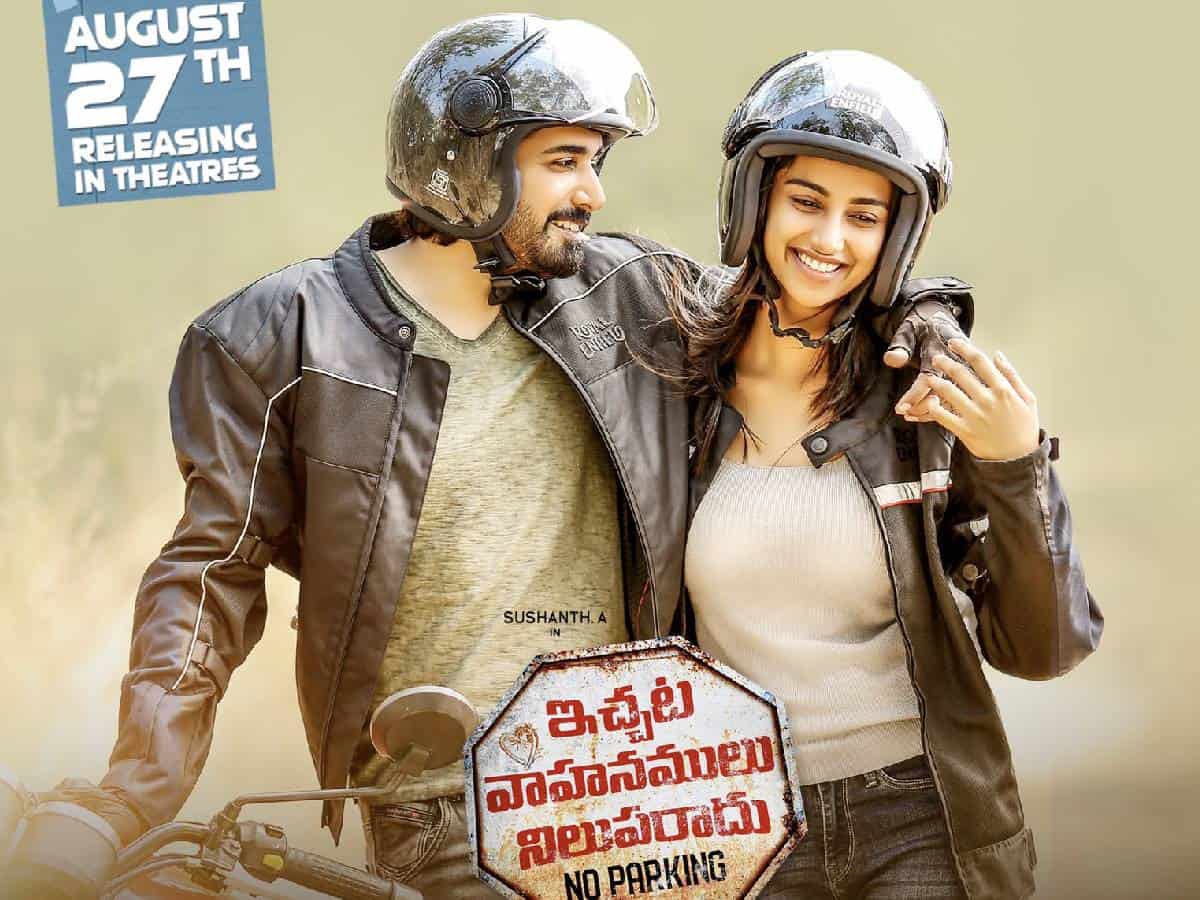 After doing a character role in Ala Vaikunthapurramuloo, Sushant is back to his solo project that has been titled as Ichata Vahanumulu Nilupa Radu. Will Sushant make use of his AVPL charm? Has he made a wise choice this time around?

Arun (Sushanth) is a happy-go-lucky guy and mommy’s son. He works at an architecture company where he falls for intern Meenakshi (Meenakshi Chaudhary), sister of local politician and rowdy Narsimha Yadav (Venkat). When her brother is out of town, Meenakshi agrees to meet Arun near her house. But Arun plans to surprise Meenakshi and comes straight to her house. Mistakenly, he visits the neighbour’s house where a major crime takes place. The society people feel the criminal is still inside the society and closes all the exits to catch him. Arun is in big trouble as he is mistaken as the culprit. How does Arun come out of all this mess? Who was behind all this? Will he win Meenakshi?

Sushanth doesn’t shine in this soft role. He looks weak. Meenakshi looks good. But her dubbing is a mismatch. Venkat makes a comeback after longtime. He gets a role that asks for more. Vennela Kishore gives slight relief in this weak comedy. Harish Koyalagundla is alright as ‘Matter’. Priyadarshi as Puli has an important role in the story but sadly he gets sidelined. He has very limited screen presence despite having significance in the story. Abhinav is good as Venkat’s sidekick. Ravi Varma plays the negative role Bhushan. The role lacks the strength and effect it needs. Krishna Chaitanya is seen as a crooked police inspector Rudra. Sunil’s cameo is good.

Technicalities
First time director Darshan has failed to come up with a gripping story. He chose a wafer-thin plot and underdeveloped it. The result is a mediocre film. Screenplay is flat. Dialogues are just passable and nothing much to home. Praveen Lakkaraju’s music is okay. But the songs don’t gel with the visuals. And the placement of the songs isn’t convincing. Background score is loud and noisy.

Plus Points
Tense Moments In Second Half

The very beginning of the film is what puts us off. The story begins at a bike showroom. It is disconnecting and artificial. The hero and heroine’s love story is not convincing. One doesn’t care for the duo’s love. Even the rivalry between Narsimha Yadav and Bhushan is not effective. The friendship between Arun and Puli deserves better scenes to establish their bond. All these are half etched leaving the audience disengaging. The crucial point in the film is a series of serious crimes taking place in Snehapuri colony. There is not much attention on this and there is no police/media focus on this issue. Until and unless, the society people decide to take law into their hands following an incident in broad-daylight.

The real conflict of the film begins only at the interval portion. While the initial second half builds some tense moments. Yet it goes wasted as the film proceeds further. Some moments in the second half are saving grace for the film. There is a particular scene in the film where Abhinav (who hates love) catches love birds Arun and Meenakshi. However, he is easily convinced by Meenakshi and Arun. And the wicked police inspector’s over action is tolerated. The pre-climax and climax portions turn predictable and the film becomes tad boring. The title too doesn’t justify the crux of the story and its conflict. Overall, Ichata Vahanamulu Nilupa Radu ends up as a boring watch.