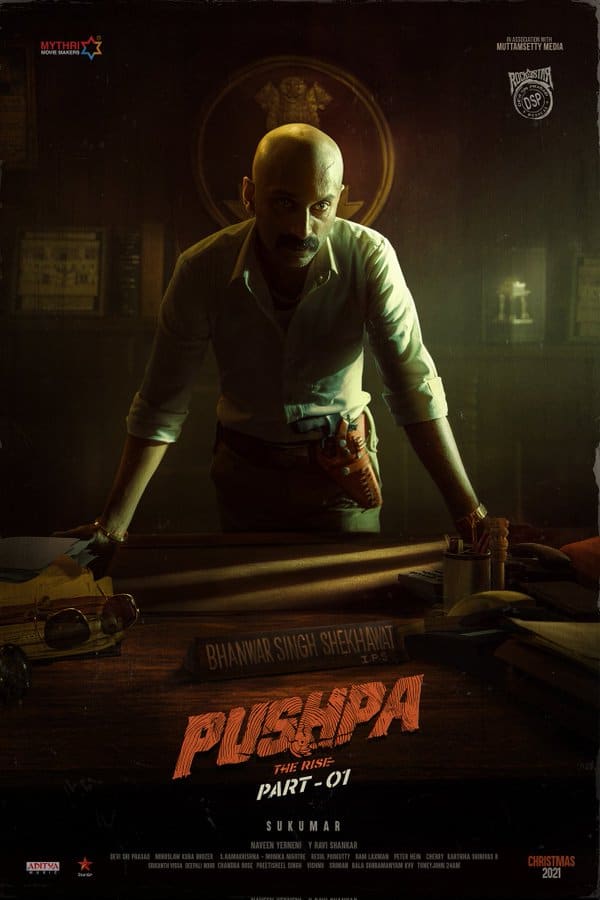 Malayalam talented actor Fahadh Faasil is debuting in Telugu with Icon Star Allu Arjun’s ‘Pushpa.’ The team of ‘Pushpa’ unveiled the first look of Fahadh and he is just menacing.

Spotting a bald look, Fahadh is essaying the role of Bhanwar Singh Shekhawat who is an IPS officer. As ‘Pushpa’ is based on Red Sanders smuggling, Fahadh will be on the hunt for smugglers. This means it’s Pushpa Raj versus Bhanwar Singh and this really sounds exciting.

For sure the silver screen will light up with Allu Arjun and Fahadh clashing. “Meet the #VillainOfPushpa. The most talented #FahadhFaasil turns into menacing BHANWAR SINGH SHEKHAWAT (IPS) to lock horns with our #PushpaRaj,” tweeted Mythri with the poster.

A directorial of Sukumar, ‘Pushpa’ is being made on pan-India scale and in two parts. First part titled ‘Pushpa The Rise’ will be hitting the box office on December 25th.

With decent response to the first song, the team of ‘Pushpa’ will shortly come up with the second song announcement. It’s a DSP musical.