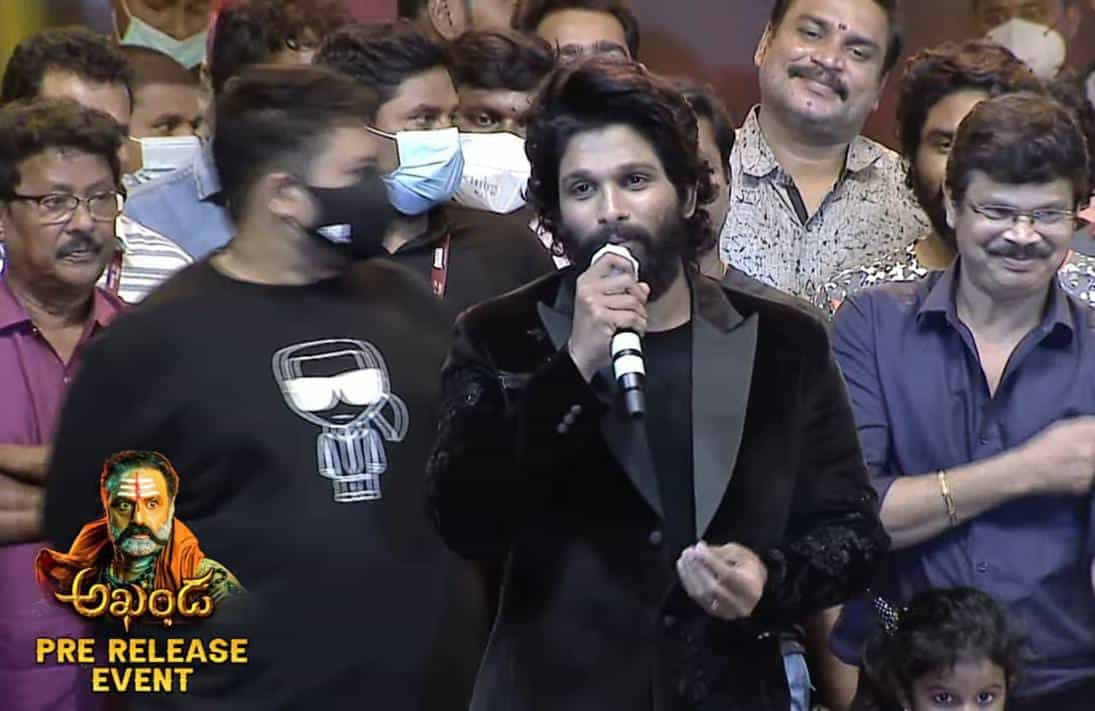 Icon star Allu Arjun graced the pre-release event of Akhanda as the chief guest. Balakrishna played the lead role in the film and it is his third outing with director Boyapati Srinu. Allu Arjun also congratulated the entire film’s cast and crew. He mentioned each and everyone’s name and conveyed his best wishes to them. Akhanda is hitting the screens on 2nd December 2021.

“Balakrishna garu is like a father figure to me and I feel elated to be here as a chief guest. Another reason to be happy about my presence today is Boyapati Srinu garu. I know him even before he made his first film. I am happy to see his growth from a director to a star director. I know Boyapati garu likes me a lot and he considers my growth as his growth and I consider his growth as mine.

“From Simha to the current Akhanda, the combination of Balakrishna and Boyapati Srinu is unstoppable. The addiction Balakrishna garu has towards cinema and his diction as an actor made him what he is today. Balakrishna garu can deliver the dialogues of n number of pages with the same intensity. I like it in him a lot and he makes dialogue delivery look so easy. After Sr NTR, it is only Balakrishna garu who can deliver dialogues with perfect diction and there is no exaggeration about it.”

“The best quality I like about Balakrishna garu is being himself. He is so real and he is the same on the screen and off the screen,” said Allu Arjun and shared a personal incident. “I attended a function 12 years ago which was attended by Balayya Babu garu too. After going back home, I was wondering how he can be so simple and happy without getting bothered by anything. It is the reason today that he bagged a huge fan base,” said Bunny.

“Everyone wants cinema to win. After the second lockdown, Akhanda is the first big film releasing in Telugu. Along with everyone, I whole-heartedly wish that Akhanda will become a big hit. Following Akhanda’s success, I hope audiences will encourage my film Pushpa. Following Pushpa’s success, I hope everyone will encourage RRR and all the other films that hit the screens,” revealed Allu Arjun.