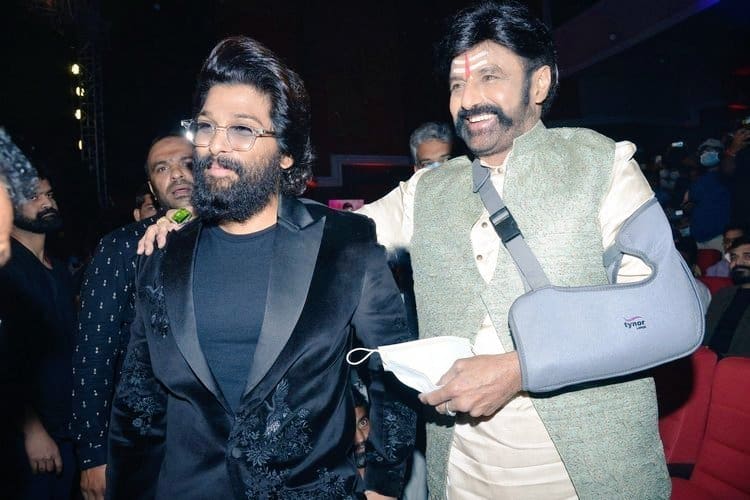 Nandamuri Balakrishna and Boyapati Srinu combination is unstoppable. After the success of Simha and Legend, the duo is gearing up for their third outing Akhanda. The film is hitting the screens on 2nd December. The film unit held the pre-release event today and it was attended by Rajamouli and Allu Arjun as the chief guests.

“I thank my brother, ICON hero, and Chocolate Boy Allu Arjun for coming here. I shared the relationship of my family with his family in my talk show Unstoppable. I am happy to have him here at my event,” said Balakrishna about Allu Arjun. Balayya also extended his thanks to sensational filmmaker Rajamouli for gracing the occasion.

Balakrishna funnily commented that he wants to launch a devotional TV channel. “Just like how I started anchoring, I also want to launch a TV channel like Bhakti channel,” said Balakrishna by chanting some Sanskrit Slokas in his usual style.

Balakrishna also thanked the fans for their continuous support in his speech. He also appreciated the film’s cast and crew for being a part of the project.

Talking about the film Akhanda, “I hope Lord Siva’s blessings are with our movie. I am happy to keep devotion alive with our film Akhanda.”

“After almost a year, we are releasing Akhanda on 2nd December. Pushpa is releasing on 17th December. “Alage mana Ram Charan thammudu and Mana Jr NTR Natisthunna RRR cinema vidudhala avuthundhi“, said Balayya. Chiranjeevi garu’s Acharya is releasing too. I request the governments of both the Telugu states to extend support to all these films,” Balakrishna said.

Balakrishna also gave a special mention to Thaman for coming up with extraordinary re-recording for the movie.

Pragya Jaiswal, Poorna, Jagapathi Babu, Srikanth and others are a part of the film. Thaman is the film’s music director. Miriyala Ravinder Reddy is the film’s producer.