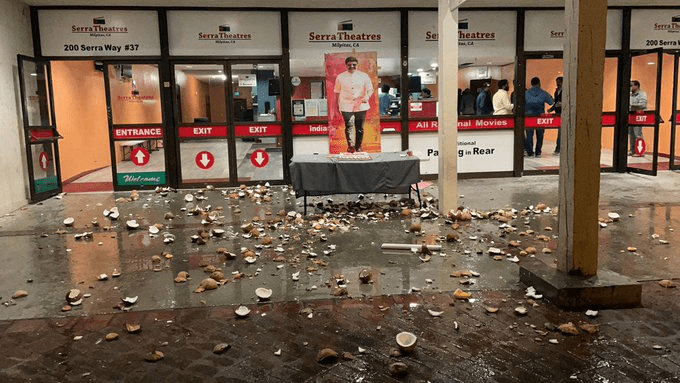 Generally, we see a festive atmosphere at theatres in the Telugu states whenever a big hero’s film is hitting the screens. Fans erect cut-outs, do palabhisekham, crack coconuts in front of posters, and also perform pooja to their favorite actors.

But that is not the case in western countries. Even if a Telugu or Tamil film hits the screens there, we don’t see fans doing all this crazy stuff at those theatres. But one such incident happened in the United States of America last night.

Nandamuri Balakrishna’s fans have cut a cake in front of his poster at Serra Theatres in California and cracked a lot of coconuts as well, ahead of the actor’s new film Akhanda’s premiere. This photo is now going viral all over social media.

Generally, we experience this kind of euphoria in the local theatres but it looks like our Telugu audiences have carried it to the USA as well.

The film had released today and is getting a positive talk from the audiences.