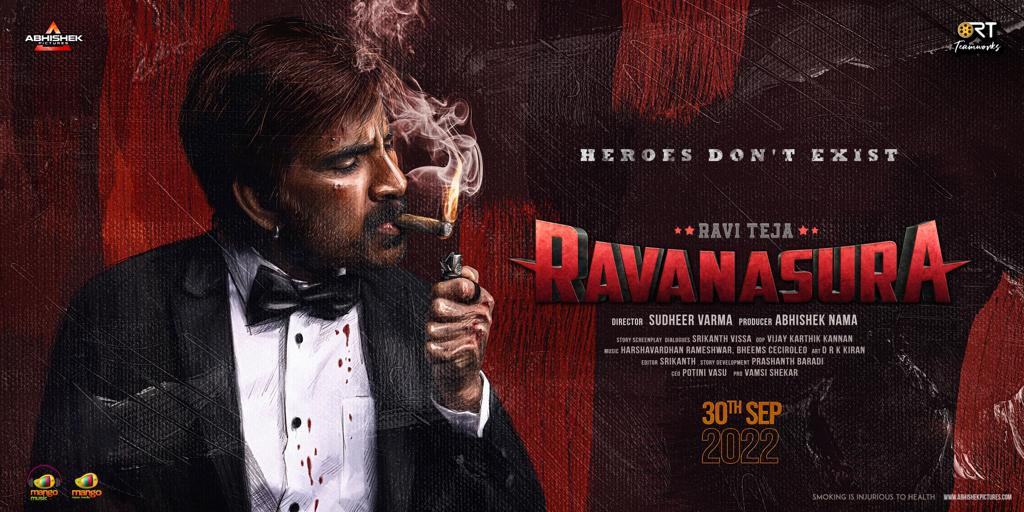 Mass Maharaja Ravi Teja has been hectic busy with multiple projects and guess what he will have a total of three releases this year. While Khiladi is coming next month, Ramarao On Duty will arrive in summer. Now, the makers of Ravanasura locked its release date.

Directed by Sudheer Varma and produced by Abhishek Nama under Abhishek Pictures, Ravanasura will hit the screens on September 30th. Ravi Teja looks intense in the announcement poster, as he smokes a cigar. His getup here is unusual and we can observe blood marks all over. This shows the intensity of the character.

Ravanasura’s grand opening event has been held today, on the occasion of Sankranthi. Megastar Chiranjeevi has graced the event as a chief guest. K Raghavendra Rao handed over the film’s script to the team. While Talasani Srinivas Yadav switched on the camera, Megastar clapped for the first shot.

Anu Emmanuel, Megha Akash, Faria Abdullah, Daksha Nagarkar and Poojitha Ponnada will be playing the heroines and every character is said to have their own significance. Sushanth will be seen in a crucial role and his first look was unveiled recently. Ravanasura will go onto the floors soon