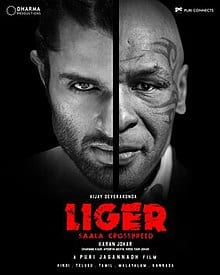 Vijay Deverakonda’s Bollywood debut Liger has just wrapped up its shoot. So far only a few posters and one glimpse from the film is out. Bollywood reports indicate that the film’s all-language digital rights have fetched a staggering Rs 60 Crore.

Amazon Prime is said to have acquired the PAN India digital rights of Liger.This is excluding the theatrical rights of the film.

Besides Vijay Deverakonda and Ananya Panday, the film features Boxing legend Mike Tyson in a crucial role. Liger is an out-and-out hero-centric film with martial arts as the main theme. Ace Bollywood producer Karan Johar is bankrolling this crazy project.

After Liger, Vijay has yet again teamed up with Puri Jagannadh for Jana Gana Mana. The shoot of Jana Gana Mana is expected to start this month in the USA. Vijay is said to be extremely happy with Liger which made him collaborate with Puri yet again. Looks like there is no stopping for Vijay. However, it all depends on Liger’s success at the BO.