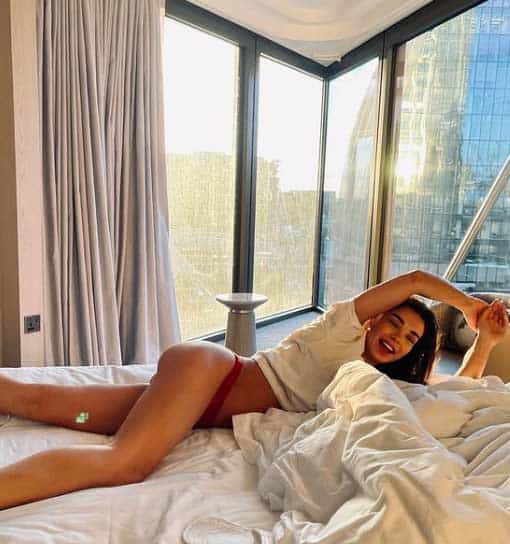 After a long time, the yummy mummy Amy Jackson left her fans drooling over her hottest pictures again. The Indian-British actress is currently enjoying her time in London and she shared a few latest photos from her stay.

The actress is seen enjoying a breathtaking view from her apartment in London. And fans are in awe after she sported only a white tee. Surely, her pictures are taking the internet by storm. The series of pictures show Amy posing on bed and then at her spectacular balcony.

She can also be seen sporting leather black pants with a sweatshirt as she enjoys bowling. Captioning the photo, she wrote, “A lil bitta this a lil bitta that on the East Side.” She gave a glimpse of her delicious coffee and the high-rise building that she is staying in. And just like that, she once again managed to turn enough heads with her photos on social media.

Meanwhile, talking about her personal life, Amy is absolutely cherishing her motherhood. But all’s not well between her, and fiancé, George Panayiotou. Reports come in that the duo are not living together for a year now. Amy has also deleted most of her photos with George.