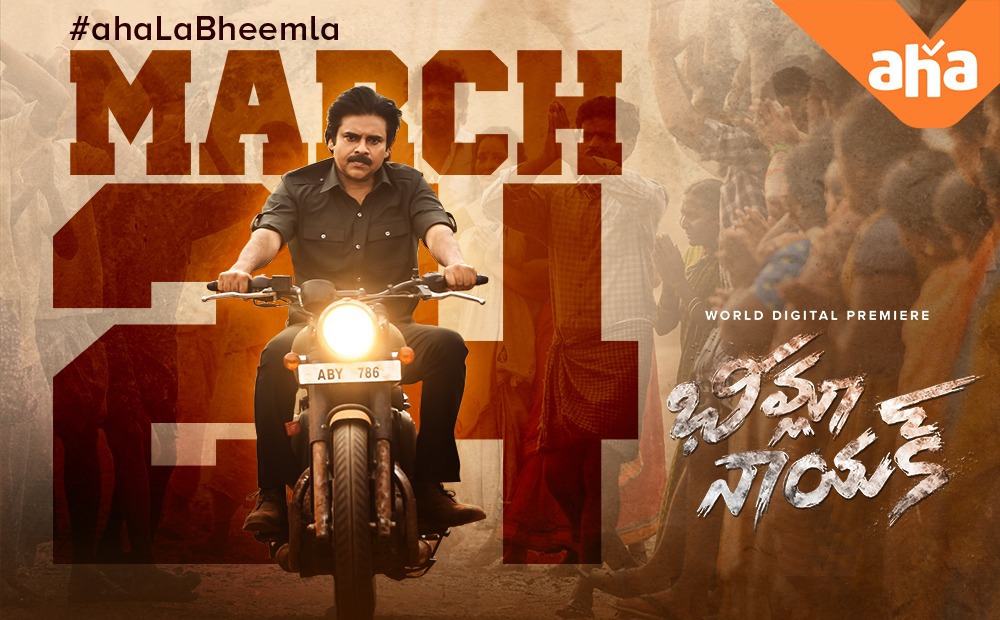 Aha to premiere Bheemla Nayak one day early on 24th March. Announces a contest to win Pavan Kalyan’s bike from the film.

Also, recently aha has announced an exclusive contest to win the bike that Pavan Kalyan has used in the film. S Thaman in a recent video launched by aha announced that anyone who subscribes to aha’s annual subscription from now onwards until 1st April 2022 will get a chance to win the Bheemla Nayak’s bike from the film.

Bheemla Nayak is a fight between ego and self esteem. The film revolves around Bheemla Nayak ie., Pavan Kalyan who plays a a sub inspector and Danial Shekar played by Rana Dagguptati, an ex Hawaldar. Dany is caught red-handed by the police and excise department for carrying liquor in a prohibited zone.

While Danny tries to escape the charges using his money and influence, Bheemla Nayak (Pawan Kalyan) the efficient police officer who is well known for his strong morals and values, registers a case and arrests. This incident snowballs into a battle of egos between Danny and Bheemla, as a result the never-ending rivalry between them.

There are also strong women characters in the film played by Nitya Menen and Samyuktha Menon, as the wives of Bheemla Nayak and Daniel Shekar respectively. The film has some of the most successful audio tracks of the season and fantastic BGM by Thaman.

Mark your calendars to witness the battle between ego and self respect with Bheemla Nayak, only on aha from March 24.