F3 Is Much Bigger Entertainer Than F2: Venkatesh 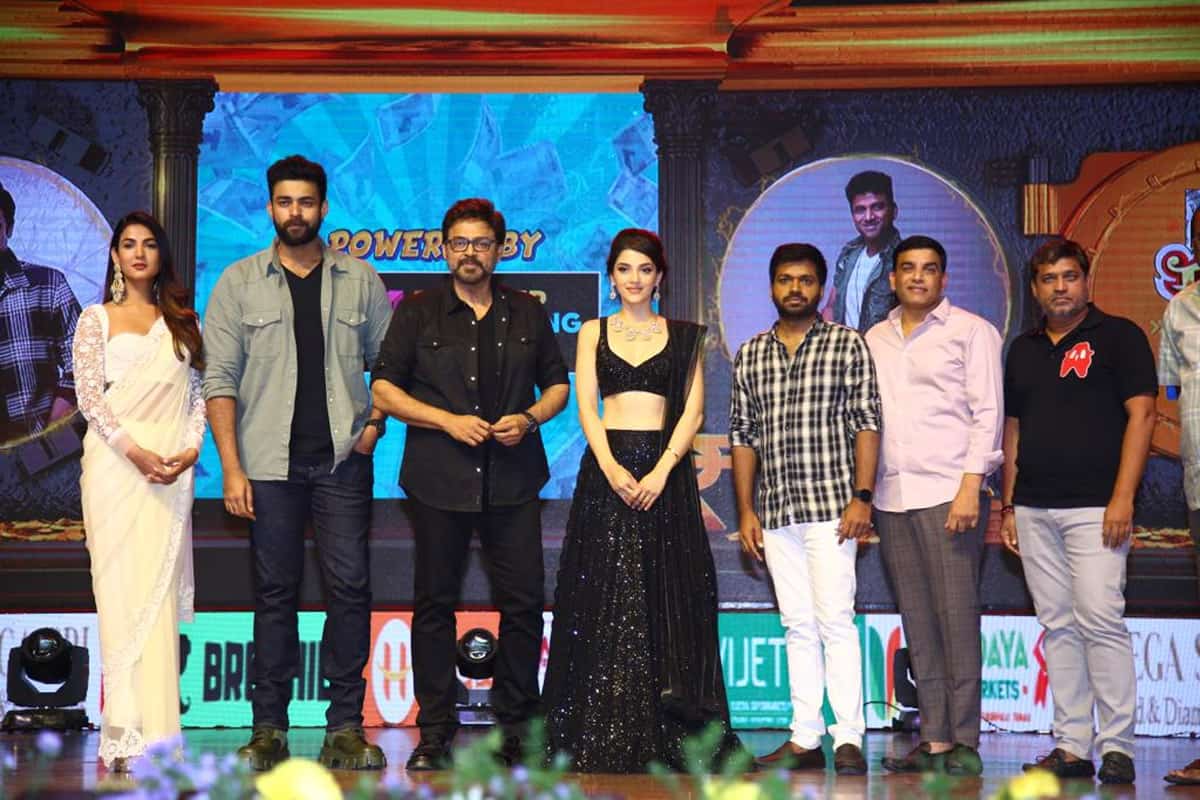 This summer is going to end on ‘fun’tastic note with Venkatesh and Varun Tej starrer F3 releasing in theatres on 27th of this month. The biggest fun franchise directed by Anil Ravipudi under Sri Venkateswara Creations is making enough noise ahead of the release and the team celebrated ‘Fun’tastic event with crowd coming in huge numbers.

Dil Raju said, “Anil Ravipudi made F3 as a wholesome entertainer. More than logics, this movie will work because of enough laughs. Venkatesh and Varun Tej’s chemistry in the movie is wonderful. Censor officials told after watching the movie that F3 is a full meal treat for audience. It’s 13th film for DSP under our banner. You’ll enjoy F3 more than F2.”

Anil Ravipudi said, “Pandemic gave two years of break for everyone. We started story writing in 2020 March. The film is coming finally on May 27th. We all struggled and worked hard for the movie. F2 is the biggest enemy for us. You all enjoyed F2 a lot. As to meet the expectations, we put in extra efforts for F3 from script stages. Laughing is easy, but making someone laugh or creating comedy is not easy thing. So, I thank all my actors will make all of you laugh in theatres.

Varun Tej is like my brother. The trailer might have given an idea about his characterization in the movie. He will surprise you with his comedy timing and mannerisms. This will bring good name to Varun as an actor. I wish he will continue to do these kinds of movies. Venkatesh is my all-time favourite. He gives energy to actors on sets. He is a star hero, but he performs like a child, when doing comedy scenes. We went through tough times during covid. Come to theatres and you won’t be disappointed.”

Varun Tej said, “Two summers are already over and we’re finally coming. It’s been long since an out and out comedy film came. The movie has come out well. DSP provided chartbuster album and gave superb BGM. This is my third movie under Dil Raju’s production. I hope, this will be hat-trick film in our combination. A big hug to Anil. I haven’t ever seen such a positive person. There is no better director in this generation who can make better comedy movies than Anil.

My co-brother Venkatesh acted in several multi-starrers. But I’m fortunate to work for two movies with him. This journey is very close to my heart. This journey was happier because of Anil and Venkatesh. Go watch the movie with family and audience of every age group will enjoy it. Let’s talk in success meet.”

Venkatesh said, “I’m feeling really happy because my film was released in theatres 3 years ago. My last two films went OTT way because of the pandemic. We’re going to release F3 in theatres and it’s a big thing for me. My fans missed my movies in theatres. But F3 will please them for sure.

This film will also please all my family audience who has shown love and affection over the years. Anil came up with a brilliant script. The environment on sets was so positive. Varun is brilliant in the movie. I thank all other co-stars in the movie very much. F3 is coming on 27th. F3 is much bigger entertainer than F2.”