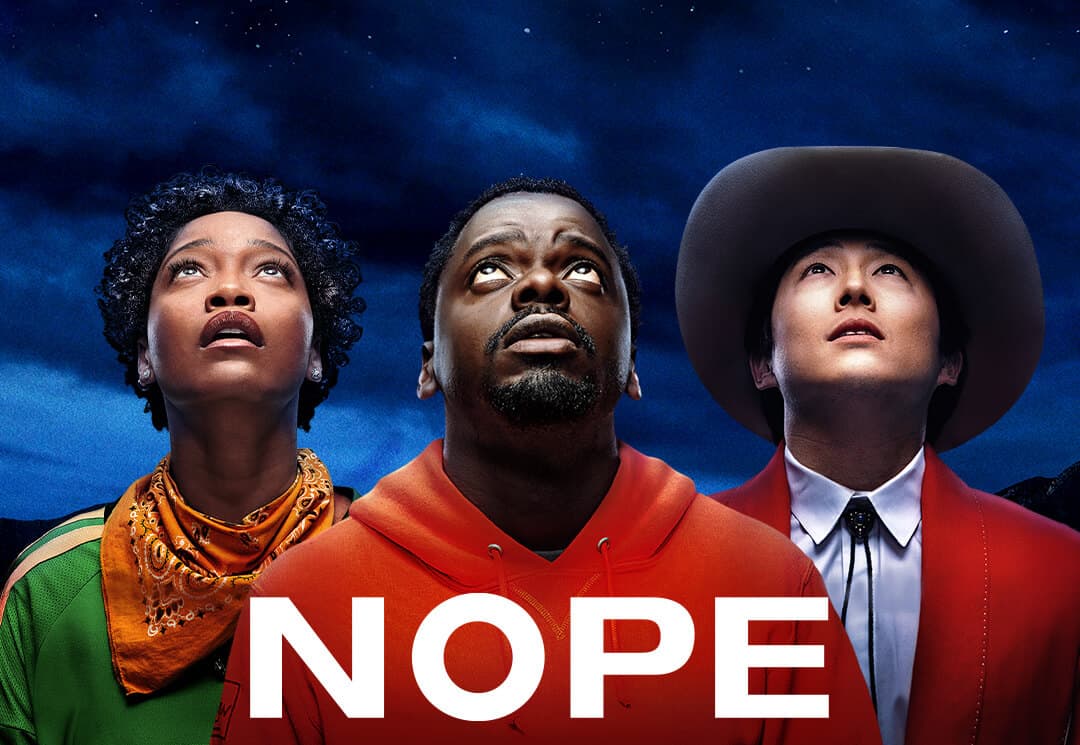 Jordan Peele is a new horror sensation who created his own brand in the genre of “Horror” in Hollywood cinema with the most astonishing works namely: ‘Get Out’ and ‘Us’, his latest work ‘Nope’ was recently released to theatres, let’s see whether the movie able to complete a hattrick for Peele or not.

The story begins in a remote Village where a Family owns a Horse Farm, from generations they used to give Horses for Hollywood Film productions, the owner of the farm dies through the mysterious fall of nickel and other metal waste from the sky onto his body, after a while the owner’s son Oj Haywood ( Daniel Kaluyya) and daughter Emerald (Keke Palmer) start to handle the horses business in Hollywood which didn’t go as they expected, one day OJ sees a UFO-like creature in the sky when one of the horses from the Farm starts behaving abnormally, what is that creature? Will OJ and Emerald (“Em”) be able to survive against that? Forms the rest of the story.

‘Nope’ is another fine piece of work in the oeuvre of Peele, this time he came with horror that mixed up with Adventure/Sci-fi elements, and the blend was neat, the horror part of it left us gasping, and the adventure/sci-fi part of it hooked us with the compelling narrative. Like Peele’s previous works even this movie had a Social commentary underlying the drama, and it reveals its nature more and more with the repeats, ‘Nope’ movie is largely allegorical, it reflects our obsession with the spectacles, how we are so unavoidably “Look towards the spectacle”, this has been complemented with the rather complex drama involving an out of the earth Creature, this complexity is what reduces the wide reach of ‘Nope’, as it’s difficult to comprehend at times for some, Peele’s earlier works ain’t been this intricate, so despite having the thrilling moments and enjoyable adventurous episodes, the subtexts of the ‘Nope doesn’t really connect that strongly to all, thereby its brilliance gets restricted to only certain “Niche” audience.

Performances of Daniel Kaluyya and Keke Palmer were quite fantastic, especially of Daniel, his face evokes this helplessness so well that without being that expressive his eyes reveal the emotion he is undergoing so revealingly, his character needed the restricted performance and he nailed it with utmost perfection especially in the climax or at the interval part, we will be compelled by this man’s stunning act. Peele made sure to write another amazing character called ‘OJ’ to Daniel after their ‘Get out.

On the Technical front, ‘Nope’ is an absolute craft beast, Just like his previous works, Peele’s skillful command of various crafts is clearly visible. The cinematography by Hoyte van Hotema has been tremendous, the atmosphere of the movie sucks you completely thanks to his craftsmanship that helped to capture the visuals so terrifically. The musical score by Michael Abels is mesmerizing, it’s haunting at the same time energizing. The editing by Nicholas Monsour is remarkable, there is a sick cut at the shot of “An ape killing a person”, it cuts so sharply, that its horror impact will linger on your mind for a longer time.

Complexity of the drama

Bottom-line: Overall, ‘Nope’ is a unique sci-fi/adventurous horror that has many exciting moments to behold, despite the complexities, it’s thoroughly enjoyable. Don’t miss this peculiar “Spectacle”.