Vijay’s Is A Rocket Journey, Mine Is A Train Journey: Sivakarthikeyan 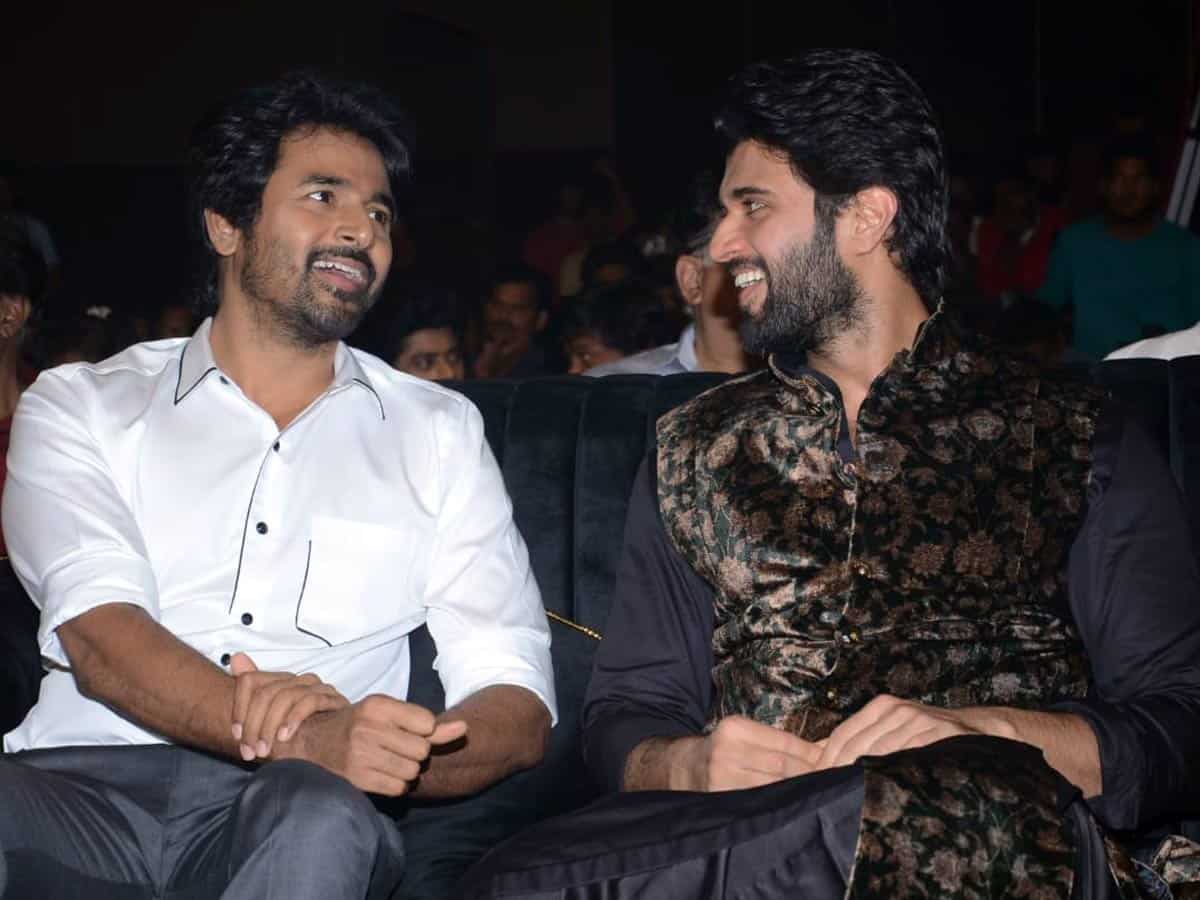 Sivakarthikeyan’s latest outing Prince helmed by Anudeep KV is set for release on October 21st. Meanwhile, the team organized the film’s pre-release event which was graced by Vijay Deverakonda and Harish Shankar as special guests.

Producer Jahnvi Narang thanked guests Vijay Deverakonda and Harish Shankar for gracing the occasion. She heaped praises on Sivakarthikeyan saying, ‘He’s one the most humble and kind-hearted people, I’ve ever come across.’

Harish Shankar said, ‘I don’t know Anudeep’s qualification, but it seems he well understood the mentalities of the middle class like Bapu- Ramana who used to generate fun through middle-class characters. I met Vijay once, and there are many stories on websites. I’ve seen several movies of Sivakarthikeyan in cinemas. I’m going to watch FDFS of Prince.’

Vijay Deverakonda said, ‘Suresh Productions and Asian Cinemas played a very big role in my journey to where I’m standing today with Pelli Choopulu and Arjun Reddy respectively. Nag Ashwin used to talk a lot about Anudeep, while we were doing Yevade Subrahmanyam. I watch Anudeep’s videos, whenever I feel stressed.

I’m looking forward to work with Harish, Thaman, and Manoj Paramahamsa. I didn’t meet Sivakarthikeyan before. I’m meeting him for the first time. I, however, like his journey. After college, he was 5 years TV, then Dhanush’s movie character role. He’s a star, producer, and lyricist. I felt sad when I saw him weeping on the stage, during an event. I could understand his pain. I wanted to lend him my support, whenever he needed it.’

Sivakarthikeyan said, ‘Vijay Deverakonda is one of the smartest heroes in Indian cinema. That’s why girls go mad about him. I love his Geetha Govindam. I saw it many times. He’s a sweet person. I’ve been in the cinema industry for 10 years. It’s a slow journey, like a typical train journey. However, Vijay’s is like a rocket journey. It went straight up. He became a Pan India star in such a short span, which is not a joke. Vijay is looking like a Prince today. I wish to do a movie with Vijay. I wish Harish will make it happen. I hope, Kushi will be a blockbuster.

Prince is a trademark Anudeep entertainer. His humor doesn’t hurt anyone. He always is very jovial. He makes a strong influence on others. He discussed a very interesting and important topic. It also has a very good message, other than great laughs. The film is about an Indian boy falling in love with a British girl. Go, watch it in theatres and you’ll love it. Telugu audiences are giving love for heroes of all industries.’