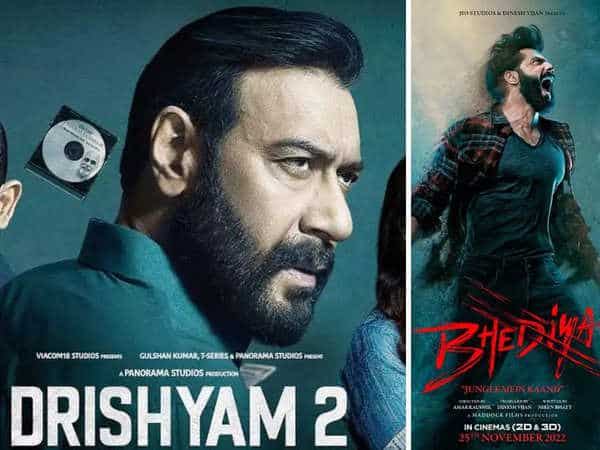 After a long time, the Bollywood box office has seen some interesting films on the silver screen, but then, senior hero Ajay Devgan is literally shaking up the box office with his perfect grip with “Drishyam 2”, while young spicy stars Varun Dhawan and Kriti Sanon are unable to make it big with “Bhediya” though they have promoted the film a lot. Here is what the box office numbers are saying.

In its second week of release, Drishyam 2 pocketed a whopping ₹14+ crores nett last Saturday and ₹17+ crores nett on Sunday, thus taking the total collection of the film to ₹143+ crores nett from the Bollywood box office.

Considering the fact that the film has no commercial elements, superhit songs and only a riveting narrative, it’s a stupendous success if we have to say. And it looks like Ajay Devgan will be scoring double century easily before other biggies like Avatar 2 arrive in December.

Coming to Varun and Kriti’s Bhediya, the film that was released last Friday posted better numbers on Sunday but the total first weekend total is just ₹28+ crores nett, while other young heroes like Karthik Aryan scored the first weekend of ₹55+ croers nett with Bhool Bhulaiya 2, the big hit of Bollywood this year. Compared to that Bhediya has tumbled a bit and standing strong on weekdays is essential now.