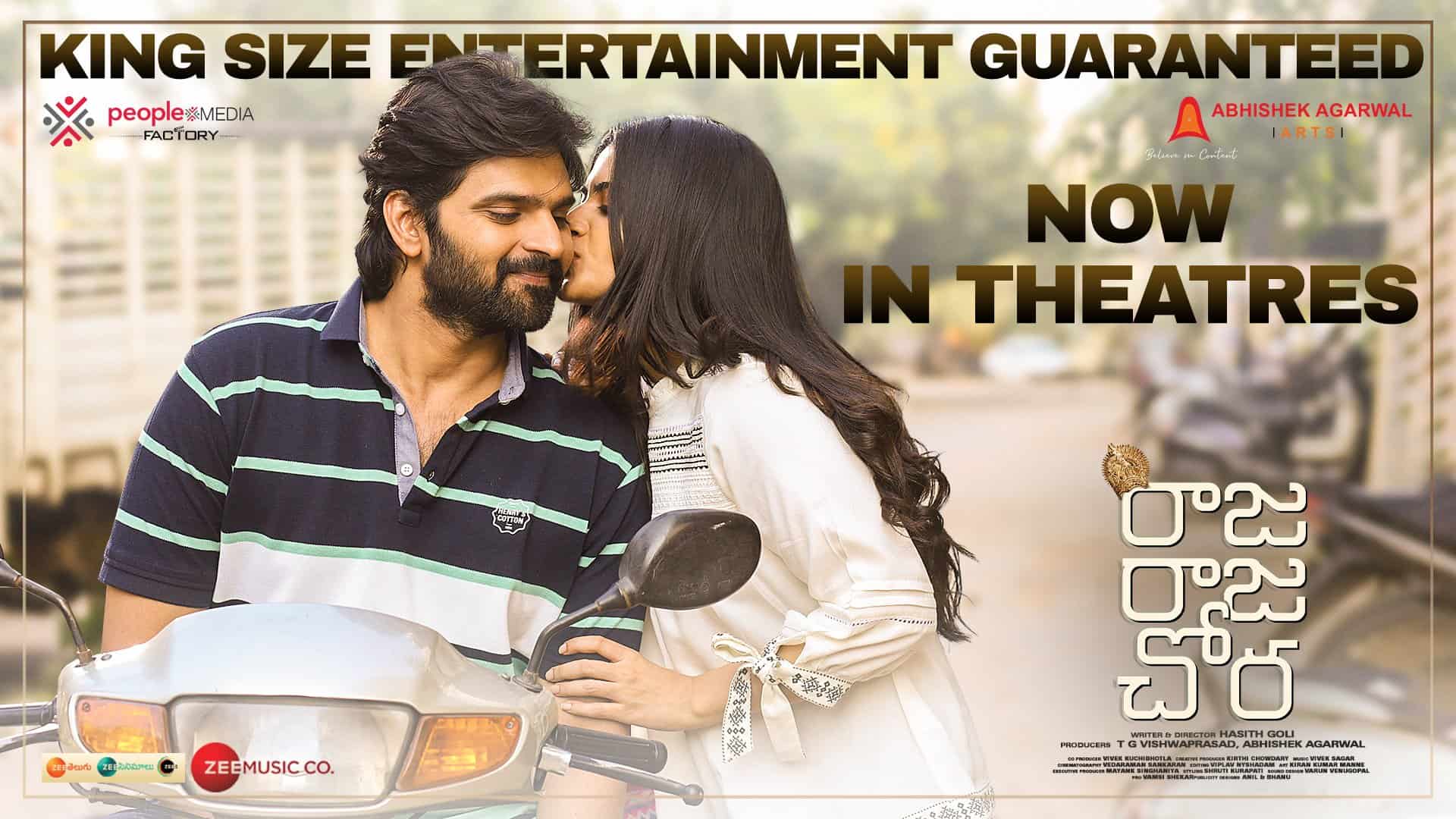 Sree Vishnu’s last outing Thippara Meesam had his role with negative shades. It didn’t work. He has yet again come up with a role full of negative shade involving burglary and illegal affair. But Raja Raja Chora turns out to be a totally different one from the past one. Will he succeed this time? Is he second-time lucky? Check out.

Bhaskar (Sree Vishnu), who originally works as a helper in a Xerox shop, claims to be a software engineer and maintains a relationship with software engineer Sanjana (Megha Akash). To live upto these lies and maintenance of his software girlfriend, Bhaskar is a part-time thief who makes quick bucks by burglary. Sanjana’s maternal uncle William Reddy (Ravi Babu) is a crooked police inspector. The twist is that Bhaskar is already married to Vidya (Sunaina) and he has a son. Vidya is studying her law. How does Bhaskar manage all this? What are the hurdles that he faces? How does Bhaskar deal with William?

Sree Vishnu shines in a brilliantly written negative role that transforms over the progress of the film. He breathes life into the role of Bhaskar. The way he acts innocent and the ease with which he tells lies is a treat to watch. He is a perfect choice for the role as he shoulders the film throughout. Sunaina as Vidya delivers a fine performance. Subtle emotions and her pain as a struggling wife is well captured. Megha Akash does complete justice to her role. As a modern girl Sanjana with ambitions and dreams, she pulled off well. Her relationship with Bhaskar has twists and yet she holds it. In the end, she follows her passion. Ravi Babu has got the best role in recent times. William Reddy is a role that is not forgotten easily. Thanikella Bharani as a spiritual preacher impresses. His role takes the story forward. Every character in the film has a connection with the story and at the end, all of them have been rounded off well.

Newcomer Hasith Goli has mesmerised with impressive writing that is beautifully shown on the screen without any deviations. He dealt with the whole film with a lot of maturity like an experienced make and never in the film he appears to be a debutante director. He got the right cast and managed to get the best out of them. Attention to detailing and flawless narration works well. The screenplay work deserves special mention. Dialogues are thought-provoking. However, there are few misses. The lag at portions isn’t good. Climax could have been handled better. Vivek Sagar’s music and background score comes in handy. He has yet again done his best. Editing is crisp and the film doesn’t have any unwanted scenes or forced sequences. Production values are good. Kudos to the technical team.

Hero character with negative shades isn’t likeable to all. It is a challenge for the director to make a negative character and make the audience love it. First-time director Hasith Goli succeeded in this challenge as the role of Bhaskar is loved by audiences throughout and there is a sympathy on the character. Ajay Ghosh’s character says, “You never stole money in my shop. You have never cheated me.” This sums up the hero’s true character and the mistakes he made in life are due to the situations surrounding him.

Raja Raja Chora has got almost everything right. It is a perfect blend of entertainment and emotion. The first half relies on the fun factor which is packed with the hilarious scenes. Sree Vishnu stuns with his show. He makes us laugh at first and cry at the end. His progress and transformation is what makes the film. It is loosely inspired by the story of Valmiki who started as a thief and later transformed into a celebrated poet and pens down epic Ramayana. Vishnu here is the modern Valmiki with cinematic liberties.

The film has several layers. The equation and bond of husband-wife is shown well. It tugs one’s heartstrings towards the end. The father-son love bond is moving. The relation between Bhaskar and Sanjana is also portrayed well. How an employer and employee stand by each other. Ajay Ghosh’s dialogue on the original and xerox copy is a winner. There is a dialogue in the police station where Vidya (Sunaina) tells William (Ravi Babu) that no matter what a wife always supports husband when it comes to the peak. All these are the best moments that you take back home from the film.

Sree Vishnu and Gangavva episode is also good. Sree Vishnu’s english, his love for vocabulary with words such as jeopardise generate ample dose in the beginning scenes. The way he positions himself as a software engineer is hilarious. Ravi Babu’s character is hilarious but also villainy. How the protagonist gives it back to Ravi Babu is a must-watch. The first half has its moments laced with fun. Twists are good. Suspense about Megha Akash is maintained well. The interval block stands out. The second half is bogged down by some sloppy portions. The emotions run high. There is a scene where Bhaskar’s money is stolen from his house. Who did it or who was behind it isn’t shown. It is an open loop in the movie. Also towards the end, the director rushes to climax.

Barring the above shortcomings, the best part of the film is that the story never takes a back seat. All the dots in the story are connected well. On the whole, Raja Raja Chora is a well-packaged film with humour and emotion in equal quantities. The film has its heart in the right place and the funny bone too.