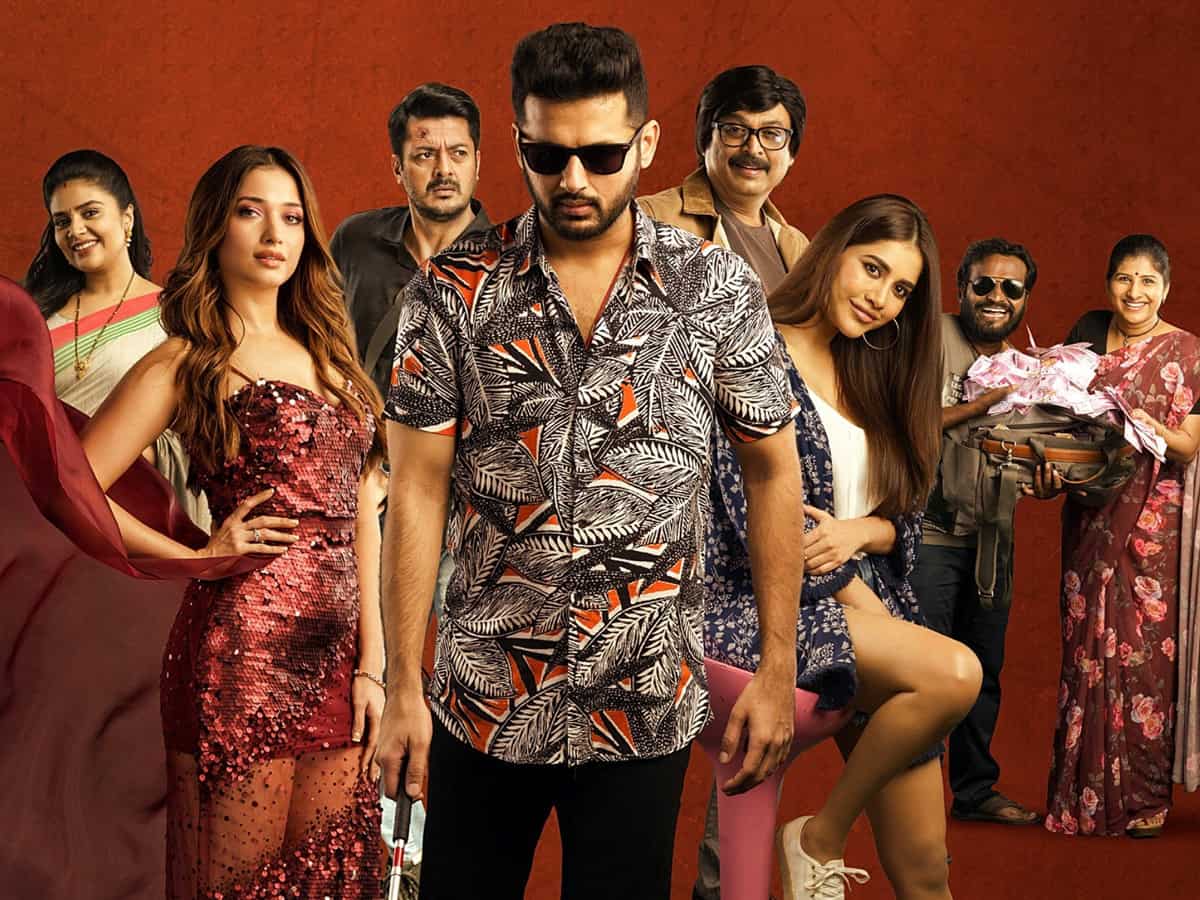 Nithiin’s Maestro is an official remake of Bollywood’s successful crime thriller Andhadhun, made by the this genre specialist Sriram Raghavan. Director Merlapaka Gandhi directed the Telugu version with Nithiin, while the whole team managed to convey us strongly that they are completely going by the original as they did not want to take the blame if the changes spoil the movie, if they made any. Maestro made its way to audience with OTT release and let us see how the movie is.

A pianist Arun (Nithiin) appears to be blind for his own reasons. He meets Sophie (Nabha Natesh), who is a restaurateur and gets to work at her restaurant as a pianist. A regular visitor at the place, Veteran actor Mohan (Naresh) gets impressed by Arun’s music and asks him for a private concert for himself and his wife Simran (Tamannah) at his house. Arun obliges but sees a murder at the place and one more similar incident gets him tangled completely in that tricky mystery. While his struggles to come out of it reach the peaks, he turns blind, this time for real. How he overcomes all this and how he had to survive amid many twists forms the story.

Nithiin looked stylish and very good as a blind person. Though he has got the reference on how to do it from the original, Nithiin has done it with an ease and balance. His maturity in acting is visible.

Tamannah is good in the role of a femme fatale, but her Telugu accent and expressions in some scenes appear like a mismatch. She tried good for the role but was not able to match it up to Tabu’s performance and also the oomph.

Nabha Natesh is okay in the role of Arun’s love interest. She looked alright. Jishhnu Sen Gupta, Sreemukhi, Naresh and Harshavardhan are apt and they did well in their respective roles. Singer Mangli acted well in the role of lottery tickets’ seller and she acted like a seasoned actor. Her Telangana accent is a plus point for her role. Though it is a remake, the choice of actors to replace that cast from the original, is perfect.

Maestro’s technical values are high. The movie is colorful and beautiful in all the frames. From costumes to colors, Maestro is impressive. Songs are just fine, but the background music is good and keeps the flow going. There are many songs in the original and most of them are chartbusters.

Being a remake, Maestro is sure to draw comparisons from the original movie. The makers must have decided to remake it frame by frame and they did it mostly. From the backdrop of Goa to the similar locations that were used in the original and certain frames to many dialogues, Maestro is a frame to frame and word to word remake.

When the plot is same, the next stop of comparison would be at star cast in which Maestro did all well and came out spotless.

Slowdown in second half
Songs

Maestro is a movie with multiple layers and unexpected yet gripping plot points. The director made sure he presented it the same way as the original so much, that he cut the trailer exactly the same as that of Andhadhun. No complaints, because the team earlier left the message out that remake movie will either be called an ‘exact copy’ or ‘spoiled’ if any changes are made from the original.

The director could have changed a scene or two in the second half which turns a bit slow at few scenes, but he chose to stay with the original every frame. There are some minor changes like Nabha Natesh’s introduction scene, which do not help much in making it better. Most of the audience might have already watched Andhadhun and these comparisons are inevitable. Some scenes which are exactly the same like Mrs. D’Souza asking the Sub inspector to question Simran ‘casually’, Aishwarya Rai photo on the back of auto rickshaw, which could have been changed to avoid the criticism of xerox copying.

So comparisons apart, Maestro is a one of the very few crime thrillers that has that subtle delivery in Telugu. It has a intriguing plot of a blind person acting so with his own logic of doing it, but slips into neck-deep troubles before turning blind really. While this is just the basic plot intro, the second half deals with many twists and turns at a later point which were all dealt well.

For those who have watched Andhadhun, the scenes where the protagonist’s blind cover is blown, miss the magic in Maestro. Also Nabha Natesh’s role appears more passive than involved in many parts. Radhika Apte’s character has a connect with audience in Hindi, but Nabha Natesh looked more artificial in her role. Also the romantic scenes of Radhika Apte and the glamour of Tabu made the original more attractive, and the lack of those in Maestro is a sort of incompletion.

The interval bang brings a lot of twists and surprises to the second half than the first. So accomodating them all with many sub plots slows the second half a bit. Small actors like Harshavardhan, Mangli and others get to have crucials parts to play in the film in the second half.

For the audience who have not watched the original, this Maestro would be interesting with a lot of surprises. The neat screenplay and cinematography also make it good watch. They will enjoy and intrigued by the plot strength with good twists. But for the audience who already have watched Andhadhun, the comparisons take the front seat and it will be up to them. Maestro release in theaters would have left the fingers crossed as it is a remake of superhit film in Hindi. The makers’ deal to release on OTT is a wise choice.