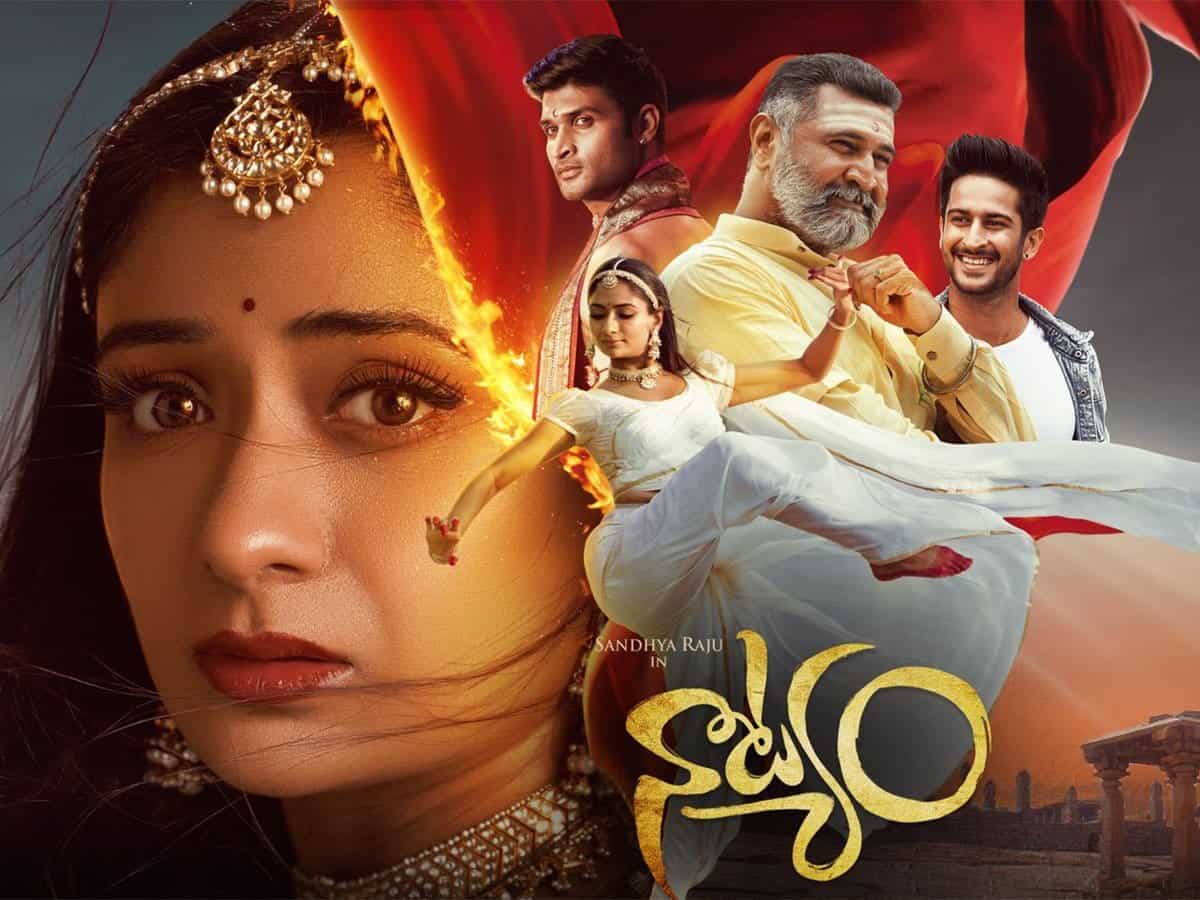 Well-known Kuchipudi dancer Sandhya Raju has turned into lead actress and producer with Natyam. This is her first attempt as actor, producer, production designer, choreographer and costume designer. Her family lineage and her high-profile connections have garnered interest on her debut film. Will Natyam cater to the audiences it is aimed for?

Sitara (Sandhya Raju), a dance lover since childhood, gives up her academic career for dance. She learns classical dance from her Guru (Adithya Menon) and aims to do her Rangapravesam with the story of Kadambari. However, the Kadambari story is jinxed. What is the story of Kadambari? Why doesn’t her Guru want Sithara to turn Kadambari? Meanwhile, Sithara finds her love in the form of western dancer Rohit (Rohit Behal). This doesn’t go well with her Guru’s son Hari (Kamal Kamaraju). Natyam is all about how this triangular love story affects Sithara’s ambition to tell Kadambari story in the form of dance.

Sandhya Raju has surprisingly delivered a decent performance. She didn’t appear as a debutante actress. She carried off the role of Sithara well. Kamal Kamaraju is seen as co-dancer Hari. He has a limited role. Rohit Behal looks good on screen. Adithya Menon as dance Guru is alright. Subhalekha Sudhakar is seen as a temple trustee and he does justice to the role.

Debutante director-writer Revanth has chosen a wafer-thin plot to make Natyam as a feature film. Though it has substance to enhance further and make it more appealing, he fails to deliver an interesting film. The film is messed up with the flat narration. Shravan Bharadwaj’s music is a blessing in disguise. Songs are well-picturised. Dance choreography is appreciable. There are no repeated moves. Each song has different moves which makes it interesting. The computer graphics are amply used in the pre-interval song. Camera work deserves special mention. Better writing and better narration could have saved Natyam. Production values are good.

Tollywood witnessed a handful of films with classical dance as backdrop. Director K Viswanath’s Sankarabharanam (1979), Sagara Sangamam (1983) and Swarna Kamalam (1988) were considered as all-time classics. MS Raju’s Pournami (2006) with dance backdrop didn’t do magic it was aimed at. Amidst this, it is challenging for newcomers Revanth Korukonda and Sandhya Raju to attempt a film with dance as backdrop given that comparisons do arise. But Natyam doesn’t stand anywhere when compared to previous dance films of Tollywood.

In fact, it is not entirely a dance movie as it was projected and marketed. It is a romantic drama with a dance backdrop. The problem with the film is it has a routine premise. It is not different from regular films. There are villains in the village who have vested interests and stop Kadambari story being told to the larger public. But the whole cause looks silly as their purpose isn’t convincing enough. The pre-interval episode which is supposed to stand out leaves mixed feelings. This could have been done in a better way.

The love story and chemistry of the lead pair Rohit and Sandhya Raju needs more attention. There are not enough scenes of them falling for each other during dance classes. The makers should have worked upon some interesting scenes. They look abrupt as the moments won’t sustain. The lip-lock scene was aesthetically shot. The songs bring good relief as they’re eye-candy.

However, poor writing has affected the prospects of Natyam. The entire episode of Sithara leaving for Hyderabad and getting adjusted to the new culture should be shown well. The episode doesn’t add much to the story. It is draggy. Barring these, Natyam is a passable romantic drama with dance set-up. Last 30 minutes is like saving grace for the film as it gets better. Films like these may not be commercially viable. Having said this, one should appreciate the attempt of Sandhya Raju and her courage, passion to make a movie with dance as backdrop. Slowly, audiences may accept these kinds of films. But the viewers certainly expect good writing and direction of a story, so that they get better experience overall.