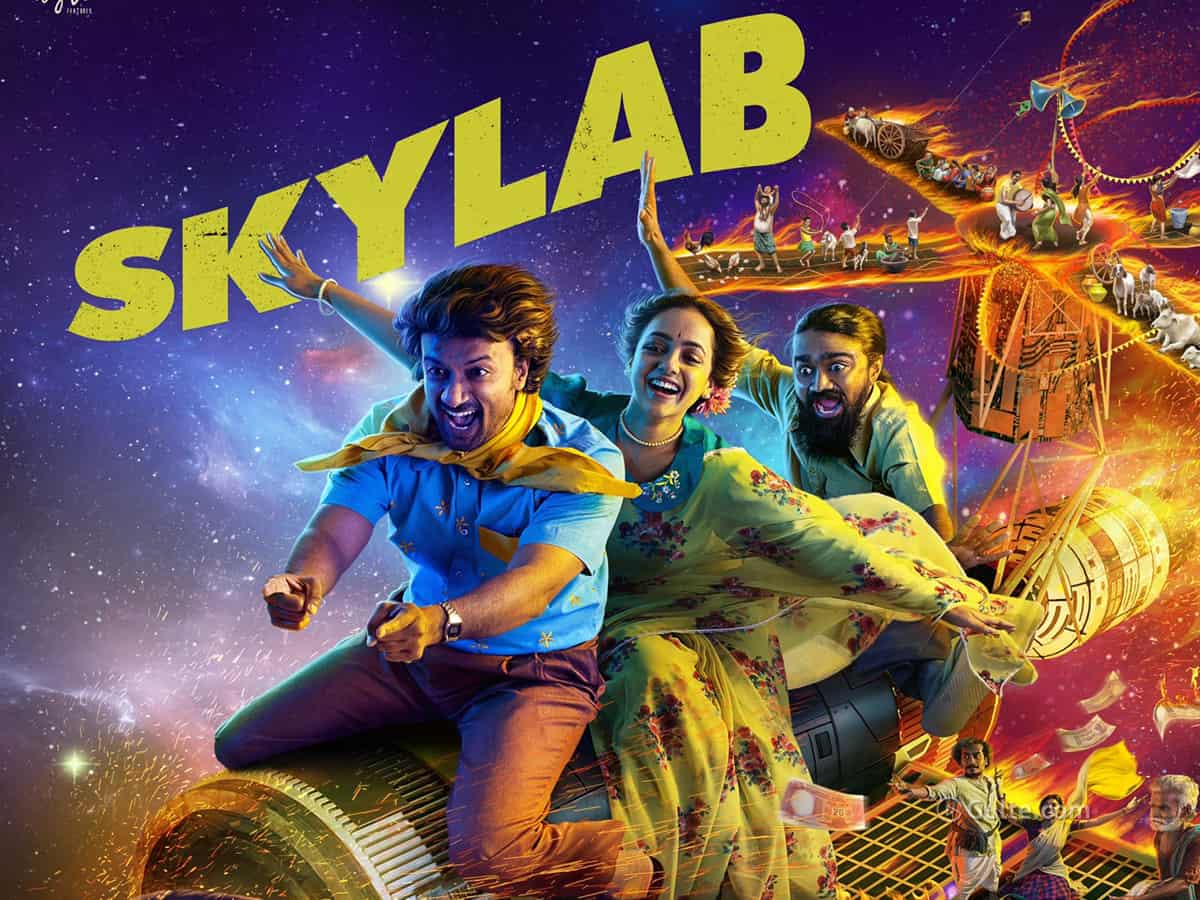 Nithya Menen and Satya Dev are talented actors who choose different scripts. The duo’s collaboration for Skylab did create interest. Interestingly, Nithya Menen turned producer for the film which added to the curiosity. Without further due, let’s find out our take on the movie.

It’s the 1970s. Bandalingampalli is a remote village in Telangana where people live in their world. Gauri (Nithya Menen) is a Dora Bidda. But her passion for writing and journalism made her work for a newspaper called Prathibimbam in Hyderabad. She returns to her hometown when she learns about her father’s sickness. Dr Anand (Satyadev) lands in the village to seek financial help from his pensioned grandfather (Tanikella Bharani) to get his doctor licence back. When his grandfather is reluctant, Anand decides to make money in the village by opening a clinic. Subedar Ramarao (Rahul Ramakrishna) funds this clinic hoping that it would be profitable business. All their worlds come crashing when a space station called Skylab is going to crash on earth. How Gauri, Anand try to use this for their fortune? Did Skylab change their fate? How did it transform their lives? Skylab answers the above.

Nithya Menen has charming looks with neat styling, but she is confined to a role that has no strength. She is overly pampered by her mother. She lives in a psuedo world where her ‘writing’ is great until and unless her childhood teacher tells the truth and opens her eyes. It is a very boring role for Nithya. Satyadev this time disappoints. He is initially projected as streetsmart, but it doesn’t reflect in his actions. At portions, he shows his mark through his natural style of acting, but as a whole, his character has no fireworks. Rahul Ramakrishna as Subedaru Ramarao’s role doesn’t justify. On one side he has a pile of debts and lacks a penny in his pocket, yet he risks huge money on a clinic. Tanikella Bharani’s role has no importance. There are several other characters in the village which don’t leave a lasting impact. None of them are serious enough to care for.

Skylab has an interesting idea on paper. Debutante director Vishvak threaded a story around this concept by setting it up in rural milieu. There are no engaging scenes. Director tries his best to evoke laughs, but it fails miserably. The film doesn’t shine due to its weak writing and snail-paced narration. The screenplay is linear and lacks the twists. Entire movie is predominantly shot in a village. There are no high moments. Background music is alright. Cinematography is neat and recreates the era of the 1970s.

Newcomer Vishvak Khanderao has chosen an interesting premise for his directorial debut. But he failed to deliver an engaging film which has neither thorough entertainment nor a gripping factor to hook to screens. Right from the word go, Skylab struggles with its pace. The film’s narration is dead-slow. Several scenes are stretched out and dragged in the first half. The director wastes a chunk of screen time in establishing the characters. While the interval block brings some interest and hope over the film. The second-half of the film takes a nosedive.

The saving grace is some emotional scenes where Gauri (Nithya Menen) realises what she should write about as her last story and the transformation in Dr Anand (Satyadev) after treating a child in the village. Barring these, the film lacks the depth it is supposed to have. There is a great scope for the film given its unique concept. But the makers fail to make proper use of it.

Dr Anand leaving Hyderabad and arriving in a poor village Bandalingampalli to make money is unrealistic. Even the backstory about the primary health center being shut for 15 years isn’t convincing enough. How Tanikella Bharani changes his mind isn’t shown properly. The film misses out on key logics. That is not all. There is no proper comedy. Director tries so hard to make audiences laugh, but fails.

There are many moments in the film where it tests the patience of viewers. Lack of a love story is a major shortcoming for the film. All these together make Skylab a thoroughly boring watch. In a nutshell, just like the story that is set in the 1970s, the film’s pace also belongs to the 70s. The movie ends on an expected note with a positive ending. All dots are connected and all characters are rounded off.