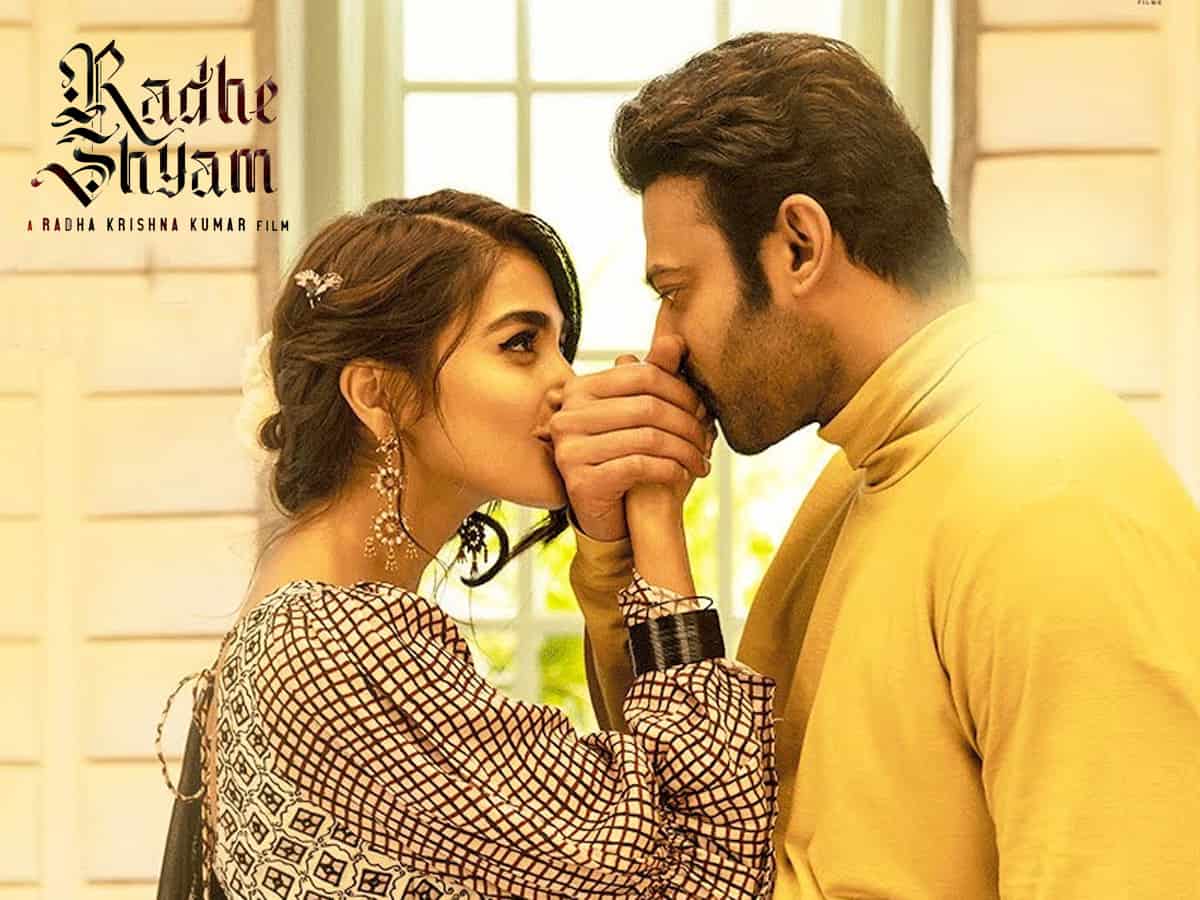 Baahubali made Prabhas a pan-India star and Prabhas’s market has grown multiple folds ever since. After Saaho’s not-so-expected result, Prabhas is coming back to theaters almost after three years with a love story, Radhe Shyam. Prabhas has been promoting the movie as an Indian cinema and is releasing in multiple languages.

Radhe Shyam is a period romantic drama set in Europe. The trailer gives us many glimpses with a revelation that the story is all about the biggest war between love and destiny. Prabhas will be appearing as a famous palmist and Pooja Hegde will be seen as his love interest.

The trailer also gives us a glance at the super classy making and we have to see if the story keeps it up. We have not seen Prabhas in a complete love story for a long time, and let us see if Radhe Shyam is a perfect gear shift for Prabhas’s action mode and how the audience receives it.

Well, the movie is in theaters today, and here is the review from one of the US premieres. Let us check it out if it really is visual poetry as said by many.

A renowned palmist Vikram Aditya (Prabhas) who believes he has no love lines on his palm, falls in love with Prerna (Pooja Hegde), a doctor by profession. Vikram Aditya predicts a full and happy life for Prerna but the latter has got a strong health reason to believe his prediction is wrong. Will the prediction of Vikram Aditya, which was never wrong, win? What will Prerna learn about Vikram Aditya’s ‘no love lines’? Is the Einstein of Palmistry wrong or right or both? The ultimate war between their love and destiny is what Radhe Shyam is all about.

Prabhas did well as the famous palmist. He excels in his role and also the romantic scenes. There are no muscle-flexing scenes and neither is the need for them. He is known to the Telugu audience in these kinds of roles, but we have to see how it goes with the other language audience who know him as the mighty Baahubali.

It is an undeniable fact that Prabhas has lost the charm and looks that he had for and before Baahubali. Though he looked extremely stylish in most of Radhe Shyam, the missing charm can be noticed here and there.

Pooja Hegde looks sharp and very beautiful. She is fine in her role as Prerna. She has done these sorts of roles and it is a cakewalk for her.

Satya Raj appears in a short yet crucial role as Paramahamsa, the guru of Vikram Aditya. It looks like Satyaraj will be seen in Telugu version for US release alone, while Krishnam Raju will be playing the same role for the screening in India. Satyaraj is good as Pramahamsa.

Sachin Khedkar is okay in his role as Prerna’s uncle, which Murli Sharma and others hardly got any dialogue. Jayaram and Jagapathi Babu appeared in pure guest roles. Bhagyashree and Kunaal Roy Kapoor’s roles were very artificial and it doesn’t make any difference without them. It looks like they were included in the cast just to embrace the Bollywood audience.

Priyadarshi and others are okay in supporting roles.

Radhe Shyam is truly a visual delight with captivating frames, hands-down. The vintage lavish sets and the beautiful locales of Torino, Pisa, Georgia, and Rome in Europe are a treat to the eyes.

The songs are beautifully pictured and the background score is perfect as well. Editing is fine and so is the screenplay. The climax ship episode is much-hyped but it fails to live up to the expectations. Rather than gripping, it looks more on the forced way.

Radhe Shyam has got a simple yet intriguing storyline. A palmist who believes his prediction is inevitable has to question the same after he falls in love. In the war between love and destiny, he believes in destiny but takes the side of love.

The director Radha Krishna Kumar stayed with the interesting genre all along, but the narrative went flat with it. The love story and the establishment in the first half go fine until we realize that the spark or the chemistry between the lead pair is missing. Both Prabhas and Pooja Hegde looks great together on screen, but we will not be able to feel the magic between them.

The main point unravels by the interval and the narration goes dead-slow from thereon. While the prediction power of Vikram Aditya is well established with words like ‘Einstein of Palmistry’, Indira Gandhi’s scene, and the train scene, the episode of Jagapathi Babu is clearly predictable.

There are few terribly bad comedy scenes like death-yoga in the hospital and Jayaram’s nosophobia scenes. Avoiding them completely could have been better. Bhagyasree and Kunaal Roy Kapoor looked more like guests at Prabhas’s house than the family. The scenes and conversations between them look unnatural.

The director solely depended on the grandeur to essay the tale, which left the movie just with the good visuals. From the love story to the good-bye scenes, the hospital scenes to the ship-Tsunami scenes, the depth could not be felt nor the emotion. The departing appears strictly a scene after scene thing, rather than being touchy. The ship episode and the Tsunami were much-hyped but looked forced and unimpressive to the point.

There are some good dialogues like ‘knowing that the future is good kills the surprise and learning that that future is bad kills the hope’ and also the archer aspirant asking ‘if a person without a hand cannot have a future. There is one from Prerna asking Vikram Aditya if he had looked for her love line in his palm instead of his. Overall, for a movie lover, Radhe Shyam gives thought-flashes of Geetanjali and Final Destination, but it is nowhere near them.

Director Chandrasekhar Yeleti wrote the storyline of Radhe Shyam eighteen years back and now the director Radha Krishna added his idea of climax for it. The ‘one percent’ logic he brings up regarding the people who write their own destiny and the ’99 percent science’ concept of Satya Raj are the supporting statements brought up by the director to convince ‘Radhe Shyam’. By the end, the logic does not appear extraordinary and the so-called war looks stale.

Bottom line: Only Drusyam, No Kavyam