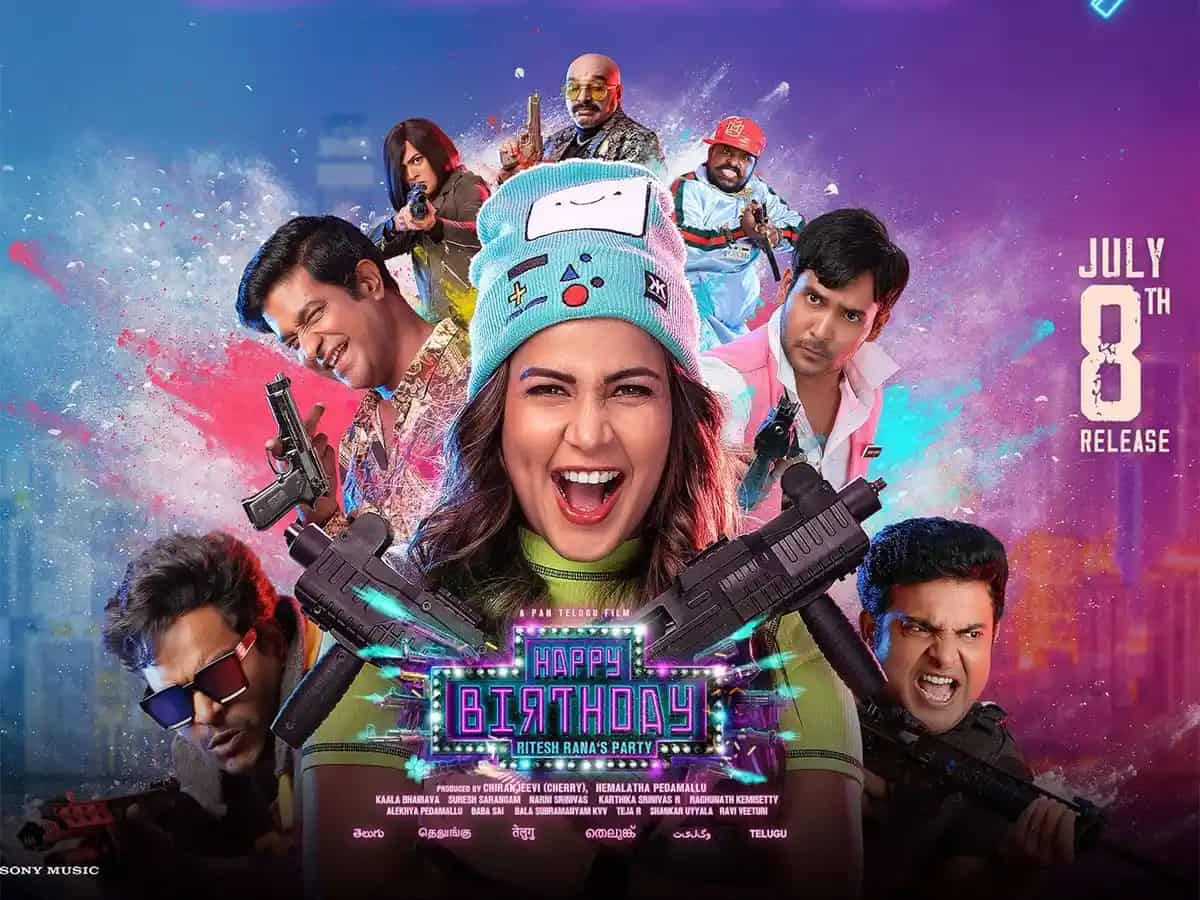 Director Ritesh Rana whose first was a crafty thriller Mathu Vadalara came up with a fantasy world comedy ‘Happy Birthday.’ The trailer is all with unusual and uncanny elements as the director claims it is a ‘surreal comedy’. Lavanya Tripathi joins the Mathu Vadalara-gang Vennela Kishore, Satya, and Naresh Agastya for this crime comedy. The movie is in theaters from today. Here is the review of Happy Birthday.

Union Minister Ritwik Sodhi (Vennela Kishore) gets the gun bill passed in the parliament, increasing the gun culture in the country. Happy (Lavanya Tripathi) goes to Ritz Grand for her own Birthday party and gets drugged. Lucky (Naresh Agastya) works in housekeeping in the same hotel. Max Pain (Satya) is a contract killer who runs ‘A to Z’ services. Each of them has its own story but how they are interlinked to the minister’s gun law is all about Happy Birthday.

Happy Birthday has got a good number of prominent actors in it. Comedian Satya is the show-stealer in Happy Birthday without a doubt. The talented actor nails it as a contract killer, who runs one AtoZ Services. Satya never leaves a scene without making us laugh. His attitude, attire, and dialogues, everything is impressive. His ‘translation’ episode in the climax is hilarious.

Vennela Kishore entertains us as usual and keeps it up for a long time. Lavanya Tripathi is doing this hyperactive role for the first time and she did fine on her part. Naresh Agastya, Rahul Ramakrishna, Gundu Sudarshan, and others are good in their roles.

Getup Sreenu, Vidyukella Rama, Harsha Chemudu, and Rohini appear in small tracks of comedy but their roles are mostly boring and unnecessary. The forced comedy Lucky’s sisters ‘Three roses’ remains the most uninteresting part of all.

Happy Birthday is announced as a fantasy and illogical comedy. The cinematography is kept the same way. The scene compositions and lights are apt for a fantasy world. The non-linear screenplay is good with the main plot in the first half, but the addition of too many subplots and characters spoils the party. The background music is one of the plus points. The dialogues by Ritesh Rana are very random that worked only in parts. He resorted to the meme stuff and viral comedy mostly.

Happy Birthday is an eccentric crime comedy in a fantasy world. As mentioned by the director, the comedy in it is all from a deliberate violation of causal reasoning. Logic-less comedy is the motto, but it doesn’t shine. Too much of it and an unwanted dump of scenes and characters in the latter half make it uninteresting and lackluster towards the end.

First things first, the happenings before and after a Union Minister brings a gun law into the act and a lot of parallel confusion stories interlaced between each of them are all about Happy Birthday. The director Ritesh Rana’s first attempt Mathu Vadalara itself is a unique concept with ‘meth’ as the center, while his ‘Happy Birthday’ is in another world with a gun in its place.

The first half of the film largely deals with each main character visiting us with their stories. The back-and-forth screenplay that links them all only works in parts. It only adds to the confusion. The enthralling first half passes the baton to a lengthy second half which collapses by bringing on many unnecessary characters and subplots. The non-linear narrative was clean in the first half, but it failed miserably in the second half.

There are a few episodes that are extremely boring and unnecessary. The ‘3 Roses’ Sad App track of Lucky is of utmost boring and unbearable. Wonder how the director wanted to continue it until the end. While Lavanya Tripathi’s jail episode and robbery plan are boring to most extent, Viva Harsha’s track is yet another tedious track. ‘Serene Willaims’ part is unimpressive while ‘Ratna’ episode is again intolerable. Also, the exhaustive run time could have become crisp and consistent if the bunch of scenes didn’t exist.

The narrative loses its pace and steadiness slowly, but Satya’s performance stops us from giving up on Happy Birthday. Satya’s role is well written and he lived in it. Happy Birthday appears to have been inspired by many black crime comedies like Lock Stock and Two Smoking Barrels and Lucky Number Slevin. It even has the shades of John Wick and Sin City, particularly with the hotel entry references.

Apart from the suffocating over-the-top comedy, the director managed to bring some laughs with the extensive use of memes and viral stuff. From stating it a pan-Telugu film to the ‘Newsense Tv’, from Aayudh Card to the reference of Vishwak Sen’s ‘Get out of my studio’, Happy Birthday has umpteen number of references from meme and viral stuff, including the sarcastic note during the song. It can’t save this surreal comedy.

Having said that, Happy Birthday is an attempt away from the traditional concept films we usually have. It has its own touch of comedy and it has its flaws. The audience was prepared for a lot of wacky comedy, but a little too much of it backfired here. The exaggerated comedy derailed the latter half, blurring our positive impression of the first half. Happy Birthday falls into the genre of different concept films. But such films don’t find a large set of audiences which is a big drawback. Overall, Happy Birthday failed to entertain. It doesn’t serve its purpose. It ends up as a weird, confusing film but it is not a winner.