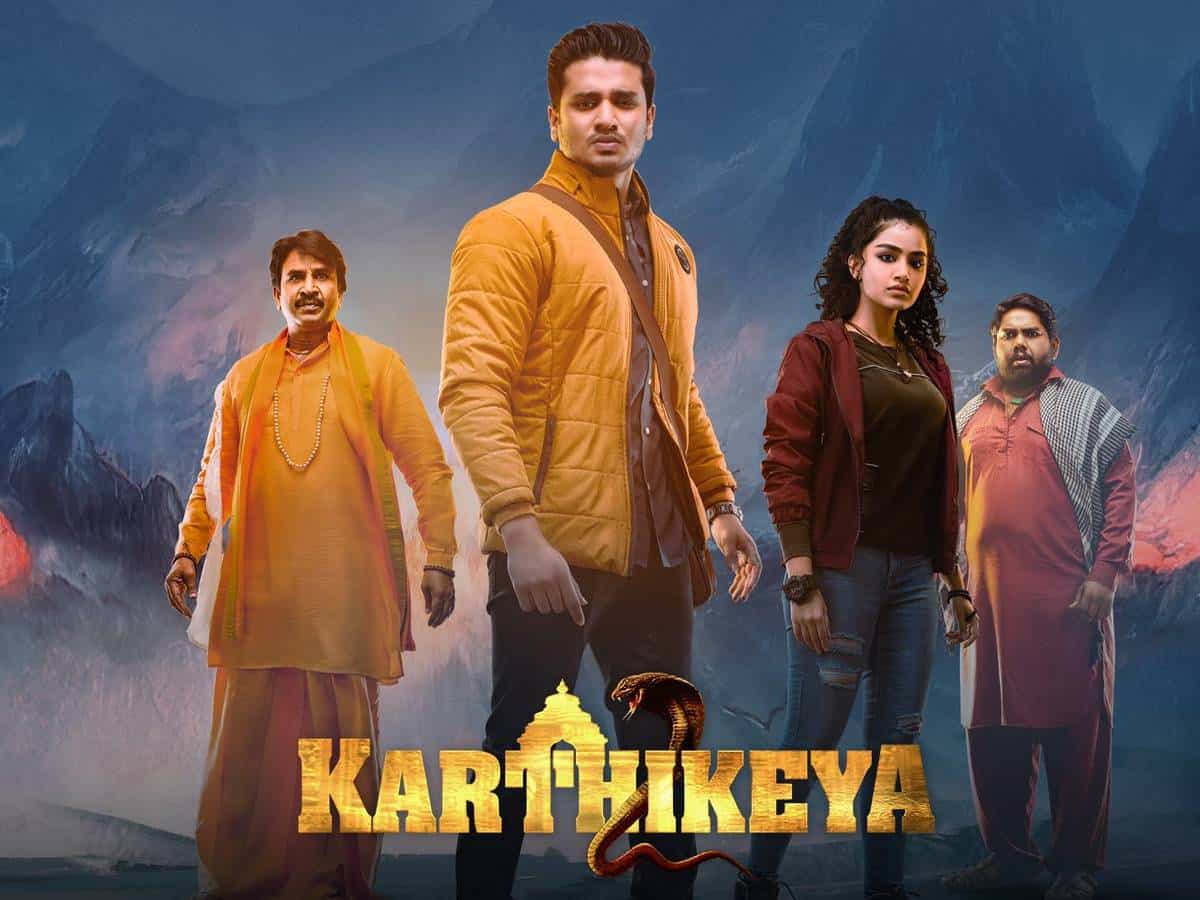 Nikhil Siddhartha’s Karthikeya 2 is a franchise to his erstwhile blockbuster Karthikeya that stood out in his career. The second instalment got a bigger budget with two well-known production houses backing the film, grand visuals, big cast and all. But that is not an easy sail for the film till its theatrical release. After facing multiple postponements, Karthikeya 2 sees the light of the day and let’s check out our take on the film.

Karthikeya (Nikhil Siddhartha) completes his medical studies and becomes a doctor. His quest for knowledge and devotion is intact. He goes to Dwaraka on personal work, but later realises that he gets embroiled into a bigger issue of professor Rao’s muder. He is saved by Mugdha (Anupama Parameswaran) and he learns that Rao tasked him to find Lord Krishna’s sacred and powerful Anklet (Gandapenderam) that solves all the forthcoming problems of people. Karthikeya is on a mission to get the ancient Anklet of Lord Krishna. What are the obstacles he faces and will he overcome them? This forms the crux of Karthikeya 2.

Nikhil Siddhartha as Karthikeya is perfectly apt for the role. He knows his best abilities and optimally uses his strengths. This played out well.  Anupama Parameswaran has a role (Mugdha) that is crucial in the story. But eventually, she gets sidelined and the protagonist Karthikeya takes the centrestage. They don’t share romantic or intimate moments but the romance is subtle. Comedian duo Srinivas Reddy (Sadanandam), Harsha Chemudu (Suleman) did a good job. They got the audience in splits in this serious and engaging adventure. Comedians Praveen and Satya get blink and miss roles. Anupam Kher’s cameo worked out well. Adithya Menone as baddie Shantanu is alright. The writing tones down his role. Tulasi as Nikhil’s mom serves the purpose. All the actors have a part in driving the story forward.

Technicalities
Writer-director Chandoo Mondeti came up with a good story that is amplified with an engaging narration. The tense factor is maintained throughout the film. Kala Bhairava’s background music has elevated the film to the next level. He is a good asset for this thriller. There is only one proper song in the film that just gives good relief. Visuals are grand and VFX work is easy on the eyes. Editing is crisp, despite some slow moments here and there. Production-wise, the film looks rich, shot in picturesque locales of India and Europe.

Thumbs Down
Slow At Some Portions
Cinematic Liberties

Karthikeya 2 is haunted by a major jinx. That is, many Telugu filmmakers in the past failed to come up with good sequels or franchises to the originals. Naturally, this is what pinches the franchise lovers. But here comes Nikhil and Chandoo who successfully broke the jinx. Kudos to the duo who came up with a taut thriller that has tense moments, adventurous acts and some mystery. It has all the elements blended well and that adds up to the story’s narration.

The Dwarka portions are engaging. The journey of Karthikeya where he is on a mission to find Lord Krishna’s Anklet acts as the main layer that gives good edge-of-the-seat moments. Audiences cheer, clap to dialogues on heritage and history mouthed by the protagonist. Though Karthikeya and Mugdha don’t have much romance, their chemistry in finding the powerful Anklet worked. The first half of the film sets the tone and mood of the film whereas the real story is unleashed in the second-half. Nowhere, the makers have not at all deviated from the main plot point which worked out.

Like any other film, Karthikeya 2 has its own shortcomings.The villain has a strong desire but that is not seen in his actions other than sending some bunch of goons to trace the hero and tie the hero to a tree upside down. The villain isn’t as powerful as he was perceived to be. He becomes a mute spectator. The climax appears to be dragged. The attempt to give lead to Karthikeya 3 (franchise) might be a little stretchy. Also, there are cinematic liberties which are conveniently used by makers.

On the eve of 75th Independence Day, Karthikeya 2 is unintentionally a film that revolves around Mera Bharat Mahan. The film is woven around our heritage. It highlights the culture. It also stresses the disconnect between the younger generation and our history and attempts to connect them. In the end, the hero says that “Lord Krishna is our Ancestor. Our Gods are our history.” This sums up the belief of the Karthikeya 2 makers. To an extent, all this looks preachy, but it is told in a convincing way that is where the director and hero succeeded.

Having said all this, Karthikeya 2 has a strong factor – story and engaging narration. The tense factor is maintained throughout. Dialogues do work in the film’s favour. Duo Nikhil and Chandoo once again chose an interesting story – Devotional Treasure Hunt – backed by visuals and terrific background score. They succeeded in getting the franchise right that ought to be watched with families and kids. Go for this, Karthikeya 2 gives you a thrilling ride. Overall, it hits the right chords.