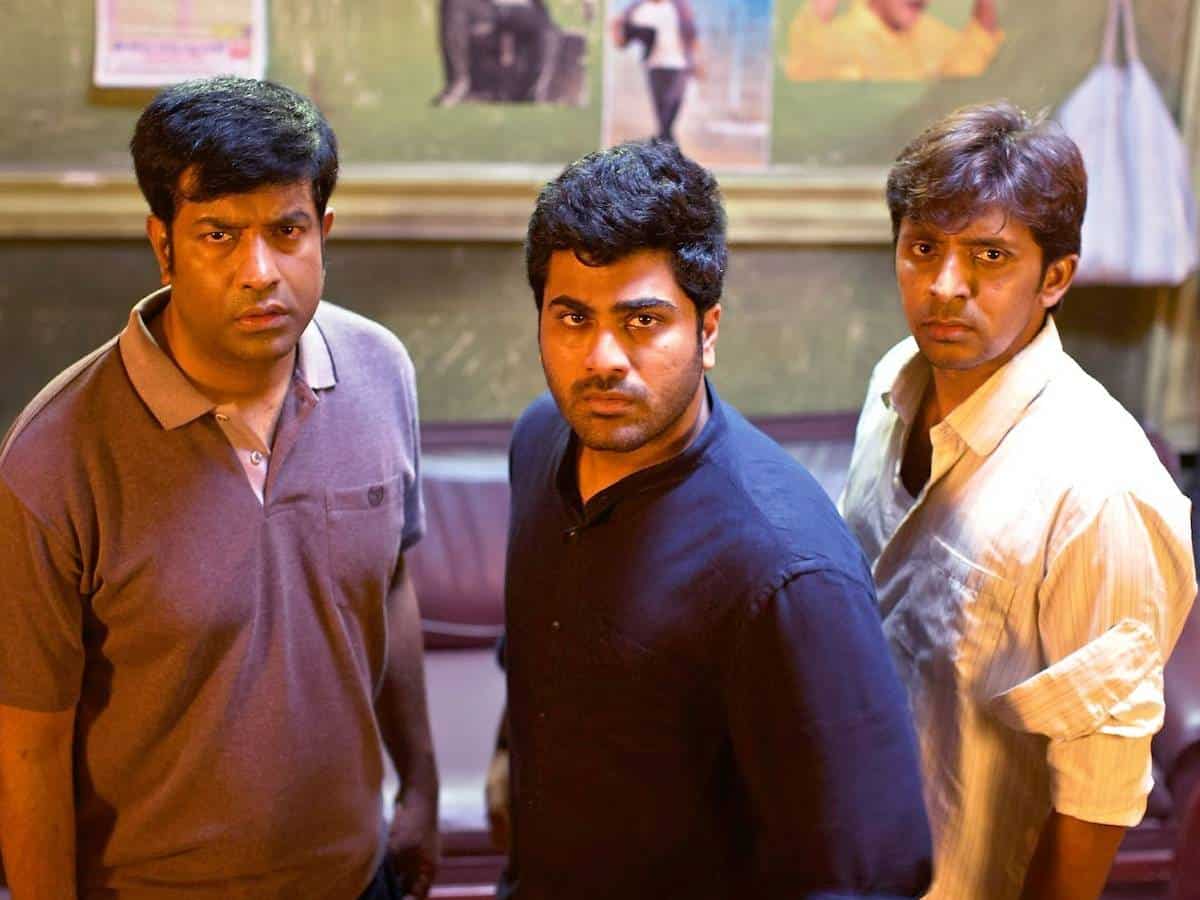 Battling with back-to-back commercial failures, talented hero Sharwanand has opted for a science fiction drama helmed by debutante director Shree Karthick and it is a Telugu-Tamil bilingual film (titled as Kanam in Tamil). Will Sharwa break his jinx and stage a comeback at the BO? Find out, what is our take on Oke Oka Jeevitham.

Aadi aka Kutlu (Sharwa), a wannabe singer, struggles to perform in front of crowds. He has lost his strength – his mother (Amala). His girlfriend Vaishnavi (Ritu Varma) pushes him to overcome. Aadi along with his friends Chaitu (Priyadarshi) and Sreenu (Vennela Kishore) accidentally meets scientist Paul (Nasser) who promises them to send them back to their childhood to change their fates. Aadi decides to meet his mother and save her from the accident that had claimed her life. Chaitu and Sreenu have their own reasons. Whether Aadi, Chaitu and Sreenu achieve what they intended to and what are the circumstances that they come across in this time travel need to be explored.

Sharwanand has delivered a notable performance. He scored well particularly in emotional scenes. He is the right choice for the role Aadi. Priyadarshi and Vennela Kishore are apt for their roles too. Vennela Kishore once again succeeds in getting the room in splits. Ritu Varma is confined to a girlfriend whose only aim is to shape her boyfriend’s career and life. She has no other goal. She is alright in the limited role she was offered. Nasser has got an important role and he is alright. Amala Akkineni as Sharwa’s mother delivers what is expected from her. The three Kids Jay Adithya, Hitesh and Nithyaraj who played younger Sharwa, Priyadarshi and Vennela Kishore respectively did a great job. Young Vennela Kishore’s expressions are worth mentioning. Ali is seen in a short role. Director roped in the apt cast who all delivered flawless performances.

Shree Karthick chooses his plot well. Despite being a first-time director, he does a decent job as writer-director. He scores well in emotional and comedy scenes. However, logic clearly takes a back seat. The slow-paced narration is a major downside. Jakes Bejoy’s music and Sujith Sarang’s visuals elevate the film. Tharun Bhascker’s dialogues are impactful. The production values are decent. While some of the 90s scenes were lifted from the file shots which is understandable though.

Time travel stories are not something we come across often every Friday like the other genres. When they do come, they certainly generate a lot of curiosity and also expectation. Aditya 369, Suriya’s 24, Awe, Adbhutam and in fact, recent Bimbisara, all have the time-travel has the major premise. Sharwa and Shree Karthick’s Oke Oka Jeevitham belongs to the same pedigree, albeit it has different treatment. The previous Time-travel films were mixed with various genres including fantasy, folklore, comedy, love story and et al. OOJ on the other hand relies on emotion – Mother and son sentiment to be precise. The film dives deep into the loss of a son who is finding it very difficult to forget his mother even 20 years after her death.

Director Shree Karthick takes up a time-travel background for the emotional story of the son. When he goes back to the past to rescue her from a fatal accident, will he succeed, will he change the past. Beyond this, OOJ has no larger purpose. The whole point of time travel through a time machine (that is vertical in shape unlike any of the previous time machines we’ve seen before in our films) is alright. The makers keep everything simple and subtle unlike the other time-travel films that are usually very big and larger-than-life.

Initially, the director takes a chunk of screen time in establishing the characters Aadi, Sreenu and Chaitu, their backgrounds and their struggles. However, he weaved their stories well. But the question is are the problems of Sreenu and Chaitu serious enough to care for? Unlike his friends, the lead protagonist has a personal loss of his mother. However, these are passable. The fictional element of the elder version of Aadi, Sreenu and Chaitu meeting their younger selves and teaching them is not really convincing. The logic goes for a toss completely. The slow narration lets down too.

Yet, the under-current emotion in the story is what makes us excuse the shortcomings. The film has its moments. The heart is in the right place when it comes to the emotional scenes. The comedy scenes are the saving grace for OOJ. The light-hearted moments in this heavy-hearted subject keeps it going. The kids’ scenes do work well. Proper care has been taken in depicting 90s scenes. The effort is visible. Dialogues are well-written.

The last 10-minute of the film is satisfying though. It makes one walk out of theatres with some contentment. While the end justifies the means, it is also a lengthy journey. On the whole, Oke Oka Jeevitham works only in the parts and it leaves us craving for more. Had the writing been better and the film been pacy, the film would have been much better. Like it is often said in the film, “Life doesn’t give another opportunity.”