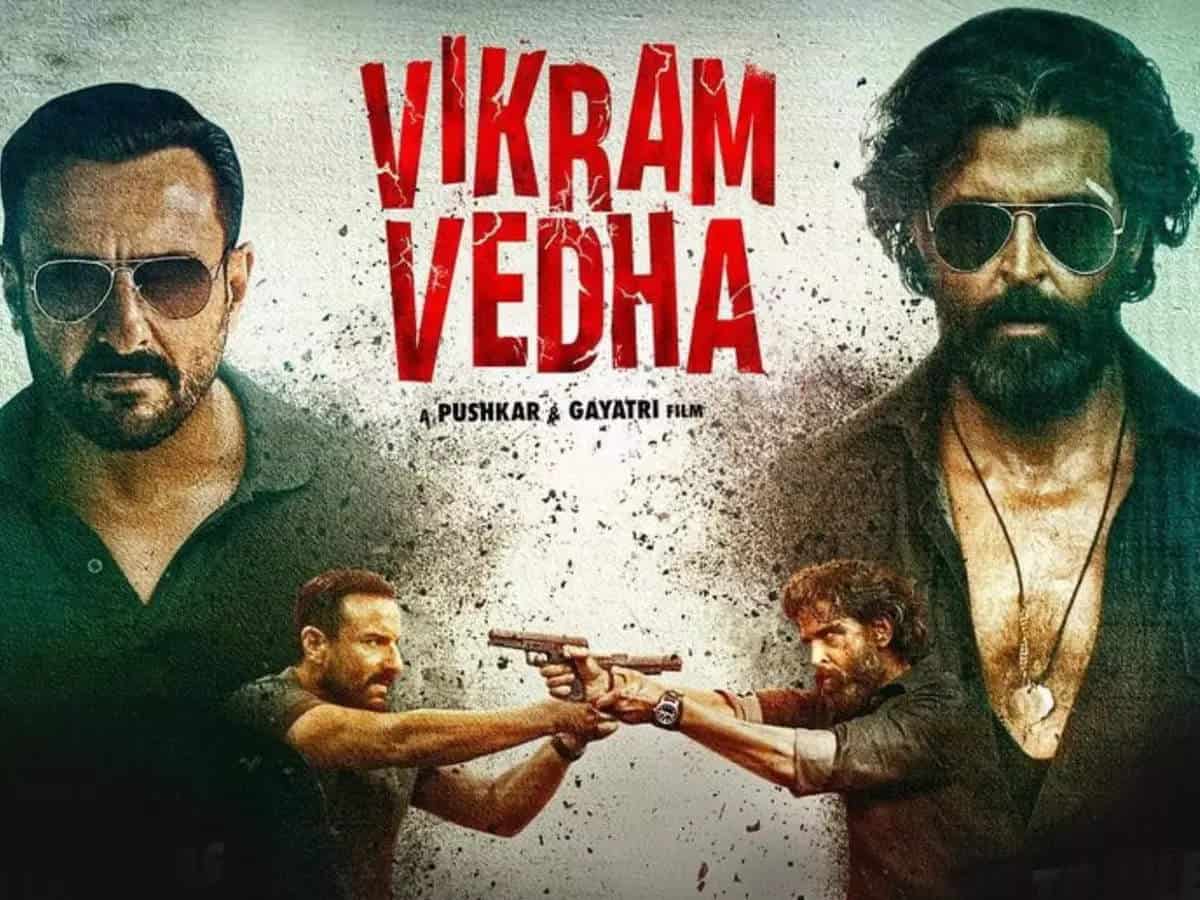 Ever since the buzz of the Tamil blockbuster ‘Vikram Vedha’ getting remade in Hindi cinema started, the filmgoers were curious about the star cast who plays the Cop and Gangster roles that were flawlessly portrayed by Madhavan and Vijay Sethupathi in Tamil. When the makers announced that it’s Saif and Hrithik, the expectations reached Sky. With huge hype, the Hindi version of Vikram Vedha has been finally released, let’s see how it fared.

Vikram (Saif Ali Khan) is a sincere cop who is a part of the team that is exclusively set up to catch a notorious and famed gangster who went underground, Vedha (Hrithik). Surprising everyone, Vedha willingly comes out and gets surrendered within no time, this confuses Vikram and pushes him to confront Vedha, what begins next is a cat and mouse play between these two men with many revelations.

Remakes can well succeed only if he/she who is directing it makes sure the soul of the original drama is properly transferred according to the audience’s nativity/taste at receiving end. It also becomes tricky if one does too many changes in comparison to the original, as someone who saw the original version might comment that “it’s an unfaithful remake” if one retains the original version scenes as it is throughout, someone else who saw the original might comment “it’s an exact photocopy, no changes are done.” So it’s a very difficult task to impress the maximum audience with a remake, having said this, ‘Vikram Vedha’ does some smart things, it has some “new” scenes in comparison to the original in the second half, and also it gets the emotions of original Tamil version right!, with the banger performances of Hrithik and Saif, Pushkar and Gayathri seemed to have hit a boundary with the remake.

Pushkar and Gayatri’s Unique strength is their writing involves this moral dilemma in characters that many mainstream writers have forgotten to write about, especially in Bollywood, so on that front, ‘Vikram Vedha’ is definitely a breath of fresh air.
The way the duo fleshed out ‘Vikram’ and ‘Vedha’ as equally important, and equally balanced is just marvelous.

Their Direction in the opening long shot sequence or the first confrontation scene between Saif and Hrithik or the staging of the interval/Climax was superbly done, and the color semantics (white, black, grey) in the clothes of both the heroes was very nicely put.

One setback I felt is as someone who watched the original, there has been an energy drop in the second half, which of course gets covered by a remarkable climax, but had that energy drop didn’t exist, the second half would’ve been even better.

Saif, as ‘Vikram’ was fantastic, in original Madhavan’s character was a bit too subtle and chill, but Saif brings some seriousness to his character, at certain emotional moments, Saif expresses the pain and dilemma so well that can’t but just admire his acting skills, Madhavan also did a great job at emotional scenes in original but Saif very earnestly brought another layer of vulnerability in his face in those scenes.

Hrithik Roshan’s ‘Vedha’ is a furiously amped Mass-version of Original Sethupathy’s Vedha. And Pushkar-Gayatri made sure the powerful mass aura that Hrithik and his character exhibit is extraordinary. Hrithik was too good in his mass avatar, it felt so great watching him donning this amazing gangster role called ‘Vedha’.

Cinematography by P.S.Vinod is slick, every frame is superbly shot. Songs by Vishal-Shekar are okay, Makers made a good decision by choosing to retain the original Sam C.S’s score for this remake too, that BGM just erupts with unfathomable energy in the theatre. Editing by Richard Kevin is good, watch out for the editing pattern in interval and Climax, it’s very beautifully cut with respect to the context of the scenes.

2nd half Drags here and there
Heroine Radhika Apte’s characterization could’ve been better.

Bottom-line: Overall, This ‘Vikram Vedha’ is a very good remake that does remain faithful to its original and works extremely well at times, for which one can easily give it a shot.