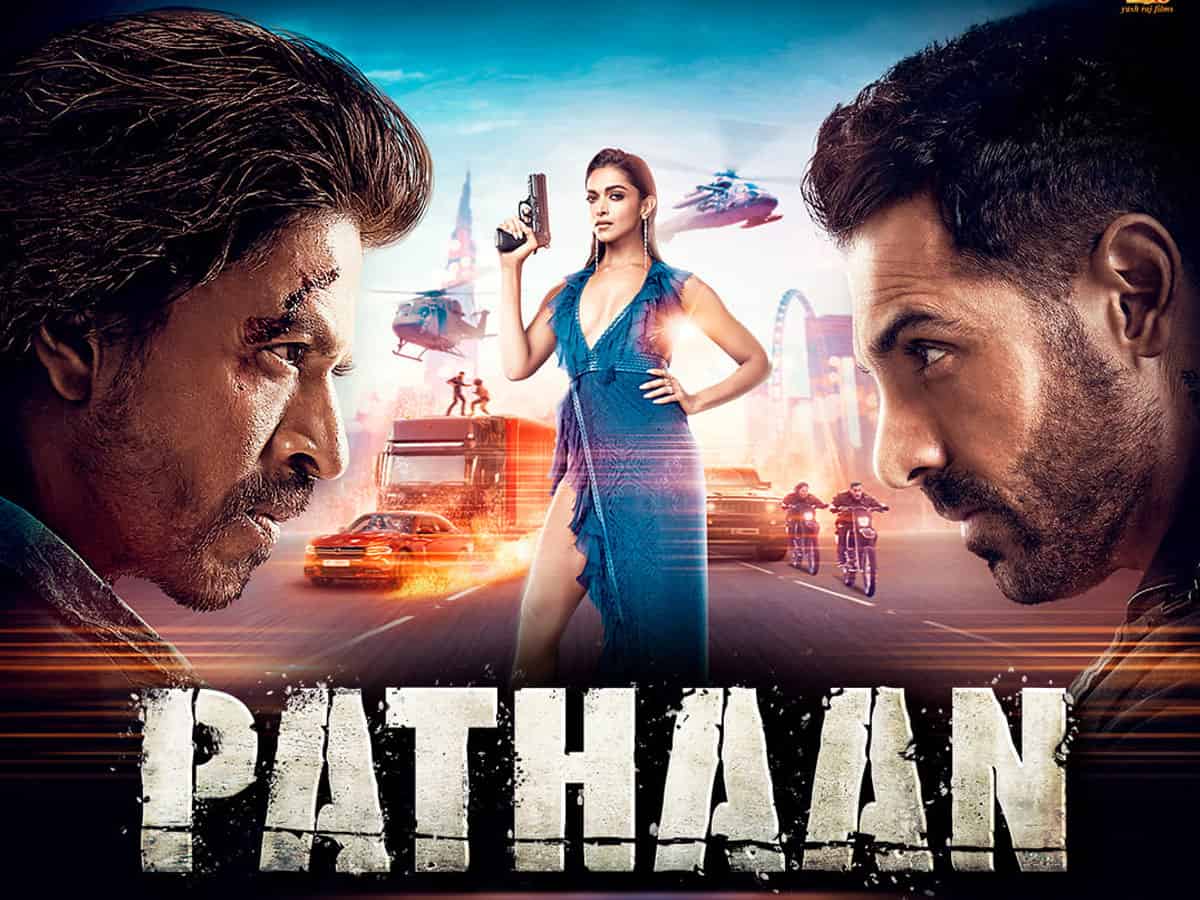 After 4 years of long hiatus, superstar Shah Rukh Khan returns to cinema with Pathaan. He is joined by Salman Khan, Deepika Padukone and John Abraham to make it even bigger. If this isn’t enough SRK teams up with Siddharth Anand whose forte is action thriller and made films like War and Bang Bang! The film expands Yash Raj Film’s Spy Universe – Salman Khan’s Tiger and Hrithik Roshan’s Kabir. Pathaan is creating a sensation at the Box Office. Given the huge pre-release buzz, the film is expected to shatter opening records. Without further due, let’s check out whether SRK made a huge comeback?

Pathaan (Shah Rukh Khan), an undercover agent and patriot, is on a mission to stop Jim (John Abraham) who is an ex RAW agent-turned-terrorist. Jim has a terrible past which makes him go against his own country and lose emotions. This makes him start the world’s most dangerous private terrorist organisation Outfit X. Jim hires Rubina Khan (Deepika Padukone) an ISI agent for his mission Rakhtbeej. How does Pathaan abort the Rakhtbeej mission?

Shah Rukh Khan undoubtedly delivered an astonishing performance. Be it action or romance, he dominated the screen. Deepika Padukone scorched the screen with her glamour. She is not confined to a glam role. Her role has substance and part of plot twists where she carries forward the story. However, her role reminds us of Scarlett Johansson in Hollywood films. Johan Abraham is the powerful and ruthless antagonist. He has a backstory that justifies his present. Salman Khan’s stunning cameo is a big hit with the masses creating whistles and claps. He along with SRK rocked an action sequence giving a jugal-bandhi experience to action lovers. Dimple Kapadia’s role has an emotional touch. Asutosh Rana as Colonel Luthra is a cliched weak boss who heavily depends on his junior Pathaan.

Siddharth Anand is a master of action thrillers and he proves this again. He got all the necessary ingredients to make a perfect action thriller which gives a visual treat. The scale, style and treatment are all in the favour of commercial action film. Dialogues cater to the crowds. Songs are appealing, thanks to Deepika. Sanchit and Ankit Balhara’s music works. However, the film is stretched. Particularly, the viewers have to patiently wait for the climax though knowing the story. The film lacks the emotional connect.

Director Siddhart Anand delivered a spy thriller camouflaged with high-octane action stunts set against grandeur scale with an ensemble cast including SRK, Deepika, John Abraham, Dimple Kapadia and Bhai Salman Khan’s stunning cameo. No doubt, this is a terrific formula to deliver six at the Box Office. That is exactly what the film is doing at the box office upon itgs opening.

Right from the introduction of SRK with an action episode, the protagonist takes on the armed goons effortlessly. Though he gets beaten badly with all bruises and knife attacks, the superstar hero eliminates tens of baddies with ease. This is a pure masala commercial film where logic takes a backseat. There are choppers, mid-air fights, a robbery sequence, a village in Afghanistan which loves Pathaan, forming a team (JOCR) with wounded soldiers.

SRK’s chiseled body and shirtless show of his body with six-pack abs are going to swoon his fans. He proves yet again he has a great charm and he is the Baadshah of romance. His chemistry with Deepika Padukone is stunning. Her glam treat in bikinis is eye feast. John Abraham is shown as a powerful antagonist this is where this action thriller worked brilliantly with masses. There are single liners. Some of them worked well. SRK Everything in Pathaan is formulaic. It all looks artificial and cinematic, lacking necessary emotion.

The first half is gripping with an interesting interval twist. The second half drags a lot. The pre-climax sequence on the bikes in ice is alright. The film has several action blocks designed keeping the action lovers in mind. With some expected twists and lack of gripping moments, Pathaan is an average film which is strictly for action lovers and fans of SRK. Even at the end when a plane carrying 300 passengers is at stake, it doesn’t bother the audience enough. It is very clear that the superstar hero saves everyone with a happy ending. Throughout the film, it is very evident that the makers played it to the galleries. The action scenes seem inspired from Hollywood films like ‘Fast and Furious’, ‘Mission Impossible’ and several others.

SRK and Salman’s conversation at the end of the film on passing the baton is interesting and he sums up, “We can’t give this to kids” and “We have to do it for the country”. This strikes chords with the fans of seasoned stars SRK and Salman.

Pathaan is a film with no great writing. But the film is stylishly made with several forced sequences to make it visually appealing for masses. With all masala ingredients, Pathaan is a Paisa Vasool film made for action aficionados and SRK’s fans. Keep your expectations low on spy elements.

Verdict: SRK IS BACK WITH BANG