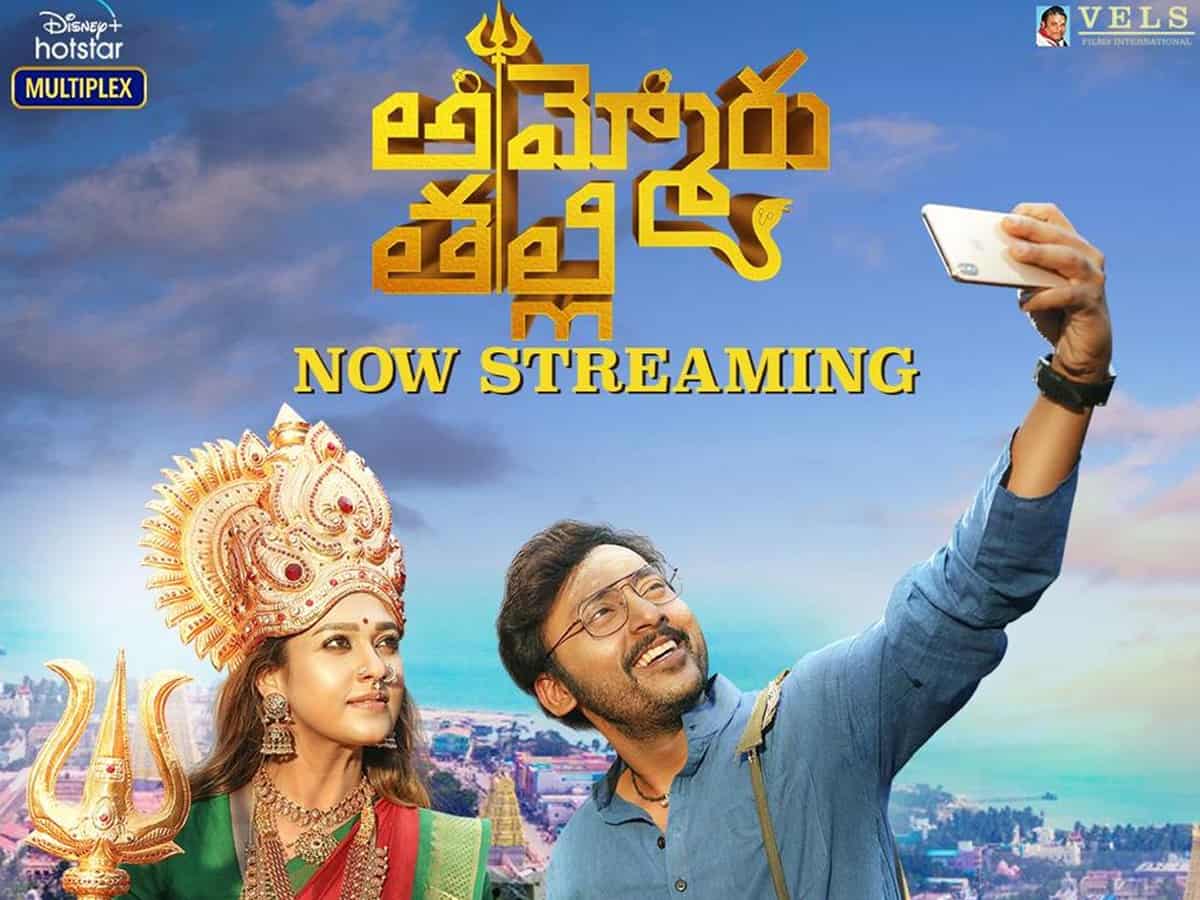 Ammoru Thalli is the Telugu dubbed version of Mookuthi Amman (Mukkupudaka Ammavaru) starring Nayanthara in the lead role. It is a fantasy comedy directed by RJ Balaji and N.J. Saravanan.

Engels Ramasamy (Balaji) is a small time news reporter in a village. He is the sole bread earner of his family consisting of six people. He is rejected by more than a dozen girls because of his financial status. He seeks the blessings of Mukkupudaka Ammavaru (Nayanthara) to get him out of trouble. The Goddess asks him a favor in return! She asks him to make her famous like Tirupathi Balaji. What is the reason behind her weird request?

Nayanthara wasn’t even asked to dye her golden colored hair to play the role of a Goddess. All she has to do is to look divine and convincing as the Goddess. She is effortless in doing that. RJ Balaji is okay in the role of a commoner, but he has gone overboard in a few comedic sequences. Urvashi steals the show with her comic timing. Ajay Ghosh’s performance is uneven. Mouli is okay.

Direction is strictly average. The directors duo has lost the grip on the narrative after the intermission point. The sequences where the protagonist brings down a fake Godman are not convincing enough. Even the comedy scenes are not always on point. Some are genuinely hilarious and a few are outright silly. Technically the film is okay with a decent background score, cinematography and production design. Editing could have been better. Production values are fine.

Satirical dramas targeting fake godmen are not new to cinema. Movies like PK have set the bar high for such concepts. RJ Balaji’s Ammoru Thalli tries to keep it simple and drives the message home without taking itself too seriously. The initial setup is fun with Urvashi in top form. The film runs at a good pace until Nayanthara enters the scene. It keeps us entertained despite a couple of over the top comedy scenes until the actual plot begins.

The film’s main theme is to target the fake godmen that are occupying thousands of acres of land for their ashrams. This is where Ammoru Thalli starts to slip. There is not even a single effective scene in the second half when the protagonist takes on the fake Baba. The portions where the news reporter exposes the fake Baba lacked effectiveness. RJ Balaji filled this part with many cliched scenes and he couldn’t even deal with it in a funny way.

While the first half of Ammoru Thalli has some genuine fun moments and good dialogue, the second half is filled with cliched drama that restricts the film to be a strictly average fare. All things considered, it is an okay watch for OTT audiences, but there is so much potential for it to be a much better film. RJ Balaji should have gone hard in exposing the fake godmen and could have focused more on their methods behind the curtains.

Ammoru Thalli is not as boring as most of the recent OTT movies but it is also not a wholesome entertaining treat altogether. It is a middling satire that only works in parts, which you can stream at your leisure.